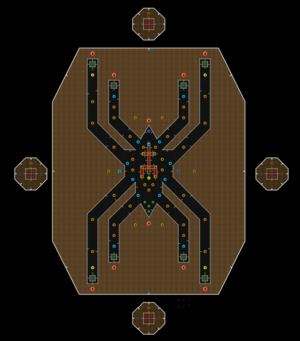 This is the final level of the game, and is a simple arena.

This is a simple arena mission, where you fight against up to eight Maulotaurs. On easier difficulties, you only fight three, while medium provides six.

When the map starts, you will see a generous layout of items. Collect all but the Silver Shield (unless you prefer depleting it before obtaining the Enchanted Shield). At the north of the trident is a set of Wings of Wrath. Activate them and fly through the middle trident to open the arena. 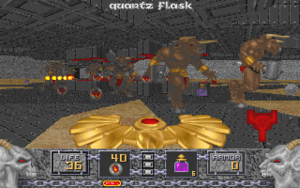 Maulotaurs attack all at once.

There are two important items revealed once the arena is opened - the Tome of Power, and the Enchanted Shield.

Fighting the Maulotaurs requires a simple pattern - circle around the edge of the arena, and fire into the group. There is no significant exploit, such as using monster in-fighting.

One possible tactic is to use a Ring of Invincibility, a Tome of Power and the Phoenix Rod. This combination allows you to approach a group of Maulotaurs and inflict significant damage.

In general, this map takes approximately 10 minutes to complete.

There are no secrets on the map.

In multiplayer, some players may appear in the isolated sections just outside the main arena, with these sections teleporting players to the southern tip of the trident. Aside from a few additional Morph Ovums at the extreme north and south, the map is otherwise similar to singleplayer.