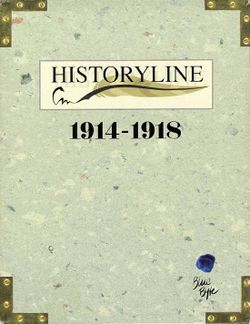 History Line: 1914-1918 (released as The Great War: 1914-1918 in the US) is a turn-based tactics computer game developed in the 1990s by the German developer Blue Byte Software. The storyline takes the player through various battles of the First World War. It uses the same split screen mode as Blue Bytes Battle Isle series of games.

The storyline takes the player through various battles of World War I where he can choose to play either the French or German side. There are 24 single-player maps in the game, after each one the player receives information about the course of the war (the game is linear - it is impossible to change history). The game starts in August 1914, with Germany invading France. As during the real war, the open greenfields of the first battles, dominated by cavalry, are gradually replaced by landscapes scarred with trenches and bunkers; as the number of tanks, artillery and aeroplanes increases the cavalry and infantry troops become progressively less effective. New units became available as the game progresses, such as A7V or Mark IV tanks.

The game also includes a lot of information about the period: after each mission, historical facts about two months of wartime are displayed. Informing players about the causes and conduct of the war was one of the aims of the game, which begins with a brief animation depicting the Western Front in 1916, followed by a sequence showing the assassination of Archduke Franz Ferdinand of Austria, heir to the throne of the Austro-Hungarian Empire, whose assassination in Sarajevo precipitated the Austrian declaration of war which triggered World War I. Between the battles, text and illustrations taken from contemporary newspapers appear, keeping players up to date with key events in the course of the real war, as well as providing nuggets of interesting domestic news from the countries involved – such as sporting events. Animations depict notable incidents, such as a zeppelin flying above London Bridge during a bombing raid.

The game uses a software engine very similar to Battle Isle. It is played on a hexagonal grid for a map. Both players act simultaneously on a split screen, each showing a part of a larger map. The turns are also divided into move and attack (order) phases. While one player moves his units, the other commands his own troops to carry out his actions.

The objective is to capture the enemy's headquarters building (while guarding your own); the victory can also be achieved by annihilating every unit the enemy controls. The maps have various features - different terrain types, as well as depots (to repair units) and factories (to produce units) as buildings. Captured building may contain 'free' units. The units gain experience; however, this experience isn't carried over from mission to mission in campaign mode.