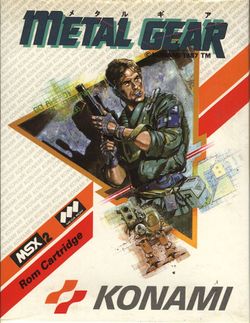 Metal Gear (メタルギア, Metaru Gia?) is an overhead military action-adventure game originally released in 1987 by Konami for the MSX2 computer standard in Japan and parts of Europe. Considered to be the progenitor of the stealth game genre, it was also the first video game designed by Hideo Kojima, who also directed many of the later Metal Gear sequels. The game revolves around a special forces operative codenamed Solid Snake who goes into a solo infiltration mission into the fortified state of Outer Heaven to destroy Metal Gear, a bipedal walking tank capable of launching nuclear missiles from anywhere in the world.

Most of the radio messages were edited or removed in the English version, including Big Boss' comments on every item and weapon found by the player. According to a fan-translation project, only 56% of the original Japanese text was translated in the English version. The official translation contains many examples of "Engrish", such as consistently misspelling "destroy" as "destoroy". The Japanese version's manual contains exclusive content not found in the English manual, such as character profiles with illustrations, brief descriptions of the enemy bosses, and the complete specifications of the Metal Gear tank.

A heavily altered port was produced for the NES (without Kojima's involvement). A version of Metal Gear was released for mobile phones in Japan on August 18, 2004. Although based on the MSX2 version, it includes several new features and changes. This same version was included as a component of Metal Gear Solid 3: Subsistence for the PlayStation 2. The North American version included a re-translated English script. In 2008, Konami began offering the mobile phone version of Metal Gear to North American players via their Konami Mobile service. The re-released versions were programmed by Aspect Co., Ltd. under Konami's supervision. It is also available for Nokia N-Gage gaming platform. The MSX2 version of Metal Gear was released for the Wii Virtual Console in Japan on December 8, 2009.

Translated from the Japanese MSX2 and Famicom version's manual:

"Near the end of the 20th century, a special forces unit was founded in secrecy in order to deal with local insurgency, regional conflicts, and terrorist activities. Its name is Special Forces Group FOXHOUND. The unit specializes in carrying out unconventional warfare by infiltrating into hostile territories in total secrecy which are too politically sensitive to intervene through normal military force. They are regarded as the modern day equivalent of ninjas."

At South Africa, 200km north of Garzburgh, lies Outer Heaven, a fortified military state founded during the late 1980s by a mercenary who was said to be a hero and a lunatic at the same time... Something was now amidst at Outer Heaven. A dreadful new type of weapon of mass destruction that could change the history of warfare was being developed. Gray Fox, a member of FOXHOUND, was sent to gather information on the new super weapon. However, contact with Gray Fox is lost several days later and his last transmission simply says "Metal Gear"... Could Gray Fox's disappearance be evidence of this new weapon?

Orders are given to FOXHOUND once again. This time, the infiltrator is Solid Snake, a rookie soldier who was recently enlisted into FOXHOUND. His objective is to ascertain the whereabouts of Gray Fox, uncover the true nature of Metal Gear and destroy it if necessary.

Alone and armed with nothing but a wireless transceiver, Solid Snake is sent to the battlefield for the first time. It is said that Outer Heaven has gathered many of the world's most elite mercenaries from several nations. Can Solid Snake truly carry out his mission?

"Solid Snake." The voice of Big Boss, the supreme commander of FOXHOUND, came out from the transceiver. "You're not in a field exercise, this is actual combat! I'll wish you good luck." He began hearing the sound of gunfire inside his head...