The final fight in the game is against Spacetime Emperor Salamander himself. He can take three different forms. The forms are described below. The solution to defeating the final boss is an unusual one. It has been described in a spoiler window in case you want to figure it out for yourself.

How to defeat the boss 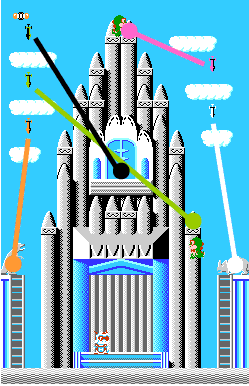 In order to defeat Salamander, all you must do is gather the five swords that you have collected from the bosses and situate them into the correct locations around the palace. The map to the left will show you where each one needs to go. Simply walk up to one sword at a time, and walk to the place where it must be placed. The sword will immediately appear when you reach the right location. The black sword must be saved for last. Unless the other four swords are placed in their proper location, you will not be able to set the black sword down. As soon as all five swords have been placed in the correct locations, Salamander will be defeated. This is why, even though you may opt to fight the him when your game is over, you will never actually be able to defeat him unless all five of the swords have been collected.