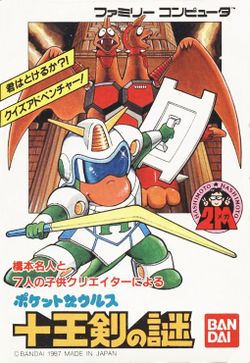 Pocket Zaurus: Ju Ōken no Nazo (possibly translated as "Pocket Zaurus: Mystery of Ten Kings Swords", the Ten Kings are the ten judges of hell who review the conduct of the recently deceased) is an action game developed by Bandai and published in February 1987. At the time of this game's release, Bandai produced a line of dinosaur pens, stationary, and similarly theme school supplied under the label Pocket Zaurus. As such, the game itself has a slight educational aspect to it.

The game is a horizontally scrolling action game. You control Hashimoto-Zaurus, named after Hashimoto, an employee of Bandai who presumably invented the concept of Pocket Zaurus. Despite sharing the name with the product line, characters which resemble those used in the product are hardly ever seen, and the enemies are not at all related either. The idea for the game was submitted by a reader of the game magazine "Family computer Magazine," which was published by Tokuma Shoten.