Turnabout Corner begins with an unimportant message, and three crimes: a hit and run, a theft, and of course, a murder. 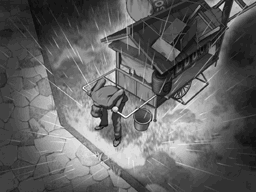 Apollo Justice Since his mentor's arrest, Apollo has lost his job and has hit rock bottom as of the time of this case. He has no choice but to go to the Wright & Co. Law Offices. But Phoenix is no longer in the law business?

Wocky Kitaki The gangster son of the local mob family. He is loud, easily angered, and acts badly just because it's "manly". Can you prove someone who is likely to commit murder innocent?

Pal Meraktis A surgeon who owns a successful surgical clinic. What happened to make Wocky hold a grudge against this man?

Klavier Gavin Prosecutor by day, rock star by night, Klavier also happens to be the brother of Kristoph Gavin. He has a teasing nature and sometimes even "rocks the courtroom". Let's just hope he isn't mad about his brother.

Wesley Stickler A first-class university student who takes pride in his research on the mysteries of life. Why exactly was he out in the middle of the night to witness the murder?

Alita Tiala Wocky's fiancée. Shy and soft-spoken. How did she even witness the murder, though?

Trucy Wright Magician and self-proclaimed "CEO" of the "Wright & Co. Talent Agency" who happens to be Phoenix Wright's "daughter". Trucy is bright, enthusiastic and perky. Disregarding Wocky, she also has a problem, rather than a trick, up her sleeve (or lack thereof).

Detective Ema Skye A young detective who actually wanted to be a scientific investigator. She uses scientific tools to help along her investigations. Years ago, her sister was one of Phoenix's clients and now she can aid you in your investigation.

Guy Eldoon A grumpy man who owns a noodle stand Phoenix and Trucy visited often. Now, however, his noodle stand has gone missing and he wants you to find it for him.

Phoenix Wright An undefeated poker champ who used to be a defense attorney. As you saw in the last case, Phoenix still has his lawyer skills. What has become of his office since he lost his badge?

Plum Kitaki Don't let Plum's friendly and motherly demeanour fool you; she's the wife of a mob boss, after all. She is the mother of Wocky and usually cleans the place up.

Winfred "Big Wins" Kitaki A dangerous looking man who looks after his family. Apparently he and his son, Wocky, don't get along very well.

Director Hickfield A nutty and perverted man who claims to be a doctor at the Hickfield Clinic. Doesn't he look familiar to veteran Ace Attorney fans?

Wright & Co. Talent Agency Not the place you would have expected it to be. This used to be the "Wright & Co. Law Offices" before Trucy took over.

Hickfield Clinic Room A hospital room where patients are "held".

People Park Crime Scene The crime scene itself. Things are getting worked up here. Is that a noodle stand?

Dr. Meraktis' Office The victim's office. It looks like something happened here.