The flashback starts with a poker game. The two finish off with full houses. One of them loses, and it's the second time he lost. The first time was against the man he "killed". He has made a decision or a partner. He asks for a certain man to defend him.

This is how Phoenix Wright and Zak Gramarye first met.

Before we get started, let's look at what the case is about. 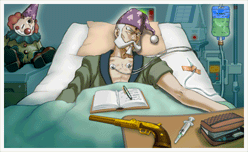 The characters listed here are the people you encounter here and after the case.

Shadi Enigmar (aka Zak Gramarye) Phoenix's last client. Zak was part of a famous group called Troupe Gramarye. He is now considered legally dead... or is he?

Magnifi Gramarye Shadi's mentor, whom he refers to as "father". One of his students shot him to death. Why? He was going to die anyway due to cancer!

Klavier Gavin Your rival prosecutor. Phoenix faced him on this final case. What did Klavier do to strip of him of his attorney's badge?

Valant Gramarye Shadi's partner at the time. What is his role in this case?

Apollo Justice A good friend of Phoenix. Apollo saved him from a "guilty" verdict once.

Trucy Enigmar/Wright Daughter of Shadi. What is her role in the legendary case?

Detective Dick Gumshoe One of Phoenix's old friends. Gumshoe is quite slow and sometimes stupid. Those who played the games before this may remember Gumshoe very well.

Drew Misham A forger who can make anything (actually his daughter does).

Vera Misham Even at this time, she can copy things perfectly. A prodigy of art, if not forgeries.

Spark Brushel Over-energetic and painfully curious, Brushel is an interviewer who makes the stupidest headlines ever. He seems to be a friend of Valant.

Kristoph Gavin Kristoph was a defense attorney at the time. What was his role?

Mike Meekins A twitchy and clumsy police officer who changed his job to a bailiff.

Shadi Smith A world traveler who died seven years after the case. Apparently, Kristoph had a motive into killing him.

Thalassa Gramarye Who knew the Troupe Gramarye had a woman of the trio? She is Trucy's mother, who is now missing.

Wright & Co. Law Offices This is where Phoenix used to work at.

Defense Lobby No. 2 This is where Phoenix usually prepares for trials.

Detention Center This is where criminals are held at.

Drew Studio This is were Vera and Drew live together. Apparently, they just moved in.

Sunshine Coliseum Valant is willing to make a comeback here.

Borscht Bowl Club This is where Phoenix works now.

Solitary Cell 13 The title pretty much describes the room. It looks pretty sophisticated for a place for criminals.

7 Years Ago: Trial Mode (With Phoenix)[edit]

You meet your client, Shadi Enigmar. You have received a report that Enigmar had a previous attorney just yesterday, so you aren't even prepared (as usual). Just then, a little girl drops by. She is Enigmar's daughter. She is here to bring you what looks like a notebook page - something out of someone's diary. The girl didn't know how it got here, but they said to give it to the "old boy in the blue suit with the spiky hair." That's you all right! The Notebook Page will be added to the Court Record.

You have heard recently that your opponent is a "true thoroughbred in the history of the prosecutor's office." Not a big deal since you have faced one every year. Enigmar will tell you that the court will not announce a "Guilty" verdict; in fact, there won't be a verdict at all! Trucy (the daughter) agrees with her daddy. It looks like Enigmar is Zak Gramarye.

After a brief history of Enigmar, also known as Zak Gramarye, part of the Troupe Gramarye, and his boss Magnifi Gramarye, who was shot dead with Zak the suspect, you enter the courtroom.

Ah, feel the nostalgia, the background, the music, and of course, Phoenix! You are introduced to your new opponent, Klavier Gavin, brother of defense attorney Kristoph Gavin and lead singer to the Gavinners. He will call up a familiar face to the stand.

Well, if it ain't our old friend Detective Dick Gumshoe, homicide detective down at the precinct? He seems confident about his testimony. The Judge has him describe the events at the crime scene:

Six days ago at General Hospital, the victim, Mignifi Gramarye, was a patient until one of his students shot him dead. Magnifi retired years ago after putting millions under his spell. He was at the hospital because he had liver cancer. Magnifi's Chart will be added to the Court Record. Klavier will say that Magnifi also had a serious case of diabetes. He presents a Small Syringe, which will be added to the Court.

If Magnifi had only a couple of months to live, why did one of his students kill him now?

Gumshoe will testify about the circumstances of the shooting.

Magnifi ordered his pupil to kill him?! Klavier will present a letter that says so, telling Zak to kill him. Magnifi's Letter will be added to the Court Record. It says that Zak "[could] not refuse, and [they] know the reason why". Gumshoe says that Zak wouldn't say anything about the matter. If it says to meet at 11:05, why didn't he just say 11:00 PM? Klavier says that every 11:00 PM for half an hour, Magnifi would be given an IV drip. He would be alone until the doctor came back for an empty bag.

You will now start a cross-examination. Just what did the letter meant by "reason he can't refuse"?

Press on the 3rd statement. It looks like Zak followed the letter, as traces of gunpowder were found in the head. When given the choice, say that Zak shot something else. You will examine the photo. Present the clown's forehead on the left side of the picture. It looks like Zak did as he ordered by shooting something in the forehead, by shooting the doll's forehead instead. Klavier objects, saying this doesn't mean that Zak is innocent. 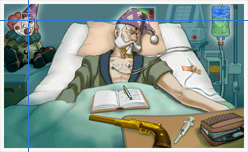 Gumshoe will add a new statement.

Ignore this for now and Press on the 4th statement. The gun was the one in the photo. Ballistic markings prove that the bullet in the head was fired from that gun.

Press on the 5th statement. They were using the pistols for their acts, of course. They would stand with a girl in between them and shoot, hitting everything else on stage. One day, however, they stopped using the bullets and Magnifi held onto them since.

The Judge will ask to see the pistol. The pistol is a prop, but it's real. It can only hold one bullet, the barrel is empty, and no fingerprints were found, possibly due to the fact the killer was wearing gloves. The Stage Pistol will be added to the Court Record.

Now, Present the Stage Pistol in the added statement (statement number 6). The pistol can only hold one bullet, right? So if Zak shot the clown's head first, he wouldn't have another to shoot Magnifi. Klavier argues that he might have reloaded. You counter it by asking where the extra bullet was.

Klavier sees no point on continuing Gumshoe's cross-examination. Say goodbye to him, folks, as Klavier has a decisive witness to call up. The Judge will then call a recess.