That sure was a messed up trial today, but at least Wocky made it out okay... for now. Alita comes in, pleading you to save Wocky, as their marriage takes place in a month. Talk to Alita:

After talking, Alita will leave. Move to the Detention Center.

Wocky is in questioning, but Stickler is free to talk. Talk to Stickler:

Move to the Kitaki Mansion.

Little Plum is out again. You let her know about her bloomers, and the panty-snatcher. Talk to Plum:

Pan right and Examine the trash can where you found the mirror yesterday. The slippers may have some connection to Phoenix's accident. It has a paint stain under it. The Slippers will be added to the Court Record.

Guy is grateful that you have found his noodle stand, but is angered that he can't get it back, as it is a crime scene now. Naturally, he blames Meraktis for this.

Pan left first. An officer won't let you in, unless you could show if there is a connection between here and the crime scene. You have nothing now, so this spot isn't accessible right now.

Pan right and Talk to Guy:

Move to the Detention Center.

Wocky is out of questioning, so you will finally get to Talk to him:

After talking, Present either the Knife or the Pistol. Wocky admits he was there that fateful moment. This will open up a new topic.

Move to the Kitaki Mansion.

A crowd is forming up here. Is it the crime scene? Nope, it's Klavier. He says his exhaust pipe was clogged up yesterday, so his bike wouldn't move. He also notes that Ema isn't too fond of him.

In here you will notice something different. The blue tarps around the stand are gone, why? You then notice Ema, would, as predicted, isn't in a good mood. Ema couldn't get her "new" forensics stuff to work, and she couldn't really stand Klavier. Talk to Ema:

German translation: Zurück is Back and Untersuchen is Examine. 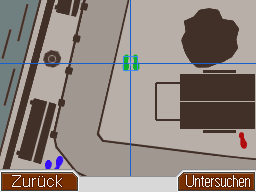 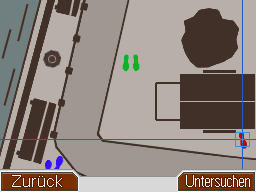 Next, you will dry off the plaster. Use the

to guide a hair dryer all over the plaster. Once it's done, you will need to press ink on the print. Again, use the

to rub the print with a roller until you get a clear view. The print is now planted on a piece of paper and now you can compare to the print to it's owner. In this case, Compare to Wocky Kitaki. It matches! Wocky really was at the scene of the crime!

Present Slippers, Now check a leaf shaped mark on the bottom. Look familiar? Now look closer inside the insoles of the slipper. It looks like a dark toe mark. It looks suspicious. Check the mark and you will get a choice to analyze it or not. Choose Dust for prints. Now do what you did with the Knife yesterday. Sprinkle, blow, and compare. It doesn't look like the print belongs to anybody, so you can't compare it right now. The Slippers will be updated in the Court Record.

Now you have proof that will convince the officer to let you into the clinic. Ema will hand you Detective Skye's Orders, which is added to the Court Record.

You show the orders to the officer, leaving him no choice but to let you in.

Finally, you can Move inside Meraktis Clinic.

It looks like no one is here today. Examine a pile of bowls on the ground. They must be Eldoon's! It looks like they're all clean. It looks like a clue. Examine what looks like a pair of sandals just right of the bowls. What are they doing here? It looks suspicious. The Sandals will be added to the Court Record.

Check the Sandals. Look into the insoles and check what looks like a dark mark. You will check for prints. Do as you did with the Slippers earlier. It doesn't look like it matches anyone. Perhaps you should consult Ema for this. The Sandals are updated in the Court Record.

Examine the slipper rack. There are slippers missing, and it looks like you are holding them! Just what were they doing at the scene of the crime?

Examine the door on the left side of the screen. You hear a thump through it. Is something happening in there? Lucky for you, it's unlocked, so you move inside.

Now, Examine the safe. It looks like someone tried to unlock it. 7 and 9 are already put in. Trucy wonders if you have anything to figure out the rest. Say, I've got just the thing! Present the Fingerprint Powder, as you will have to use your fingers to touch the buttons to open the safe. You will now dust over the numbers and blow them off. Now enter the following numbers in order: 5 and 2.

It opens! There are two notable things to look at. First Examine the piece of paper. Look at the patient's name... Wocky Kitaki! Your client! It is signed by Pal Meraktis... and Nurse Alita Tiala!? Wocky's fiancée!?! Did she used to work here?! It looks like vital evidence! Wocky's Chart will be added to the Court Record.

Examine what looks like a bullet hole in the back. You can still see the bullet, which you pull out. What is it doing here? Was that burglar trying to break in? The Bullet is added to the Court Record.

It looks like you have found everything. Move to People Park.

First, check both the Slippers and the Sandals and get their toeprints. After that, present either the Slippers or the Sandals. You can do this at the reception as well to give it a head start by checking for toe prints early before coming to this place.

But for now however, Move to the Hickfield Clinic.

Phoenix is here. It looks like you are eager to get more information about seven years ago. Talk to Phoenix:

Let's drop the subject for now. Now to what really matters (for now anyway). Move to the Detention Center.

Wocky is here. Talk to him:

Present Wocky's Chart. When you show him the nurse's name, Wocky will admit he met Alita as a patient!

Present the Sandals. Wocky will reveal that it was a present he gave to Alita! The Sandals will be updated to Alita's Sandals in the Court Record.

You are almost finished today. Move to Eldoon's House.

You can now talk to Guy for some advice, and boy is he happy? Present Wocky's Chart to Guy. He will respond by saying that Wocky is "ABD" (All but dead) unless he has an operation after hearing that he is your client. He takes off his bowl hat and offers some advice as a doctor. He looks serious. Talk to Guy:

You then point out something disturbing. Alita Tiala. She knew that Wocky was in serious danger, so why didn't she call for another operation rather than propose a marriage? What was she thinking!?

You can't go into that now. You decide to call it a day.