Enigmar will tell you more about the night of the crime, though he is evasive. Zak does admit that there was an order to shoot in the forehead and he did follow orders and shot the clown. Though he does tell you that when he got to the room, there were two pistols and that he took one of them and hid it in his pocket. He also says that when the gun discharged, Magnifi woke and they started talking. Zak doesn't tell you what he was saying, as it doesn't concern your case.

You are then called back in the courtroom.

Klavier reveals that they took the bullet from the clown's head and found that the bullet does match the type of the weapon. They weren't able to do a direct analysis though, so it isn't conclusive.

Klavier will call in his "decisive witness", none other than the partner of Zak from the Troupe Gramarye, Valant Gramarye! He was there very late at night when the crime occurred. Klavier will present a rather shocking twist. Valant received the almost same letter than Zak got! Magnifi's Letter 2 will be added to the Court Record.

Why would Magnifi ask his two pupils to end his life? Klavier says that Magnifi might have forced them, thanks to their relationship with each other. Valant will finally testify about what he saw.

Valant's Testimony: The Night of the Crime[edit]

Valant's Testimony
- The Night of the Crime -

The Night of the Crime: Cross-Examination[edit]

Press on the 4th statement. Then ask about the number of pistols. There were two pistols, one for each student. Zak fired the pistol and took it with him, so there was one pistol visible. Valant admits he did take the pistol and fired it. When given the choice, say that the statement is Quite important. A new statement is added.

Present the Stage Pistol on this statement. Remember what Zak said? He said he shot the clown. Now Valant is saying the same thing. Recall what Klavier said. The ballistic marking revealed that the bullet from the head and the gun found in the room match, so Valant could have shot him! Klavier then objects, saying he didn't know that there were two pistols, and the markings only confirmed the TYPE of the gun, and those two pistols were the same type!

Valant said that Magnifi was already dead, right? He will testify about his proof.

Valant's Testimony
- Who Shot What -

Time is the subject here, so pressing wrong will get you a penalty. For newcomers, pressing statements 1 and 5 earns you a penalty since there's no contradictions and the evidence that covers the crime. 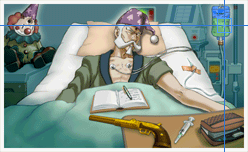 Press on the 4th statement. How was the doctor able to determine the time of death? Klavier says it is because of the IV. The force of the gunshot would probably remove the needle from the patient, so if the IV was removed, it would leave a record. That is how the doctor was able to determine the time. The IV Report will be added to the Court Record. When Valant entered the room, ten minutes had passed since Magnifi's death. When given the choice, say the statement was Very important. A new statement is added.

Press on that statement. Valant noticed the discarded needle as he examined the body. He thanks his "lucky color" that he is not a suspect. He even mentions that he is "wearing" that lucky color right now. When asks if there is something wrong, say There's a contradiction. Valant's statement contradicts with the evidence. When asked for proof, Present the Crime Photo. You will examine the photo. Present the IV bag on the upper-right corner.

The liquid is green, and Valant's dress is yellow. How could green be his lucky color if he isn't wearing it? Klavier will counter the contradiction that the IV liquid is indeed yellow. The bag containing it was light-blue. Let's do the math, if you mix blue with yellow, you get green!

So the liquid is yellow, but you ask Klavier one question, how did Valant know that the liquid was yellow? You are given choices for an explanation, say either that he'd seen it before or he knew the IV liquid's color. Valant has seen it in a colorless bag. What if Valant used the colorless bag to add more IV and change the time of death? When asked how, Present the Small Syringe. He used the needle to add more syringe to the bag, manipulating the time of Magnifi's death!

The wrath of Klavier Gavin[edit]

The Judge seems convinced about your case and is about to call off today's trial, however, Klavier objects. He says you know what you are up to (up to what?) and he isn't willing to give up. Though you can't prove that Valant added IV or not, and Valant wasn't as decisive as he hoped, Klavier would like to present decisive evidence. He shows one more thing, a diary that belonged to Magnifi himself! It chronicles all of the great magician's life, from birth to his recent death. However, it doesn't say anything about the reason for the request they can't refuse.

Magnifi also writes about the night of his death, but it reads:

"...Tonight's IV is in. Maybe the last. I leave the rest to them. The first should come soon. This journal may end here or it may go on... but not long. That depends on his hand. All that is left to mine is to lay down this pen."

Magnifi's Diary will be added to the Court Record. If you Check the diary, you will find that the last page is missing! Klavier also reads: "This journal may end here or it may go on... but not long. That depends on his hand." This "his" is referring to Zak of course. However, the journal didn't go on, so it is possible that Zak indeed killed Magnifi!

You know that is not true! When given a choice, Show evidence. Klavier seems confident on this "decisive evidence" you are about to show. Present the Notebook Page. Look at the diary, it looks like the last page is torn out. It just so happens that you have the last page right here. It fits, and the handwriting matches! It looks like Magnifi finished his page after all, so that means Zak didn't shoot. So who was the one who shot him? Valant, of course! Valant freaks out hearing this.

The downfall of Phoenix Wright[edit]

It looks like you know where this is going. Klavier says the testimony will prove a "deal". The witness is Drew Misham, a painter - and future murder victim if you recall! Klavier asks him about the last page. Drew says he has seen it before. How? Because he made it! If that is so, then it may be that illegal evidence was just presented evidence today! Drew made the forged evidence and you presented it! You deny preparing a fake, but you still presented it.

Drew doesn't know who made him create the forged evidence, but he does know one thing, it's a fake.

It looks like you fell for the ultimate trap and as a result, you have made a fatal mistake. A mistake fatal enough to create a "guilty" verdict for your client. Drew is dismissed from the stand. He asks for your name before he leaves. You answer him and Drew says he won't forget you.

Zak is called up to the stand. The Judge is about to announce a verdict, but Zak stops him. He tells the Judge that it is impossible to announce a "guilty" verdict, not when the client doesn't exist. He then disappears into thin air! The whole court reacts and starts searching for him.

Zak didn't just "escape" from the court, he vanished, along with the case and the "guilty" verdict. No-one has ever seen him since... or did they? Everything in the case is suspended... That is, until seven years later.