Valant appears and warns Apollo that his big illusion will help you with the case. He isn't a witness, so he will be leaving town. Bailiff announces that today's trial will be postponed for half-an-hour. Apparently, The Judge is visiting the hospital, as the Chief of Justice's son's condition has worsened. Bailiff gives you the Newspaper Article, which is added to the Court Record. It says something about "Incuritis". Now, where did you hear that before?

Trial finally begins. The Judge has visited The Chief Justice, as he is going through a difficult time.

So without further ado, let's begin. You are left with two mysteries yesterday. One is that LeTouse was an agent, and the second is that Lamiroir pointed her finger at Daryan as the killer. Klavier says that Daryan has a solid alibi. As the murder occurred, Daryan was rocking it out on stage, so he couldn't have been backstage during the crime. This prompts The Judge to clear Daryan's suspicions and call a verdict to Machi!

You can't let that happen, don't you remember about yesterday? Machi was about to say something about the murder, until Daryan cut you off. You decide to hold the verdict and call up Machi. You need an interpreter, and Klavier doesn't know much about Borginian, so you decide to call up Lamiroir as Machi's translator. Let's hope she doesn't say anything just to protect Machi. Seeing no good reason for refusal, The Judge accepts your request.

Machi will say that, much to even Lamiroir's surprise, has proof of his own innocence! This sounds like vital evidence, probably what he is trying to say yesterday! Machi will testify for his proof.

Of course, Machi doesn't understand English. Klavier, however, asks that if Lamiroir ever told Machi what the lyrics mean. Lamiroir says she has, but not in great detail. Could she be really protecting Machi? It looks like your bracelet will do the job.

Use your bracelet in the 4th statement:

Perceive Machi's eyes. It looks like he is glancing at Lamiroir as soon as she said "English". Does that means Machi does understand English? Lamiroir says that Machi can only say the word "English" and nothing else. So how did he know about the lyrics? Machi says that he read the The Borginian Daily Bugle. You know that's not true, Present the Borginian Newspaper it does say something about the case, but it has no mention of the lyrics at all. Machi then remembers that he was mistaken. He now says that it was Lamiroir that told him about the lyrics! This doesn't look like the type to continue, but you felt your bracelet reacting. You request to add a new statement.

Use your bracelet on that statement:

Perceive Lamiroir's neck. She is swallowing again. How could she not so sure that she told him? Perhaps she could be protecting someone? When asked who, Present Machi Tobaye's Profile. It looks like Lamiroir is lying to protect him. You ask once more to Machi that if he can understand English.

At this point, Machi screams, in English! Machi will finally admit by himself that he can indeed speak English! But only a little bit, as he obviously shows. This is shocking news, even to Lamiroir. Machi will say that he is hiding one last thing, he says he didn't shoot LeTouse. He was at the dressing room, though LeTouse was already lying on the ground. When you and Ema came in, Machi admits that he did escaped through the air vent.

Klavier insists that Machi shot LeTouse, but Machi is pleading otherwise. You then ask Machi about the cocoon. You ask him if he smuggled them in. Machi refuses to tell, according to Lamiroir.

Although seeing little reason to continue, the Judge calls a recess.

Machi insists that he didn't shoot LeTouse. He just went into the dressing room, and found LeTouse's body. Afterwords, he heard gunshots. Gunshots AFTER the body was found? Anyways, the vent he escaped through was connected to the stage and backstage. Machi learned this from the "magician".

Machi refuses to testify about the cocoon. Maybe he is scared about the Borginian death penalty. It looks like you can't get him to talk. Probably calling up someone else would do the trick, even if it hurts.

You call up Lamiroir to the stand. Yesterday, she was assaulted by someone. The assailant wanted her dead, but she escaped. She was taken to the hospital and recovered. Klavier says he didn't get such reports. Why would someone want Lamiroir killed? Maybe they didn't want her to say anything, about the murder no less! Perhaps Lamiroir is hiding something, a "nugget" of truth. Lamiroir is sure that Machi is innocent, and that she heard the voice of the shooter, which belonged to Daryan.

Lamiroir will testify about what she witnessed (or what she heard in this case).

Lamiroir's Testimony
- What I Heard -

Press on the 2nd statement. Then ask, What were they talking about?. Lamiroir says she only heard one phrase correctly! The shooter (probably Daryan) said "It's over. Press the switch! Now!" A switch? That is strange. Maybe you could shed a little light on the subject. A new state is added:

Present the Remote Trigger on this new statement. It looks like this is the "switch" the shooter was mentioning, but how could the killer be telling LeTouse to press a switch? Present the Headset. They probably be using it to talk to someone from backstage, to the stage. Klavier asks how it was able to connect to the players. After all, the communication was only limited to thirty feet. You present the diagram, which shows that the direct distance between the stage and backstage is under thirty feet!

Klavier will now ask you about the "switch" it isn't found at the crime scene, so there's no point to it between the switch and the crime. Klavier asks what the switch triggers, Present the Igniter. You show the court (nearly burning it and The Judge down) that the switch triggers a fire in the igniter! Remember Klavier's burning guitar? This is probably the purpose of the igniter, to burn up such a perfect instrument!

It should be obvious in this state, but Klavier objects again. He reminds you that his guitar burned during the second act, yet the shooting took place in the third, so how is this possible? You say that the shooting might NOT have occurred in the third act. Klavier argues that you and Ema heard the bullets on the third, but you counter by saying that Machi did hear it also, but the killer wasn't seen. 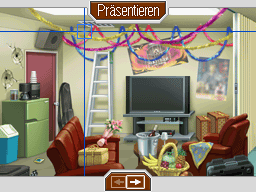 You then conclude that the killer said "Pull the switch! Now!" and the next moment, Klavier's guitar caught in flames. Your conclusion? The shooting took place on the second act, not the third act!

Now you go into a conversation about the killer following the lyrics. It looks like the killer did the shooting before the burning. Why? Probably because it is to interfere with the investigation, fooling everyone into thinking that they had an alibi.

It sounds like it makes sense, but Klavier objects otherwise. He reminds you once more that it was Lamiroir that claims she heard the killer say that, but the window was closed. How could she have heard the voice? Answer that She was somewhere else. When asked where, Present the Air Vent on the diagram. She was up there. It's the only logical explanation. Apparently Lamiroir doesn't know the English word "air vent", thinking that the opening was a window. Lamiroir will admit that she was up there! Why was she up there? Lamiroir says it's hard to say, but she will testify anyways.

Lamiroir's Testimony
- Above the Ceiling -

Bound to secrecy? Lamiroir says she could say why. Maybe she is hiding something. Is she forced to? Is this why there are cross-examinations?

Present the Video Tape on Lamiroir's 4th statement. The reason she is hiding it is because of the illusion. As seen in the video, Lamiroir disappears and reappears at the back of the stage. She would have to go through the air vent to complete the illusion! Klavier knows about it, but he doesn't know all about the details. The Judge, however, points out that it took her twenty seconds to go from the stage to the forum. Lamiroir can't say anything, so it looks like it's up to you.

Two minutes!? Press on the 4th statement. Lamiroir says she had to stop. Why? When given the choice, choose Present evidence, then Present Lamiroir's Brooch. You conclude about the teleportation, the Lamiroir before disappearing and the Lamiroir after, were two different people! Klavier says the former was Valant, disguised as a woman. The real Lamiroir had dropped her brooch between the vents while she was running. It seems amazing that Valant could sing perfectly. Perhaps it was recorded? Klavier says it was live.

A new statement is added.

Press on that statement. She was singing the whole time? Lamiroir says Klavier hates recordings, so she used a microphone.

So if she used a microphone, have the shooter's voice and the gunshots been heard? Maybe LaTouse and the killer didn't notice Lamiroir singing above them, because the speakers drowned her out. Lamiroir then remembers something. When she heard the shots, she stopped singing for a moment. How? Klavier reminds you of the mixing board he gave you the night of the crime. (Remember, when you used it to determine who missed the cue). In the lyrics sheet, Lamiroir was supposed to sing "Pleasure" twice. However, she only sang it once! Because she had heard the shot!

You have now proven that the murder took place in the second act, rather than the third! Now Klavier asks you something. What if Lamiroir was testifying to protect Machi? He likes to call in one last witness, Daryan Crescend as a suspect of murdering LaTouse! The Judge will call a recess.