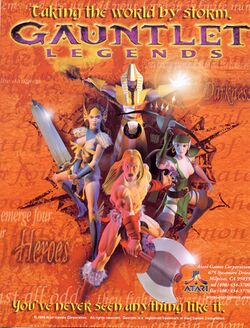 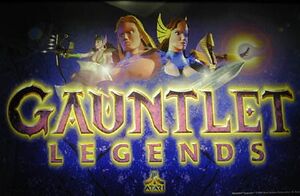 Gauntlet Legends is a three-dimensional action role-playing arcade game that was released by Atari Games in 1998, based on their classic Gauntlet series. It runs on that company's Vegas hardware (an MIPS R5000 that runs at 200 MHz, with an Analog Devices ADSP-2104 that runs at 16 MHz), and the players have a choice between four basic characters of Warrior, Valkyrie, Wizard and Archer (elf), but there are also several bonus characters. The game is divided into five worlds with several levels each and the players' goal is to find obelisks and rune stones which shall restore the power of Sumner (this game's protagonist aside from the players) so he can defeat the evil demon Skorne. The players gain levels by killing enemies, and with every level their statistics improve. The success of the game led to an expansion of sorts, Gauntlet Dark Legacy, in 1999 (the same year this game was converted to the Nintendo 64 console by Midway Games), which featured new characters and worlds as well as those from this game. In 2000, the game was also converted to the Sony PlayStation and Sega Dreamcast.

This is taken from the backs of the ports' boxes, the fronts of which are displayed in the gallery below:

Battle your way through the Gauntlet
realm and become a legend!
Arm yourself and up to 3 friends, for adrenaline-drenched
4-player action in the legendary Gauntlet universe. Destroy evil
forces in the 7 kingdoms! Experience 3 never-before-seen
worlds filled with new enemies, traps and treasures!
Use powerful sorcery, exotic power-ups and new "Items of
Legend" to save the Realm from the Demon Lord Skorne!
Choose from the 4 Classic Characters (and unlock FIVE
hidden characters) to fight hordes of vile enemies and 6 vicious bosses!
Become part of the Gauntlet saga by solving over 20 magical
quests complete with new in-engine cinematics to tell the rich
story line!
Do YOU have what it takes
to become a legend?
© Atari Games 1998