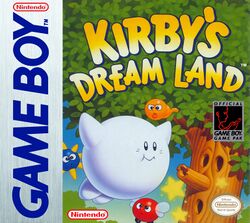 Kirby's Dream Land, known as Hoshi no Kābī (星のカービィ, Hoshi no Kābī? lit. "Kirby of the Stars") in Japan, is a 1992 third party developed platform game developed by HAL Laboratory and published by Nintendo for the Game Boy handheld video game console. It was first released in Japan, and was later released in North America. It is both the first video game in the Kirby series and the debut of the Kirby character. Kirby's Dream Land was designed by Masahiro Sakurai, at HAL Laboratory who intended for Kirby's Dream Land to be a simple game that could be played by beginning gamers. As the inaugural Kirby title, Kirby's Dream Land created many conventions that would appear in later games in the series, including Kirby's basic moves. However, Kirby's trademark "copy" ability would not appear until Kirby's Adventure, released less than one year later. Kirby's Dream Land was re-released for the 3DS's Virtual Console service. It is also one of the games included in Kirby's Dream Collection, on the Wii, which was released to celebrate Kirby's 20th anniversary.