Legacy of the Wizard/Family members 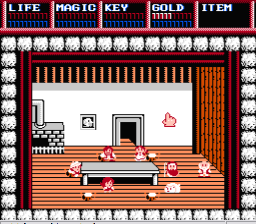 The Worzen family is a tight-knit unit who make their living as woodcutters. The family lives together in their cottage, including the father Xemn and mother Meyna, their son Roas and their daughter Lyll, and Lyll's pet monster Pochi. Additionally, two of Roas and Lyll's grandparents live with them. They are all seen together in their home, which serves as the character select screen. To choose a family member to play with, simply move the pointing cursor to the player you would like to use, and press

. Once you select a family member, you will then appear on the inventory screen. You can walk up to an item that you wish to include in your three equipment spaces, and press

while standing on the item to pack it. Then exit through the bottom of the screen to continue on your way.

Note: The family's name is not the Drasle family, as is commonly misinterpreted by the title. "Drasle" in this case is short for "Dragon Slayer".

Xemn is a powerful man, whose strength was developed over many years of cutting wood. He is the strongest member of the family, with an attack power only equaled by Pochi, but with twice the range as the family pet. However, he is one of the worst jumpers, also comparable to Pochi. Xemn is able to make use of the Powered Boots and the Armor, and only he alone can utilize the block moving Gloves and manipulate the blocks to his will. His domain is the left portion of the dungeon.

Meyna comes from a long line of spell casters, and is able to make use of several magical items that no one else can operate. Her attack magic is not as strong as her husband's ax, but it is more powerful than the childrens'. Meyna has the power to wear Wings which allow her to move anywhere on the screen as easily as walking. She can also use the Key Stick to unlock doors with the power of magic, and the Hit Rod which sends blocks flying away. She is responsible for exploring the lowest depths of the dungeon.

Roas is the child who is destined to complete the work of his ancestor and defeat Keela (or Dilgyos) once and for all. Although Roas' attacks have great range, he is not particular powerful. Even with the aid of the few special items that he is permitted to use, Roas is unable to collect any of the Crowns, not even Pochi's. However, only Roas alone can use the Crowns at the pictures of Princess Celina that are scattered throughout the dungeon to warp to a unique location that no other family member can access. He is also the only one with the ability to wield the Dragon Slayer, the only weapon capable of defeating Keela. Note: In the MSX2 version, the role of Roas is expanded. It is Roas, and not Lyll, who can exclusively reach the shop where the Shield is sold, but only after the family possess two of the crowns.

Although Lyll's character class is described in the game as "Elf", she is human just like the rest of her family. This description is meant to imply that she is proficient in both magic and fighting, though she excels at neither. Like her brother, her attack is weak offensively, but it has incredible range. She is, by far, the best jumper in the game, capable of reaching heights that put other family members to shame. As if her jumping power was not good enough to begin with, she can also strap on the Jump Shoes for an additional boost that helps her to reach items and regions of the dungeon that no one else can. She alone can wield the Mattock, an item capable of breaking blocks at the cost of some magic. She is best used to explore the upper right portion of the dungeon.

Pochi is small, fiesty, and determined. As the loved and cherished family pet, his loyalty extends to them over all his fellow monsters. But when the monsters look at him, all they see is another monster, and not a target to attack. As a result, Pochi can slip in and out of the dungeon without so much as a scratch unless he falls from a great height. Pochi's attack is as powerful as Xemns, but its range is pitifully short. Additionally, Pochi fires very rapidly and will deplete his magic supply much faster than his fellow family members. The only item that Pochi can put to any great use is the Fire Rod, which will extend the range of his attack to make it more effective. Only Pochi can dare approach the well guarded crown near the center of the dungeon.

Roas and Lyll's grandfather is a wonderful listener, and he enjoys listening to the stories of the families adventures. In the game, he is used to recount the passwords that have been given out by grandmother Jiela, and allow the family to continue their adventure from where they previously left off.

The grandmother of the family has an important role of recounting their escapades in a form that they will remember. In the game, she is the one who provides players with a password to write down so that they can continue with their progress when they return to the game later on.

On the wall of the household is a picture of the family member who was first responsible for imprisoning Keela (Dilgyos) in the painting deep inside the dungeon. He knew his spell would not last forever, and so he placed powerful objects in the dungeon for his descendants to find and finish the job that he started. His portrait appears to be nothing more than decoration, but it is known to be the key to certain secrets.