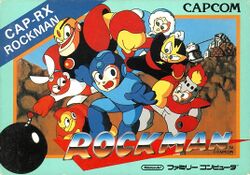 Mega Man, known as Rockman (ロックマン, Rockman?) in Japan, is an action game developed and published by Capcom for the Famicom and NES. It is the first game in the original Mega Man series and the entire Mega Man franchise. It was first released in Japan on December 17, 1987, and was localized for North America and published near simultaneously in December 1987. However, the game was not released in Europe until May 1990.

The plot begins the everlasting struggle between the heroic, humanoid robot Mega Man and the evil scientist Dr. Wily. The game establishes many of the gameplay conventions that would define the original Mega Man series as well as its multiple sub-series. A standard action-platform game, Mega Man features a somewhat non-linear setup whereby the player can choose the order to complete its six initial stages. When each "Robot Master" boss is defeated at the end of a stage, a unique weapon is added to the player's arsenal to be used against enemies. Mega Man was developed by a small team of people, which included significant involvement from artist Keiji Inafune. The game was produced specifically for the home console market, a first for Capcom, who had previously focused on arcade titles.

Mega Man was critically well-received for its overall design and has been noted for its high degree of difficulty. Although it was not a commercial success, the game was followed by an abundance of sequels and spin-offs that are still being released to this day, many of which utilize the same graphical, storyline, and gameplay setups instituted by the original 1987 game.

Mega Man has been re-released several times since its 1987 debut.