You can ride any seahorse by right-clicking on them. Naija will move close to them and finally mount one. Use the right-mouse singing button to control them. They won't stay with you from map to map.

To avoid getting sucked in by various bosses, dash at walls. Naija will hold onto them and won't get swept away by the current.

While binding a rock or other item Naija can switch forms and she will still be attracting the bound item. A rock can used as protection against enemies. Later in the game, when having Nature form, you can add a thorny plant which will damage enemies.

Naija can ride on the backs of certain minibosses. In combination with shield and Urchin Costume it can be quite effective as an attack strategy.

In Naija's house, at the very bottom is a strong current you cannot pass until you have the beast form. Going south and then west will take you to a hidden room resembling the Sun Temple. Some of the found Treasures will be stored here. There is also another room to the southeast.

Li is located in the northeastern part of the Veil. Swim near the surface until you find a man in a blue diver's suit. Follow him closely until he leads you to an underwater cave. Get closer to him when he's cornered and use the bind spell to remove his helmet. Li will follow Naija around but can get stuck in some places and can't swim against currents that beast form can nor swim in narrow passages that fish form can. Singing Li's song will bring Li to Naija. Singing the song again will toggle Li's attack mode. In attack mode, Li fires a single homing shot (blue colored) similarly as energy form but slower and with less frequency.

If you are in song form, get close to Li and Naija and Li will "hug". While hugging, you can move around by singing, similarly as to a seahorse.

In some places (house in Mithalas, cave behind a wolf-fish in the Kelp forest, north-west part of the Abyss, bubble in the frozen veil and a house inside the whale) are little tadpoles. If you don't shoot them and sing (match the song note-color to the leech's eye color), they will cling to your body and permanently regenerate you as long as you are on this map. Also, they will fall off if you switch to Fish form or if you spin, though you can get them to cling to you again.

There are several places in the Veil with secrets in which you have to climb out of the water. It is much easier to navigate via wall jumping with the mouse. You'll find that with the keyboard, it tends to overshoot or lack aim. Also, don't forget to use Nature Form and create platforms with the large vines you can make. If you put the vine directly under you, it will propel you forward. It's kind of sketchy, but with a little practice, can prove useful.

You can sing when there's a Eel swimming near you to make it drop Eel Oil. Just keep singing notes so that it circles around you and after three circles it should drop an Eel Oil. You can get more than one piece of oil this way from a single Eel.

Otters in the Frozen Veil swim about with random food in their hands. They can be made to drop their food by dashing into them twice.

You can get the Divine soup infinite times without the use of ingredients. In Open Waters #1 you must kill small black semisphere creature to get Divine soup. It is extremely durable creature, you'll spend a few minutes. 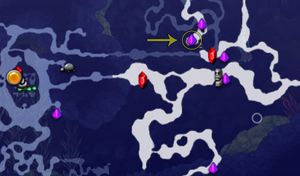