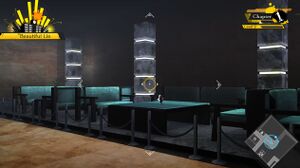 The first Hidden Monokuma of the game can be found on a table in the hall.

After the scene, follow everyone out of the Gym. Follow the path to the gate that leads into the next segment of the hallway, where Hidden Monokuma #1 can be found walking on a table. Walk to the entrance hall and exit the building, then follow the path around the back of the building to find a red door. Use it to enter the Boiler Room, then examine the manhole for a scene.

Now underground, smack the hooks and barrels for some Monocoins, then examine the tunnel to begin a mini-game: Death Road of Despair (絶望デスロード, Zetsubō Desurōdo?, lit. Despair Death Road). This is a platformer in which traps must be avoided. If a trap is activated, then the student at the front of the line will be knocked out and the next student will take over. This continues until all students are knocked out or the ending is reached. While completing the mini-game rewards the player with Monopad Theme #28: Death Road of Despair, 100 Monocoins, and an alternate ending scene, completion isn't expected as it is intentionally difficult.

A scene plays after a couple of failed attempts at Death Road of Despair. Speak to Kaito and Shuichi afterward, then use the ladder to leave. Speak to Gonta in the Boiler Room, and speak to Kirumi, Tsumugi, and Himiko outside the building. Enter Kaede's dorm room and go to sleep to conclude the day. 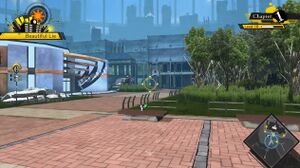 The second Hidden Monokuma can be found on a bench outside.
Bonus Scene

Play the demo or use the MonoMono Machine in the school store to obtain the Nail Brush. This will unlock a bonus scene upon speaking to Tsumugi after exploring the library (the event occurs in the second half of Free Time). This can also be accessed later via Chapter Select.

Enter the School Building (Tsumugi can be spoken to outside and Shuichi can be spoken to in the entrance hall) and walk to the room on the map labeled with a fork and knife, representing the Dining Hall. After the scene, open the door, then exit. Outside, look across the path to find Hidden Monokuma #2 on a bench. Enter the School Building and go down the stairs to find the Library, but before entering, consider preparing for the Bonus Scene (detailed to the right). After the scene in the Library, return to the Dining Hall. Exit after speaking to everyone and return to the Library. After another scene is the game's first Free Time opportunity.

After Free Time, open the door for a scene, then open it again. After the second scene, go to the Dining Hall and speak to Miu. Then go to the Warehouse (a room labeled with a box at the end of the hall). Examine the items on the floor while waiting for Shuichi. After the short scene, go to the Ultimate Inventor Lab, located at the other end of the Courtyard off a path to the side. Two more Free Time opportunities follow. 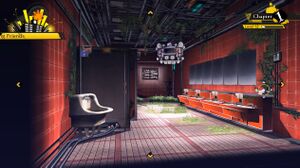 The third Hidden Monokuma can be found in the bathroom. 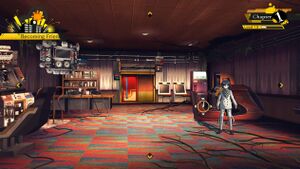 The fourth Hidden Monokuma can be found behind an arcade machine.

The next day, examine Shuichi's door to meet up with him, then go to the Dining Hall. After speaking to everyone, enter Classroom A. Examine the vent near the floor to set the plan in motion. Go to the Library and examine the ladder. After the scene, return to Classroom A. The following scenes lead into the next segment of the chapter.