Any spells in game can be used by any class, you'll just need to have the attributes. In multiplayer, any spell/attack in game can hit your friend.

Apocalypse: looks like an earthquake. It's the most damaging spell in game, but you can only use it as a scroll. The spell damages everyone on your screen. Diablo himself can use this spell.

Blood Star: mostly look like a shining red ball of pure chaos magic. Not that damaging at all and it's very rare to find this spellbook. Succubus witches can use this spell.

Blood spirit: a red spirit "head" that seeks his enemy till it deals damage. Does not inflict too much damage.

Chain Lightning: one of the best spells in game. It inflicts a great amount of damage and can hit more than one enemy at the same time. A spell that sorcerers must have. The spell will be cast on any enemy that is around.

Charged Bolts: one of the first spells in game, more like a lightning ball. It will randomly "walk" on the scenario until it hits something. As you level it up, more balls will be cast.

Elemental: a summoned burning man that will seek an enemy until it deals damage. A great damage-dealer.

Fireball: the name says everything. This ball will explode when it hits something, dealing damage to everyone around. One of the best spells in game and another spell that sorcerers must learn.

Firebolt: it's the spell you'll start with. Basically a bolt of fire. At first levels it may not be that damaging, but after its upgrade, it can become a very useful spell. 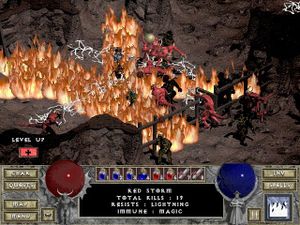 Lightning and Firewall being casted.

Firewall: a wall of fire. Not as good as you might think, but it can help you defend yourself against an horde of monsters or make a nice strategy. Not that damaging at all.

Flame Wave: most like a "walking firewall". Great damage-dealer.

Flash: a lightning aura that hits everyone too close of you. Great damage-dealer.

Golem: basically a summoned Golem that will stay fighting by your side until it dies. Glitch: sometimes, when casting a charged bolt that can hit friends by mistake, your Golem may be hit by you and will turn against you.

Guardian: three dragon-heads that comes from the ground and start firing firebolts on every enemy around until it vanishes.

Heal Other: another healing spell, but now to your friends.

Holy Bolt: Holy Bolt is basically a bolt from Heaven. Very useful at first levels. It's a good damage-dealer on undead minions.

Identify: not a spell indeed, but a scroll containing its essence. Unidentified items will become identified to you after this scroll is used.

Inferno: basically hell! It's more like fire spots on the ground that grow until it vanishes. Very good.

Infravision: scrolls only. Makes every monster become visible to you. It'll stop its influence after some time.

Lightning: devastating as well, but not as much as its cousin Chain Lightning. The difference between them both is that this spell will only cast one lightning wave.

Mana Shield: this is an essential spell for a sorcerer, otherwise the game will get very difficult for them and you surely will die. This spell makes your mana pool become your life pool as well, granting to the sorcerers more life. However, spells yet may consume mana as well. After your mana pool runs out, your life pool will again become your main life, and Mana Shield will disappear. In that case, recover your mana and use the spell again.

Nova: this spell is more like an explosion of high-density magic. You will basically cast out your magic on an explosion that will make a circular aura and hit everyone on the screen. However, this spell can only be cast out from scrolls.

Phasing: more like a teleport spell, it will instantly teleport your character to a visible area of your screen.

Resurrect: your ally comes to life again after death. Available only for multiplayer games. Scrolls only.

Stone Curse: a curse that makes any enemy turn to a stone statue. Helps a lot, but does not inflicts any damage, in fact just paralyses your enemy. Stronger enemies may only get cursed for a little time, and the strongest enemies or bosses may not be cursed.

Telekinesis: a useless spell. Does not inflict any damage, only makes you able to open doors from a far distance, or push your enemies away.

Town Portal: another useful spell. This spell creates a portal that teleports you to Tristram when crossed.