You're in the WRO Headquarters now, your starting point being the ground floor. However, DeepGround isn't going to make this easy for you - there are rocket-launcher armed DeepGround soldiers around on the upper floors. Use your sniper scope and your rifle (or a long-range barrel and your rifle) to take them out first, as their missiles can really pack a punch, especially if you're low on health and you forget that they're around. Concentrate next on assisting the ground floor WRO troops. After clearing the ground floor, go up to the next level, use the mako point nearby if you like and there are a few crates hanging around, crack them open for a few items.

At the second floor, again clear the floor of DeepGround soldiers, and one of them will drop a new accessory for your gun. Collect the card key, pass the laser gate, and when you reach the corner a DG soldier will spawn, so kill him for the cark key. Use the card key, and go up to the 2nd Floor. 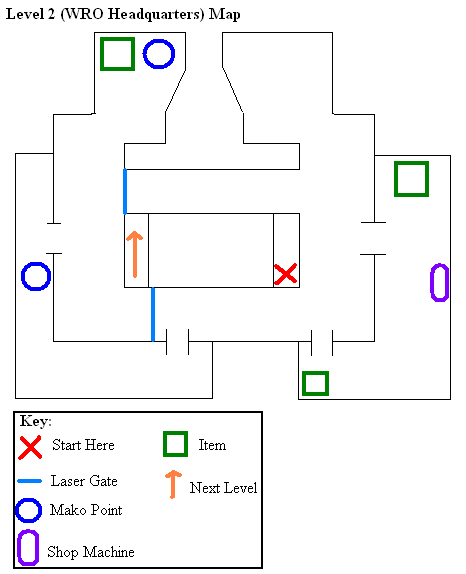 As you come up the stairs to the 2nd floor, defeat the DeepGround soldiers on the bridge. One of these soldiers will have a rocket launcher if you didn't defeat him while on one of the lower levels. You can go into the adjoining room for some items if you want. Since there is no key for either the Laser Gate on the bridge or other other one, just go past the other one via the hallway nearby.

On the 3rd floor, kill all of the enemies to continue your way up. One small thing, if you really want slightly more gil at the end of the level, don't shoot the explosive crate, as it'll kill the WRO soldier in the process (a good way to avoid this is to remove the auto-aiming accessory, as you may auto aim and shoot the barrel by mistake).

On the 4th floor, make your way to the elevator, a soldier will be there, shoot him and he will drop you an accessory. The other soldier is taking the elevator down and it doesn't look like you can join him. So, go back down to the 3rd floor and hijack the elevator to the 4th floor. Go through to the other side that you could not have reached before getting access to the elevator and get to the door. Beware of the guy with the mounted machine gun, you can kill him by shooting the explosive barrel near him (if you haven't shot the barrel beforehand...).

After the cutscene, just follow the passage and don't worry about the timer. The passage holds some enemies, which are generally easy to kill. Your real problem may be with the two rocket launcher armed DeepGround Soldiers who are in the narrow path and are therefore very difficult to kill without sustaining a serious amount of damage. The best way to deal with these two is to shoot them with magic - lots of magic - before they can knock you over and damage you seriously. On the slope up, some explosive barrels will come tumbling down to you - jump over them. Continue until the end of the passage, where you'll get a scene.

When you leave this area of the map, you'll see Azul - so go back down the ground floor and to where Azul was. Continue down the passage, shooting down the DeepGround soldiers as you progress to get a gun enhancer and the all-important Card Key. In the room before the final hall, there's a mako point and a shop machine too.

Enter the final hall, watch the cutscene and get prepared for a boss fight.

The best way to beat Shelke is to use a limit breaker and duke it out with her - you can't match her speed and if you get too close her attacks will bite swift and sharp. If you don't have a limit breaker... The moment the battle starts, get away from her and try and shoot her from afar. Also, use magic. Lots of magic. You will do a lot of running away, and it may seem that you're doing more running away than shooting, but this is necessary for beating Shelke using only your guns (and magic). Note that when she uses her shield (and you're still in Vincent form, rather than the Galian Beast), she will charge for you, which will knock you over and will immediately launch into another attack, so you won't have any time to get back up - best solution to this is dodge, jump, duck and weave to keep out of her way.

After the battle, walk into the hallway to trigger another scene.

This boss is probably a lot easier than Shelke. This is because although Azul has a very high HP and Defence, he is also next to a huge load of highly explosive barrels. So, when the boss battle starts, run to the left or right corner, and shoot barrels as he walks towards you - make sure that the barrels are close enough to damage him when they explode. Keep an eye out for when he raises his gun, as he has a nasty shockwave attack which the only way to avoid is to jump over it. Also, once all the barrels on the ground are used up, rather than waste ammo in shooting him, look up - there is at least one shelf that has about 3 or 4 more barrels on them. Shoot them once to knock them down, and shoot them again when Azul is near to explode them and finish Azul off.

Hurry to the Command Centre![edit]