The Chapter opens up with Vincent in the sewers of the Shinra Mansion, where he soon discovers that he isn't alone. The mission 'Eliminate the Sahagin!' comes up. These enemies are great if you like gil farming - kill off as many as you can (they're very easy to kill, they run right at you, and their weak spot is where the auto-aim tends to aim), then get yourself killed before the next save point. Choose gil over experience and presto - you have a lot of gil. Of course, this will bring your final rank at the end of the chapter down.

Kill the Sahagin in the area you started off in, then go down the hall, collecting items and shooting Sahagin as you go. Also note that some of the side chimney-like bits from the hall contain Sahagin that jump down on you when you try and get the item - it gives you a fright the first time, but they're pretty easy to defeat - they just have the element of surprise.

Beside the laser gate after the hall is a ladder, climb up it to get a mako point and jump back down. Now you are faced with a mage-like Sahagin who throws something at you. Rather than finding out what it is, shoot him - only to find that some more Sahagin minions have come to jump you. Kill them off, an easier way to do this is to back off and let them charge you, and pick them off one at a time. Kill them all to get the Card Key. Continue through the sewers to the south-west area, some of the Sahagin have managed to get their hands on guns and have figured out to use them, but they don't do that much damage. After reaching the south-west area, you just follow your map to the eastern area. After you've gone through the narrow path, you'll see a bunch of Sahagin wandering around, they're conveniently near an explosive barrel, so shoot them before they get you.

Continue onwards, on the left in a canal with a broken gate is a box, but it contains a Sahagin, although upon its demise it does drop an item.

Just continue through the sewer, keep your eyes peeled, there are a load of items in this Chapter for the taking, and if you continue onwards and keep looking to the left you should see a blizzard materia.

A Sahagin you encounter will drop a card key, so go through the laser gate (which should be to your left). There will be a whole load of Sahagin, and after you kill them you can get access to 2500 gold. From there, go across the sewer, up the two ladders, and there are about 3 enemies on top, after getting them out of the way press the switch and open the gate. Go through the gate, explore the next area (go find the rest of the Sahagin to kill if you like), then climb up the ladder that's just past the gate you opened. There's a guard at the top of the ladder, go shoot him.

Above you should be another guard, who you can snipe, then his buddy who will come along and not seem to notice that his companion is dead. On the other side of the elevator are two more guards, and there's a sort of garage-loading bay thing which has a rollerdoor that is half open. Duck to get into there, but be warned that there's an infinite supply of DeepGround soldiers - great if you've got the Lucky-S Barrel when playing on Extra-Hard mode, but not so great in that you can't safely keep safe from them - you'll end up using all your curative goods a short while after picking them off. Also note that this is where a memory capsule is also, but you have to go through a bit of pain to get it.

This floor leaves you on a bridge, run forward to the next room, try to exit the room, the door will slam in your face, try to get out of there and you'll find yourself trapped. Bring on the shooting gallery! Except you don't have a toy gun and the targets shoot back. The wall to the east will open and a bunch of soldiers will come out and fire at you, destroy them all for the west side to open and more soldiers will shoot at you. If you're playing on extra-hard mode, a bunch of DeepGround soldiers will jump down onto the bridge and start shooting at you. Watch the cutscenes and then...

Surprise! You get to play as Cait Sith!

Take a right to see a short cutscene, the aim of this part is to remain unseen (much like Solid Snake... except with Cait!), which is relatively easy to do, as the AI has made the DeepGround soldiers a little mentally challenged. And blind. And deaf. Either way, while the soldiers back is turned, duck behind the box. The next bit is a bit tricky, you have to sneak past him while he comes around, so use the box as a shield. You should come to a drop, do a running jump off've the drop, it doesn't really matter where you land, if you land near the ladder just climb back up. Now you have to get past the 2 guards. The trick to these two is to wait until they turn their backs on you, so you follow the one on the right. When he's at the end of his pathway, jump behind the box and get close to the ladder. There's a cutscene here, and for the time being, so long as you stay where you are you're safe from the eyes of the DeepGround soldiers. Now look down and notice that there's a DeepGround soldier on the prowl. On your left is a series of pipes leading to an explodable barrel. To get past the lower guard you need to jump the pipes while his back is turned. However, don't go too far as there is another guard on the other side of the pipes who wanders back and forth. When the guard has turned away, sneak past him and head towards the barrel to get another cutscene.

There is a sort of timing for this next bit, you may have to watch the guard for a while to get this right. When the timing is right, walk up to the barrel and roll it to the guard, blowing him up (careful to push instead of jump, he'll catch you if you jump).

Move down to the second exploding barrel, push it when the two guards have their backs turned and make a mad dash across. Next you have to climb the boxes, jump behind the 2 guards then clamber into the pipe. In the next area, wait for the guard to pass round the pillar on the right, and make a dash for the left. Jump over the barrel, wait until the guard is in position and push the barrel onto him. Further ahead there are 2 more guards, time your dash so they're both facing away and jump into the pipe on your right.

There are several ways of bringing this boss down, and all of them are pretty equal in terms of best strategy. One way is by using a limit breaker and give far worse than you get - at least you'll save on bullets. Another way you can do this, which is slightly superior in terms of tactics, is to shoot it from afar. Keep a lock on it and strafe around it, all the while shooting it - it's recommended that you use the machine gun or Cerberus with the normal barrel, as while the rifle does superior damage, its reload time is very slow, which is not good when fighting the Black Widow.

Most of this boss' attacks aren't that bad, except for the laser. You can tell that the laser is about to go off by the glow at the tip of the Widows' weapon, so dodge and duck to keep away from it - it can deal some serious damage.

Sometimes the Widow climbs up walls and onto the ceiling, all the while shooting at you - keep shooting it for dear life, as if you knock it down, it'll be on its back and its belly is its major weak spot. It's recommended that specifically for this you change to a rifle with your most powerful barrel - you might not get that many shots in, but every shot you give to it while it's bearing its weak spot is a critical hit. In other words, loads of damage for the Widow. 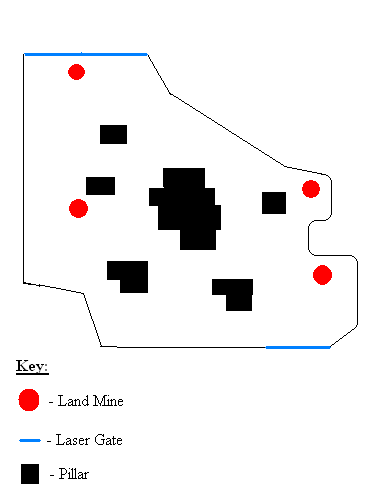