The controls for 3DS can be customized. The default controls are listed below. 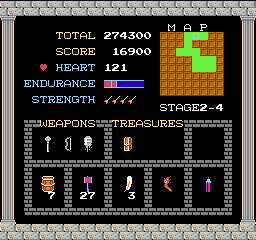 You can obtain a lot of useful information concerning Pit's status at any point in the game by pausing and visiting the subscreen. On the subscreen, you can learn the following info:

Pit begins as a young boy trapped in the underworld. He has been tasked by Palutena, the imprisoned Goddess of Light, to defeat Medusa, the Goddess of Darkness. Already wielding the Three Sacred Treasures (the Pegasus Wings, Mirror Shield, and Light Arrows), Medusa commands an army of terrible power, which threatens Angel Land and Palutena's Palace in the Sky. Gifted with a magical bow, Pit sets out to reclaim the Three Sacred Treasures and restore peace to Angel Land.

Pit is loosely based on Icarus and Eros (also known as Cupid), figures from Greek mythology. The clothes that he wears and the fact that he is an angel resembles Perseus, Bellerophon, and Hercules, the last also being an archer. His character design has changed very little over the years, having always included elements associated with classical antiquity (such as the chiton and sandals). His primary weapon is the bow and arrow.

Pit's vitality is tied directly to his accumulated score. He begins the game with one bar of health in his meter. Extra bars are earned by passing certain point levels when the total score is tabulated at the end of the stage. These bars are earned as follows:

There was once a kingdom called "Angel Land." This kingdom was ruled by two beautiful goddesses, Palutena who administered light and Medusa who ruled darkness. Palutena lived in the Palace in the Sky and administered light so that man could live in happiness. And bathed in this light man grew food and lived in peace. However, Medusa the goddess of darkness was different. Medusa hated mankind. She took great pleasure in drying up the crops that man took great pains to grow and in turning people into stone statues. In her anger Palutena changed Medusa into an ugly monster and banished her to the deep, dark Underworld. For being changed into this ugly monster and forced to live in the Underworld, Medusa promised to take over the Palace in the Sky where Palutena lived. So great was Medusa's anger that she joined forces with the monsters and evil spirits of the Underworld and Medusa's army soon began to surpass Palutena's army in strength.

Soon a war between Palutena and Medusa began. Medusa led a surprise attack on Palutena's army which could barely fend off the attack. Palutena's army suffered major losses and was heavily defeated in the final battle. What's more, Medusa's army took Paletuna's source of power the Three Sacred Treasures - the Mirror Shield, the Arrow of Light, and the Wings of Pegasus - away from her. Almost all of the warriors in Palutena's army were turned into stone statues and Palutena herself was imprisoned deep in the Palace in the Sky. The peaceful realm of Angel Land came to be inhabited by foul and terrible monsters and was turned into a land of darkness ruled by the wicked Medusa. Locked in the depths of the Palace in the Sky, Palutena's strength was drained to its last. As a last resort, she sought the help of the angel youth Pit who was being held prisoner locked in a deep dungeon in the Underworld.

The Centurions are the royal guards of Palutena. During the battle for Angel Land, they were turned to stone by Medusa. They were then placed around fortresses by Medusa as decorations. When Pit stumbles upon a statue, he can crack them open with mallets and rescue the Centurion inside. They will come and aid you in battle against the fortress boss. However, they can only withstand one hit before they are defeated.