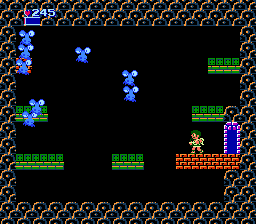 Specknose nests are among the most common rooms that you will encounter throughout your journey in Angel Land. They are simply abandoned treasure rooms where a group of eight Specknoses have taken up residence. When they first appear, the Specknose's motion can be a bit erratic and hard to predict, but they eventually settle into a pattern. They are easily defeated with one arrow, and leave behind a precious large heart. If you are brave enough to remain inside until the Specknoses are defeated, you can rack up 80 hearts to add to your bank account. 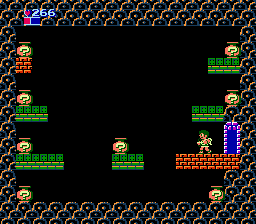 Treasure Rooms can be a source of rare items or agony. They are only found in the first and second worlds of Angel Land. Eight treasure pots are assembled around the room. In one of them lies the God of Poverty. If you manage to shoot all of the pots except for the one in which the poverty god waits, the final pot will reveal a precious item; an Angel Feather, a Bottle of Life, a Barrel, or a Credit Card. Collecting the contents of a pot will make all the remaining pots disappear. If you shoot the God of Poverty's pot too soon, you will lose claim to any of the contents that you have already revealed and you will be kicked out of the room. This is the only method through which you can obtain a Credit Card, and the only other way to obtain a Barrel besides paying 500 hearts to the black market. Shooting each treasure pot costs five hearts, so you must have at least 40 hearts when you enter or you will not be able to shoot them all. There is a trick to revealing which pot the God of Poverty lies in. Click on the spoiler below to figure out where he is hiding.

Beat the God of Poverty
There is a method that you can use to figure out what pot the God of Poverty is hidden inside, and therefore, which pot you should wait to shoot last. In each world, there are three pots that you can safely shoot and reveal the contents of. The number of mallets that result from those pots will indicate which pot should be shot last. Shoot the pots indicated in the images below, and consult the following tables to determine the correct pot to save. 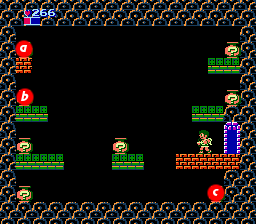 For the first world, shoot the three indicated pots. 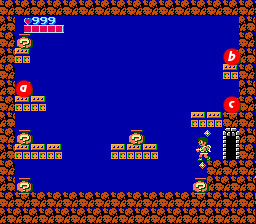 For the second world, shoot the three indicated pots. 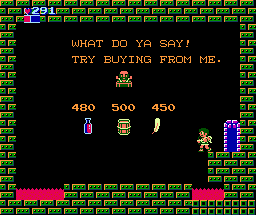 The Black Market is a place of desperate deals. The price you pay on the items here are a huge markup on what you might normally pay elsewhere. It is the only place other than a treasure room where you can obtain a barrel. If you have encountered the Plutons and they managed to steal an enchanted weapon off of Pit, you will be able to buy them back at ridiculously expensive prices. You might just be better off earning them over again. However, there's one thing you can do at a Black Market that you can't do at a shop: Buy with credit. If you manage to obtain a Credit Card from a treasure room, you will be able to purchase items that you don't have enough hearts for. After you do that, every heart you collect will go towards paying off the debt until the balance is zero. 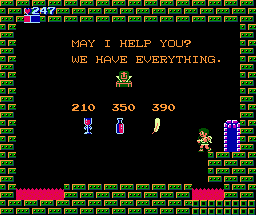 At shops, you can purchase Cups of Life, Bottles of Life, Angel Feathers, and Mallets. In the fortresses you may even be able to purchase mapping equipment from the shops.

. (Note: On the Famicom, all that was necessary was to speak into the second controller's microphone.) To haggle on the 3D Classics version, press

If Pit's level of offensive strength is higher than the current stage (first number), the shop keeper will lower the prices. If it is not, he will raise the prices. For example, if you are attempting to haggle with the Shop Keeper in the Overworld, you need to have three arrows or more to successfully lower the prices. If you are hoping to purchase an item, and the shop is not offering that items for sale, you can purchase a cheap mallet and wait for the shop to reset to see if the item you want appears. 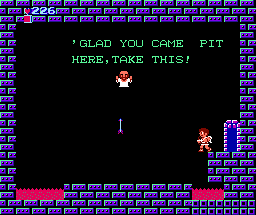 Certain rooms may be empty or contain a god, depending on Pit's performance prior to arriving in the room. If Pit has destroyed a large number of enemies, then a god such a Zeus will be waiting for him in the room to reward his bravery by presenting him with an additional arrow of power. Pit starts with only one, but can be awarded up to four additional arrows, at which point he will be at full strength. If Pit has not demonstrated enough bravery by the time he reaches a room such as this, it will be empty upon his arrival, and he will receive no reward. If you wish to be rewarded by the gods, always fight to the last before moving on to the next area. Things that impress the gods are collecting hearts when your total is below 999 hearts, killing enemies, and earning enchanted weapons. Things that lower the gods impression of you are how often you fire your arrows, taking damage from enemies, and breaking pots in the treasure chambers. For the reason mentioned above, you should avoid having 999 hearts as much as possible until you reach the fifth arrow, since you will be missing opportunities to impress the gods otherwise. 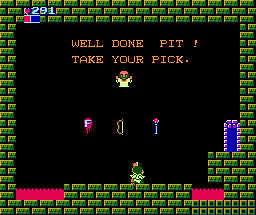 The testing grounds are another room where Pit will encounter a god. Pit will be asked to endure harsh training, at which point, hundreds of monoliths will appear out of thin air and fly all over the room. A majority of them will go nowhere near Pit, but so many appear that he is bound to be hit by quite a few of them. He must react quickly, shooting them out of the air, jumping over them, or ducking under them in order to avoid getting struck by them. Don't be tempted by the small hearts they leave behind either, as they are likely to lure Pit into an unsafe location. Should Pit manage to survive the onslaught of the monoliths and not leave the room before the end, the gods will reward Pit by granting him his selection of one of the three enchanted weapons; the Crystal Rod, the Flame Arrow, or the Sacred Bow. There is no other available method to obtain these items (unless they have been stolen from you by a Pluton or Plutonfly, in which case you can purchase them back from the Black Market). 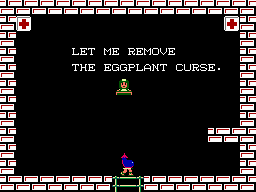 Hospitals are only found in the three fortresses of Angel Land. This is because it is only in these fortresses that you can be struck by the Eggplant Wizard's evil eggplant curse. If you are struck by the Eggplant Wizard's flying eggplant, Pit's body will transform into that of an eggplant, and he will be unable to use his bow. The only remedy to this curse is to locate a hospital room and visit it so that the nurse inside can remove the curse. Knowledge of the nearest hospital's whereabouts are vital to avoid walking around in a highly vulnerable state for too long. 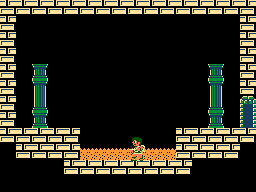 The golden waters of the Hot Spring can restore all of Pit's lost health. Merely standing in the water is enough for all of Pit's health to regenerate to its maximum possible amount. The first Spring that Pit will encounter is found in the first fortress. After that, it is not uncommon to find them during your travels throughout later stages as well. Always take advantage of them whenever you find them. Try to learn the quickest route from a Hot Spring to the fortress boss so that you maintain a high level of health by the time you enter into battle for one of the sacred treasures.