The following enemies can be found through all of Angel Land, and are not isolated to one particular world.

The boss of the first fortress is the two-headed beast known as Twinbellows. He happens to be remarkably similar to the three headed dog Cerberus, who guards the entrance to Hades in Greek mythology. Twinbellows, instead, guards the first sacred treasure chest. Both heads are capable of breathing fire, while his body is able to leap high into the air. He tends to leap off the ground when he is struck by an arrow, and you can use this to your advantage. If you strike him while he is standing still, he will hop into the air, and come back down in the same location. If you hit him quickly enough, he will repeat this behavior, and you can essentially keep Twinbellows in one place while you finish him off.

The boss of the second fortress is the serpentine beast known as Hewdraw. Hewdraw calls the lava in his room home, but it's clear very dangerous for Pit to set foot in it. Instead, he must attempt to maintain his footing on the platforms that float above the lava. Meanwhile, Hewdraw reacts to the presence of an intruder in his room by leaping out of the water and crashing back down. He repeats this motion constantly, trying to crash into Pit, and possibly knock him off a ledge and into the lava. Pit must defeat him in order to reclaim the second sacred treasure chest. Only shots to his head can cause him any damage. Centurions can be helpful in your battle against this giant snake, so rescue as many as you can.

The boss of the third fortress is the bubble-like face known as Pandora. Pandora floats freely about her room, wafting slowly from one side to the other. She can render herself invisible from time to time, but she is still vulnerable to Pit's arrows. While her touch is deadly, she moves slowly enough to be avoided easily. What's more dangerous are the two companion bubbles that float around the room at a faster speed than Pandora. These bubbles cannot be attacked and must be avoided. They also serve as a big threat to any Centurion soldiers that you have rescued and come to your aid during the fight with Pandora. Pandora has a large number of hit points, the same as Hewdraw, so you must attack her with persistence. 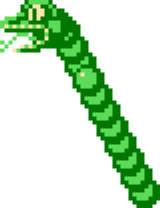 The Goddess of Darkness has used her powers to project a giant version of herself in front of the inner chamber of the Sky Palace in a last ditch effort to prevent Pit from gaining access to Palutena and rescuing her from imprisonment. This larger-than-life Medusa has all of the powers of regular Medusa, including hair made of snakes and stone vision. Pit's Mirror Shield does protect him from turning into stone, but Medusa's eye beams can still harm Pit. Meanwhile, Medusa will send forth individual snakes to attack Pit in the form of large serpents known as Tanatos, a name typically associated with Death. It will take just over 30 shots of the Light Arrow to Medusa's eye (if Pit is at full strength) to defeat Medusa and rob her of her dominance over the Goddess of Light. But you'll have to survive her onslaught in the process.