Ogre Battle: The March of the Black Queen/Deneb's Garden 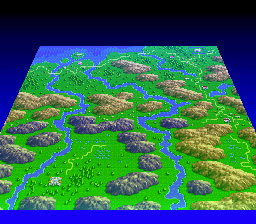 City of Talka: Deneb lives in Valparine castle on the other side of those mountains. Deneb is beautiful beyond belief, but behind that face she's as cold as stone. How does the saying go? "Beautiful reses have thorns", was it?

City of Baljib: Deneb seems to have stopped her experiments on humans. But now she goes out destroying crops! What could she be doing?

City of Peltmont: There have been a lot of strange monsters in the mountains lately. A lot of people say that they have seen men with pumpkins instead of heads!

Trade city of Roseanhels: Have you heard about Deneb? She is a beautiful young witch. They say that Valparine castle is full of men who are bewitched by that beauty. But she is as smart as she is beautiful, and she is researching a new kind of magic.

Roshian temple (North): I guess you will be taking on Deneb, soon. Please remember that as bad as she may be, a life should not be easily taken.

Hidden city of Anquard: Deneb wasn't always a crony of the Empire. Why did she join them? The Empire promised her access to all of the books of magic they had if she would help them... And you know how important research is to Deneb.

Deneb (city of Valparin): So you made it all the way here? Pretty good. Hey, EUROPA, you are not so bad looking yourself. But I am sure that you have an ugly personality. I can tell. Even if I do not look like it, I am avery respectable witch. Actually, I am researching a new spell just now. But I will not share it with you. It is all for me! Heh, heh. Jealous, are you not? Go ahead and pout, but be careful: it causes wrinkles!

Deneb (after battle): I am sorrrrry! I really am! It is all my fault, I know. Will you forgive me? Pleeeease? (heart)

City of Talka: I heard that you forgave Deneb. How could you? She has seduced you with her looks, has she not? Unbelievable...

Trade city of Roseanhel: Across the lake is Castle Zenobia, the center of the kingdom of Zenobia. In Castle Zenobia is the REAL Imperial Army, the Highland Forces. Be careful!

City of Baljib: How could you let Deneb off like that? You have no idea the kinds of things she has done... No idea how much we have suffered because of her. I am not saying that we ahould judge people, but still there is a limit...

City of Peltmont, Roshian temple: Sometimes I cannot stand people. Why do we say one thing to men and another to women?

Hidden city of Anquard: Anquard used to be a fort in the time of king Zenobia. Would you like to know about the tactics used then?

Deneb (city of Valparin): Oh! I have been hoping you would drop by (heart) I have got a favour to ask. Will you help me?