Ogre Battle: The March of the Black Queen/Pogrom Forest

Note that, because of persepctive effect, a triangular portion of each map is superimposed to the other one. 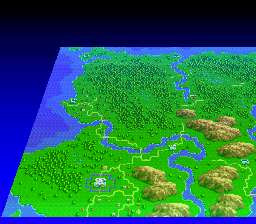 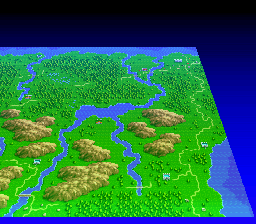 Trade city of Lolaima: I have heard that the Pogrom Forest is full of ghosts. How scary!

City of Rhodnia: Undead characters such as skeletons and ghosts... must be put to rest with a healing spell or other white magic. Set your tactics to anything besides strong. Clerics and others will then attack the undead. You can also fight them if you have white magic weapons!

Roshian temple (E): The forest in this area is a very frightening place called the Pogrom Forest... Oh, I cannot bear to speak any further of it.

Roshian temple (W): I have lived in the Pogrom Forest for twenty years, hoping to save even a few lost souls... I have done my best, but as long as Kapella i here there is nothing I can do.

Roshian temple (S): I recently saw a man in the forest. It looked like he was casting a spell. He drew a shape on the ground and called a demon up out of it! I will bet that was Kapella himself! Oh, how scary!

City of Melanion: I hear that the bodies of those who were massacred still lie in the forest. Last year, several people went into the forest to try to bury them, but they never came out. I guess that thos who could not rest are still wandering the forest, lonely and in pain. They probably want to be friends with those who are still alive. It is almost too much to bear.

City of Acre: I remember the night twenty-five years ago, when Castle Zenobia fell to the Empire's forces. The few survivors of the battle ran into the forest, pursued by the Empire. They knew that they could not fight any more, and were prepared to surrender. But the disgusting Imperial Army ignored their surrender and set the forest on fire. The entire forest went up in flames, and in one night was leveled... along with the people in it. Ever since then, this place has been called the Pogrom Forest.

Hidden city of Para: The ruler of the Pogrom Forest, Kapella, spent several years studying under the mage Rashidi. Rashidi apparently had three students, and Kapella was one. They say that Kapella is taking the souls in the forest and using them to make deals with demons.

City of Alagoyas: To defeat undead monsters, use this white magic staff.

Kapella (city of Goyas): So you have made it through the Pogrom Forest. Well, well... However, you will get no further, because I will stop you! I will send you to the underworld with the powers given to me by the great mage Rashidi!

Roshian temple (E): You will occasionally meet ghosts in the Pogrom Forest. I ran away scared when I saw one, but if you can befriend one, they will join you.

Cities of Lolaima, Alagoyas, Roshian temples: Kapella is gone, but there are still evil spirits in the forest. I will bet there is still somebody somewhere on the continent playing with people's souls!

City of Rhodnia: There are many reasons why one may risk his life in battle. For people, for fame, for ambition, for evil, for freedom... Why are you fighting? You must know the answer to that. And what it means to fight. Why do people fight? Why must people fight? Take your time and think hard about it.

City of Melanion: Have you heard of the "Stone of Dragos"? No? I hear that it lets you become a dragoner, and have control over dragons! I have also heard that if you can become a dragoner you can call dragons to you.

City of Acre: Do you know who it was that massacred those in the forest? No? His name is baron Apros. He used to be a noble of Zenobia, but ever since king Gran's death, he jumped immediately in with the Empire. I am sure that he is still alive and walking smugly around the Empire somewhere.

City of Vyer: It happened last night. It was a full moon, and not a cloud in the sky. I was walking down the road, when all of a sudden it got dark. I looked up, and I saw an island floating in the sky! I could not believe it! Huh? I can tell you do not believe me. Well, fine. Be that way!

City of Goyas: There are now even fewer people who call you the Rebels. Please continue to gain the people's trust as the Liberators!

Boltorano (hidden city of Para): I have a favor to ask of the Liberators. Far to the west in the Dalmud Desert is a town called Aliabard. I want you to ring me a certain stone from the magician Gizolfy. Will you do this for me? Yes? Thank you very much. Please take this "quicksilver" [mercury]. Give this to Gizolfy. It will serve to identify you. Thank you for your help!