Ogre Battle: The March of the Black Queen/Sharom District 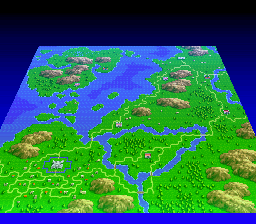 City of Vannu: Gilbert, the ruler of Sharom, used to be a very kind man. But when king Gran was assassinated and the Empire came... he somehow changed. Now he is as cold as ice.

Trade city of Latingurue: How could a wonderful warrior like Gilbert sell out to the Empire? It seems there was a warrior called the Wind Rider in the army led by Gilbert. His name is Canopus. I wonder if he would know something about what happened?

Roshian temple (NW): Welcome to our temple. I think you may have noticed, but it costs three times the deployment cost of a character to revive him. For some characters, it may be cheaper just to recruit a new character. Life is precious, but you have to watch your pocketbook... Oh! As a man of the gods, I cannot believe I just said that!

Canopus (city of Bah'Wahl): So you are that group of barbarian, the "Rebel Forces", huh? Just what do you think you are fighting for?

Anyway, I have given up fighting. Whether the continent is ruled by the Empire or the Rebels is no concern of mine.

Roshian temple (E): Welcome to our temple. You will probably come across thieves and other villains in your travels. It is up to you to decide if you should go along with their schemes, but... please remember that the eyes of the people of Zenobia are upon you.

City of Sagebard: Some characters will fight in different ways, depending on their formation. Be sure to check out how each character fights before choosing a position for them.

Hidden city of Lenikan: Gilbert seems worried as to whether the Rebels are really strong enough to defeat the Empire. I am sure he is watching you closely. He has not really become a pawn of the Empire. He is just afraid that the people of Sharom will be hurt if he helps you. Put yourself in his position, and try to help him if you can.

City of Chang'Gal: Ah! The Rebels! Are you having money problems? I know! I will give you this "Moon Rose"! I am sure that you can find someone who will pay you well for it.

City of Latingurue (2): It seems Canopus had a sister. Her name was Yulia, I think... Maybe Yulia would know why Canopus has given up fighting...

City of Chang'Gal (2): There is an old temple to the west of Parcival, the Empire's base here. A really cute girl lives there, too! What was her name? Yulia, maybe?

Yulia (hidden Roshian temple): I am Yulia, sister of Canopus. Gilbert and my brother were best of friends when they were young. But when the Empire came, my brother wanted to fight to the end, and Gilbert wanted only to protect his people. They quarreled, and have not spoken since. I am sure that you are now strong enough to easily defeat Gilbert. Actually, that is what Gilbert wants. He is a very proud warrior. He cannot forgive himself for giving in to the Empire and throwing away all he believed in. My brother knows that, but he cannot bring himself to forgive Gilbert. Please, will you help me to save these two? Yes! Thank you. Please take this "Wing of Victory". This was given to them by king Gran. If you show this to my brother, it should reawaken his pride. Please give my brother a chance to save Gilbert!

Canopus (city of Bah'Wahl, 2): The Wing of Victory... So you have met my sister. Gilbert and I were very close. We swore to be friends until death, but he threw away his beliefs in the face of the Empire, and joined them to save his people. No, I don't blame him. I understand how he feels so well that it hurts. I cannot allow Gilbert to be killed. He saved my life, once. I must stop him. It is my turn to save his life. Please! Let me join the Rebellion! Yes! Thank you. I swear to fight with you for as long as I live!

Gilbert (city of Parcival): Why must you rebel against the Empire? I understand why you hate them. I feel the same. However, I must protect my people and the peace of Sharom. If you insist on destroying that peace, I must stop you!

Gilbert (after the battle): I had thought that to stop fighting the Empire was the best thing for my land. However, I now see that a false peace is not peace at all: it is just a lie. Canopus: Wait, everyone! Gilbert did not bow to the Empire because he wanted to! Please understand his side of the story! Gilbert: You will forgive me?... Thank you! I pledge my life to you, Destin!

City of Vannu: Have you heard about the Five Heroes who unified the continent? If you ask the witch Babaloa I am sure she will tell you about it. She lives in Annatoria [Lenikan]. Huh? Annatoria? That is the city in that forest to the south of us.

Trade city of Latingur: Ah! The Rebels! Are you having money problems?

City of Chang'Gal: The center of the Zenobian Empire is the Northern Highlands. The imperial army is led by the empress Endora's eldest son, the black knight Gares. There are also four Devas, and the Overlord who protects Endora.

Babaloa (hidden city of Lenikan): I am the great witch Babaloa! Did you come here to see me? What did you want to ask me about?

Roshian temple (East): Welcome to our temple. One of the basics of fighting is hit-and-run. If you feel you are in danger, do not hesitate to run!

City of Sagebard: You will usually want to raise most of your characters from level 1. Not only they will be cheaper that way, but their statistics will climb higher.

City of Bah'Wahl: King Gran had two sons, prince Jan and prince Tristan. Unfortunately, they were both killed in the war twenty-five years ago.

City of Parcival: We thank the Rebels for chasing out the Empire's forces. However, there are some who are not entirely happy with you. Those who live by the sword die by the sword. You cannot win people over with force.

Hidden Roshian temple: Welcome to our temple. We thank the Rebels for chasing out the Empire's forces. The people of Zeteginea are relying on the rebellion. Good luck.