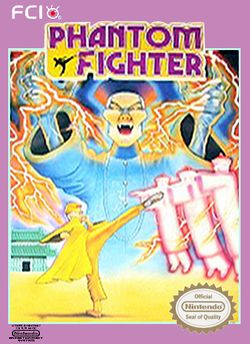 Phantom Fighter, known in Japan as Reigen Doushi (霊幻道士, Reigen Doushi?), is an action game developed for the Famicom by Marionette, and published in Japan by Pony Canyon in 1988. It was later published in the US for the NES by FCI in April 1990.

As a kung-fu master, the player must fight through eight towns filled with undead creatures known as Kyonshi in Japan (or Jiangshi in China), each with a unique town boss. A small selection of items, and a large number of fighting moves could be used on the enemy. The game also included a hidden character that made the game much more difficult, a baby kyonshi or "Conshi." An infinite amount of continues are available to complete the game.

The Japanese version is based on the 1985 film, "Mr. Vampire" ("Reigen Dōshi" being the Japanese title of the film). The vampire of the film is based on the jiangshi, the hopping corpses of Chinese folklore. The main character, Mr. Kau, is a Taoist priest who performs magic that maintains control over spirits and irrepressible vampires. Together with his inept students, Man Choi and Chau-Sang, he resides in a large house protected from the spiritual world with talismans and amulets. The film was the breakthrough success of the jiangshi genre, a trend popular in Hong Kong during the 1980s, and established many of the genre's recognisable tropes.