The day will begin with a conversation between Mia (your boss) and Larry (your friend and client). You will run through the facts of the case as far as he is aware of:

At this point, that is all you really know; you can check the Court Record at any time to view evidence and information about the case. Currently, all you have in the Court Record is your Attorney’s Badge and Cindy's Autopsy Report. The Autopsy Report says that the victim died on 7/31 between 4:00 PM and 5:00 PM from blood loss due to a blunt force trauma.

The trial begins with the judge expressing concern about how nervous you look, and deciding to ask a few questions to establish whether you are capable of defending your client. You must answer these correctly or the judge and Mia will become very annoyed with you. You won't get penalized here if you do choose the wrong choice though.

Once the judge is happy that you are capable, the proceedings will continue. Prosecutor Payne will submit the murder weapon - a statue of "The Thinker". The Statue will now be added to the Court Record and you can view it at any time.

In terms of viewing it, on the WiiWare, to check the Court Record, press

to see the available evidence. On the DS/3DS Trilogy, it's

Payne will try to get Larry worked up (which isn’t hard). He asks him what he thinks of Cindy now that he is aware that she was cheating on him. Here you will get the option to stop him from answering or let him speak. It doesn't really matter which you choose, as Larry will say whatever he wants to anyway.

He will then ask if Larry was at the victim's apartment that day. You will be given the choice whether to let Larry answer honestly or to stop him from answering. Again, it won't really matter which you choose, as Payne has a witness that proves Larry was at Cindy's apartment on the day of the murder.

With witness Frank Sahwit on the stand, it's time for your first witness testimony. You have to point out the contradictions in his testimony. See Gameplay for more information on how to press and present during Courtroom mode.

Right after the testimony, the judge will ask why the phone in the apartment wasn't working. Payne informs the court that there was a blackout in the building, which caused Cindy's cordless phone to stop working. He presents the Blackout Record, and it is added to the Court Record. If you check the Blackout Record, it states that the electricity was out from 12:00 PM until 6:00 PM on the day of the murder.

Now it is time to cross-examine. You can press every statement without getting any penalties, but your objective is to find the lie in his testimony and prove it by presenting evidence from the Court Record. If you press Sahwit's 9th statement, Mia will tell you that this is suspicious. Check the Autopsy Report in the Court Record. Notice anything contradictory? The victim died between 4:00 PM and 5:00 PM, however, the witness is saying he found the body at 1:00 PM.

Present Cindy's Autopsy Report on the 9th statement, or the time when he talks about the time of discovery. Congratulations, you found your first contradiction! The witness will now have to revise his testimony and try to explain why he was so certain it was 1:00 PM.

Wii Remote Controls on WiiWare version: If you miss the control page, not to worry.

is to press the statement.

is to present evidence.

again to show that evidence on that statement.

However, you can use the motion controls which requires moving the

in a specific direction. Shake the

to press the statement and do the "Objection!" pose like Phoenix Wright by (using a clock for example) holding at a 9 o'clock angle and swing quarter clockwise to 12 o'clock while the

is face down with the buttons on top when you present evidence. But you need to go to the Court Record first by

, then choosing the evidence before the "Objection!" gesture. This is optional and it can be turned off by

in the options menu anytime.

to present evidence. After choosing the evidence,

to show the evidence on that statement. This will help you memorize the controls much easier.

Sahwit's Testimony
- The Time of Discovery -

The Time of Discovery: Cross-examination[edit]

In this revised testimony, you can press his second statement, to which Mia will step in and say that it sounds fishy. Why? The answer lies in a piece of evidence that Payne presented at the beginning of the trial. Present the Blackout Record against any of Sahwit's statements but the last statement about being sorry. The television could not have been on, due to the blackout that affected the victim's apartment.

Sahwit will testify once more to try and back out of his lies.

You have to figure out which statement is wrong by yourself this time, but it is pretty obvious. He is now saying that the murder weapon is a clock, but you already know what it is. Present the Statue to the court against statements 2, 3 or 4. The weapon is the Statue of "The Thinker", yet Sahwit is sure that it is a clock. Payne will soon confirm this to be the case, as simply tilting the neck on it cause it to say the current time aloud, revealing how the witness heard the time that day. The Statue will be updated in the Court Record.

At this point, the judge will ask you if you have any problems with the witness' testimony. There is one problem indeed - the question of how Sahwit actually knew the murder weapon was a clock and not a statue, as initially believed. The answer is quite obvious, so choose "Yes" to the judge's question. Phoenix explains that for Sahwit to know it was a clock, he would have needed to hold it in his hands to realize that fact, yet he claimed he never entered the apartment. The only solution to the problem of how he knew that, when asked, is that he "Went into the apartment." Sahwit must have entered the apartment on the day of the murder, and therefore he is the real murderer, not Larry. He knew the time because he hit the victim with the clock, and when he did so, it said the time out loud, making him believe it was 1:00 PM.

The witness gets very angry because he can't talk his way out of it, before throwing his toupée at you. It seems he's defeated, but it's not the case, as the judge suddenly wants to see some proof of these claims. You will be faced with three options. Choose "Try sounding the clock."

The clock will now say "I think the time is 8:25," but the time in the courtroom is actually 11:25. Remember, there was a three-hour gap between the time Sahwit claimed to have found the body, and the time of death on the Autopsy Report.

You almost have him now, since you know he must have been in the apartment on the day of the murder. However, Sahwit states that you can’t prove the clock was three hours slow on the day of the murder, and the judge agrees to that, stating his intention of letting him go if no proof is shown. Mia isn't willing to give up just yet, and advises you think "out of the box" - don't try to figure out when the clock was slow, but why it was slow to begin with. When she asks if you can prove it, choose Yes.

The question to solving this is why Cindy would need a clock that didn't display the correct time. The answer maybe that it was set to the correct time. Remember earlier in the trial that Cindy had recently come back from Paris before her murder? She must have taken the clock with her and had it set to show the correct time in that time zone. Present Cindy’s Passport to the court. The number of hours between the courtroom and Paris is nine hours. This proves that the clock wasn't really three hours slow, but actually nine hours fast, now and on the day of the murder.

Sit back and watch as you win the first case! 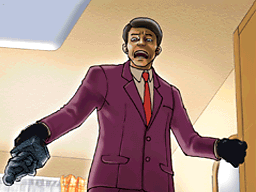 Frank Sahwit was actually a common thief disguised as a newspaper salesman. On the day of the murder, Sahwit was looking for somewhere to rob, and upon seeing Larry leaving Cindy's apartment, broke in and found it deserted. he thus decided to burglarize the place, believing he could make a clean break of it. Unfortunately, he was unaware that Cindy was on her way back, and the moment she entered her apartment, she witnessed him in the act of robbing her.

Panicking upon being caught and seeking to avoid being exposed as a thief, Sahwit grabbed "The Thinker" and struck her with it quickly, killing her instantly. The blow he dealt activated the clock, causing him to hear it say 1:00. Having no idea that Cindy hadn't changed it back to the correct time after her vacation in Paris, Sahwit was fooled into thinking it was the "true" time. Knowing he would be the main suspect in her murder, Sahwit decided to pin the blame on Larry, knowing he had been the only one in the apartment before he left, and thus had no alibi for the time of the crime. Just then, the power went out, forcing him to look for a phone to call the police.

Upon being taken in for questioning, Sahwit implicated Larry for Cindy's murder. Unfortunately, his plan was undone by two simple mistakes - the first being his knowledge of what the murder weapon was, and the second being the time that he stated during his testimony - both of which effectively exposed him as the real culprit.

Though Larry is found Not Guilty, he looks terribly sad and disappointed. He believes that Cindy didn’t really like him at all. Mia tells you to prove to Larry that Cindy cared for him! Present Larry with the Statue. Cindy took this awkward clock with her on her travels, and Larry made it especially for her. Cindy did still care for him.

But what would happen to Cindy and the Statue will spark a chain of events throughout this game. This is more than a simple story as we delve deeper into your journey.