Episode 2 opens with a phone call between Mia and her little sister Maya. Mia needs Maya to hold on to some evidence for her and arranges for her to come to the Fey & Co. Law offices later that evening to pick it up. However, someone else arrives at the office before Maya, and attempts to take the evidence (which is hidden inside "The Thinker" statue/clock). Somehow he knows about the evidence and kills Mia in order to keep her quiet. Maya arrives at the office as she had agreed, only to find her sister dead. Maya is discovered at the scene of the crime and is accused of the murder. 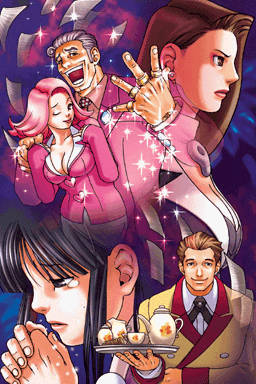 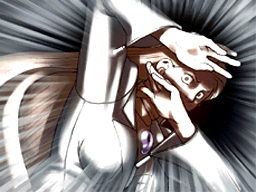 Phoenix was Mia's student. The reason he would defend Maya is that no one else would. Why? Can he defeat a prosecution lawyer with a four-year winning streak?

Maya Fey is Mia's younger sister and has been accused of her murder.

Mia was a defense attorney just like Phoenix. She was Phoenix's boss and owned the office where the crime took place. Mia was investigating something, and the investigation had something to do with the murder, but what was it?

He became a prosecutor at the age of 20. He has a profound hatred for crime and criminals. Many rumors surround Edgeworth and his willingness to do anything to achieve a Guilty verdict. Many believe he is a genius; many think he is corrupt.

April May is a witness to the murder. She was in the Gatewater Hotel when she saw the murder take place. A well-endowed, flirty young woman with pink hair.

The bellboy is an employee at the Gatewater Hotel. He is a very strange character.

Gumshoe is absentminded and can be short-tempered at times. Mostly he is a friendly and helpful character. He has great respect for Miles Edgeworth.

Marvin Grossberg was Mia's mentor and is a defense attorney. Maya was told to ask him for help if she was ever in trouble, however, he is unable to assist her in this case. He has a highly recognizable throat clearing sound.

Redd White is the CEO of Bluecorp. He appears to be very powerful, but what is his connection to the case?