This is the last day of the trial, and you'll be in the courtroom until the end of this segment. Edgeworth will quickly call Dee Vasquez to the stand.

Vasquez's Testimony: The Day of the Murder[edit]

Vasquez' Testimony
- The Day of the Murder -

Before the cross-examination begins, the judge asks how Sal "took" Vasquez. Vasquez informs him about the van. Van is added to the Court Record.

3DS Trilogy Note: The seventh statement is cut and can't be cross-examined.

The Day of the Murder: Cross-examination[edit]

You know that the murder took place during that 15-minute break. You need to find the contradiction in her testimony. Present the Steak Plate on the sixth statement, the one about eating the t-bone steaks. Both Jack and Will ate t-bone steaks in the Employee Area on that same day. The difference is that Jack and Will left bones on the plates; however the plates outside Trailer 2 did not have bones left on them.

When you can, choose "You didn't eat the steak" from the options. If you chose "You ate the bone, too" or "You ate the boneless steak", you'll be embarrassed and decide to re-answer the question. At least you won't get a penalty for that silly mistake. The judge would like to know what she did do with the 15-minute break. Choose "Meeting the Steel Samurai". Now Phoenix will try to prove that Vasquez is responsible for Jack’s death. Vasquez will now challenge you on the battle of wits.

You will now untangle the mystery. Dee Vasquez pushed Hammer onto the fence, next to the Studio Two Trailer, just like five years ago. The resulting chest wound was easily mistaken for a stab wound from a spear.

Vasquez now asks how she could have moved the body to Studio One during that 15-minute break. Choose "She had another way" or "She couldn't handle it". Present the Van to the court.

Vasquez was able to move the body using the Van at Studio Two. She moved it to Studio One and changed the body into the Evil Magistrate costume. At this point, Edgeworth reminds the court that Sal Manella was driving the Van. When asked if he was a conspirator, choose "Of course he was". 'Of course he wasn't' is just a silly excuse and you'll automatically correct yourself.

Vasquez points out that it was possible for her to commit the murder, however there is still no decisive proof. Choose whatever you want but it makes little difference. She doesn’t seem interested. However, just as all seems lost, Edgeworth objects and asks her to testify. Looks like he has a change of heart by turning against her and helping you for the first time. She'll testify about what happened after they found the body. Time for the last cross-examination!

Vasquez's Testimony: After Finding the Body[edit]

Vasquez' Testimony
- After Finding the Body -

After Finding the Body: Cross-examination[edit]

Press the sixth statement, the one about the script and direction notes. Then you can press harder.

Vasquez states that she didn’t bring her notes to Studio One because she didn’t think there would be a rehearsal. When she is asked why she thought that, she says because there had been a murder! Before you catch her out, Edgeworth objects as he realizes that she has incriminated herself. She didn’t bring her script because she knew about the murder before going to Studio One.

Vasquez then changes the last sentence of her testimony:

Vasquez has clearly slipped up again. She said that Hammer had been injured, but it was Powers who hurt his ankle during rehearsal. How could she get them mixed up? She saw Hammer limping when he was wearing the Steel Samurai costume. Present Powers’s(?) Photo on this new statement. Until you reach the next part, select "You saw Hammer limping". You have just proved that she met Hammer while he was wearing the Steel Samurai costume.

Vasquez is now claiming that she had no motive for killing Hammer. She’s trying her hardest to keep up a defense. Can you prove that she had motive? When you can, select "Of course I can prove it!". The only evidence you have that links Vasquez and Hammer is the Five-Year-Old Photo. The incident that happened five years ago must be the motive. Present the Five-Year-Old Photo.

Phoenix will explain the whole blackmail scandal and how Vasquez forced Hammer to become a puppet. However, this would explain why Hammer would want to kill Vasquez, rather than the other way around.

The judge will ask to see the evidence of the motive. You will have to choose "She had no motive". Dee Vasquez killed Jack Hammer in self-defense. He had motive to kill her, but yet he died. This can be the only explanation.

The mystery has been revealed. Jack planned to kill Vasquez. He drugged Powers during lunch and stole his Steel Samurai costume to help cover his tracks. He planned to pin Vasquez’s murder on Powers, but when he arrived at Studio Two, Vasquez killed him first.

At this point, Vasquez confesses to killing Hammer and your client Will Powers is exonerated of all charges.

Will Powers is found... 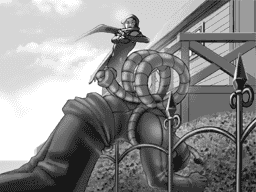 About five years ago, Jack Hammer, Dee Vasquez, and a fellow co-worker, Manuel, were rehearsing for an action film. At Studio Two, Hammer pushed Manuel off the steps and onto the sharp fence of a flowerbed, which punctured his chest, killing him.

A paparazzi caught the moment, but was mugged by Wendy Oldbag, a big fan of Hammer, and silenced by Vasquez before he could release it to the press. Vasquez, with ties to the Mafia, prevented the photo from going to the press and used the incident to blackmail Hammer, whose career went downhill. Eventually he became the Evil Magistrate and was given little payment. After five years, Hammer then decided he had had enough and meant to end it once and for all. To do that, he had to kill Vasquez.

On October 15th, Will Powers injured his left ankle during practice. During lunch later that day, Hammer added sleeping pills to Powers' lunch, which made Powers eventually take a nap.

Hammer then stole the Steel Samurai costume from Powers' dressing room. He then put it on and headed towards Studio Two, dragging his left foot on his way to imitate Powers' injury, passing Oldbag and the security camera.

Hammer reached Studio Two where Sal Manella and Vasquez were coming out of the trailer for a lunch break. Things didn't go as Hammer planned, as Vasquez pushed him onto the fence of the flowerbed during a struggle, and Hammer was killed just like the incident five years ago. In the bushes, Cody Hackins witnessed the incident and took a few pictures.

Realizing she was in trouble, Vasquez, with help from Manella, cleaned up the crime scene. They threw the bloody Steel Samurai costume into the incinerator, and were able to get to Studio One with the body before anyone else, because they took the van instead of walking. Once there, they dressed Hammer in his Evil Magistrate costume and placed the Samurai Spear next to his body. When the body was found, everyone assumed Powers did it, because the murder weapon appeared to be his spear.

Will asks why Jack tried to frame him. Choose "Show evidence" and present Powers’s(?) Photo or the Path to Glory album. Jack was jealous. Jealous that Will was worshiped as the Steel Samurai. Jack used to be the hero star and he fell from grace.

Then Edgeworth will come to tell you he hadn't expected to "meet" again, and warns you never to show up in front of his face again, as he now declares themselves rivals.

Meanwhile, Global Studios decides to keep working on kids' shows, starting with The Pink Princess, which Sal came up with when he first met Maya. You're surprised, since he didn't think the studio would take it seriously.