The trial begins, and Phoenix is curious as to why no one cares that White didn’t testify yesterday. Everyone appears to be acting suspiciously. You can object to Edgeworth calling a new witness, but the judge will take no heed. White takes the stand and prepares to give his testimony. Prepare for a "flashy" showdown because of his desire to show his jewelry and he's the king of the law.

Also before the trial, there's a hint that you knew Miles before. And on the trial, the running gag for Miles is getting people to present themselves by name and occupation. For example, the witness goofs around until Miles blow his temper. That's how it normally works.

He hasn’t really said anything here that you can object to. Instead, press him on his 8th statement. This will make him be more specific. He will then change his testimony to:

The judge asks you to explain this contradiction between the testimonies. But it doesn't matter what you pick since it draws the same conclusion since both Mr. White and Miss May were sitting at the window.

White really did see Mia run to the left. This is because he was actually inside the office. You will be asked to show where Mr. White was standing. Select the area with the "K" (this is where the murderer was standing!) and present. Mr. White looks a little worried, however, you’ll need more evidence than that to get him. Now, he will revise his testimony.

White's Testimony: She Ran to the "Left"[edit]

She Ran to the "Left": Cross-examination[edit]

Check the Court Record. The Autopsy Report says that Mia died from a single blow. This is contradictory to this testimony. Present Mia's Autopsy Report at statements 4, 5, 6 or 7. Edgeworth will try to get a recess (probably to straighten out White’s testimony), but Phoenix and the audience in the courtroom won’t allow it. White will revise his testimony once again.

Press his 1st statement to find out what "that thing" was. He will say that the thing was a glass light stand. Maya will ask you if it seems odd. Choose "Yeah, very odd." Phoenix will press further. White will revise the first statement of his testimony.

The interior of Mia's office.

Have a look through the Court Record. If you check the Glass Shards, it will say that they are broken beyond recognition. The glass light stand was lying on the floor, but there is no way he would have been able to tell that it was a light stand. Present the Glass Shards against this revised statement. You can also present the Floor Plans; the light stand was out of the window's view. It will have the same effect and bypass the next paragraph.

Now Mr. White claims that he saw the light stand before it fell over. Choose "Big problemo". He would not have been able to see the stand through the window. Look at the Floor Plans in the Court Record. The stand was in the corner and not visible when looking through the window; you would have to be in the office in order to see it. The judge will ask you for proof, so present the Floor Plans.

It looks like you’ve got him now. But Edgeworth has another possibility to present to the court. Mr. White was in Mia’s office, but not to kill her. He entered the office to plant the Wiretap!

Press him on all statements. This doesn’t look good. Phoenix doesn’t have anything to catch him on. The judge asks Phoenix if he wants to give up, and reluctantly Phoenix agrees.

All of the sudden Phoenix hears a familiar voice. It's Mia! Luckily for you, Maya is able to channel Mia’s spirit. The ability to do it came about with the shock of Phoenix giving up. Phoenix faints upon seeing this.

When you come to (after waking up and fainting again), Mia tells you to look at the Receipt. As you turn it over, you discover that the Receipt is for the glass light stand, and Mia only bought it the day before the murder! You now have the proof. White could not have seen the light stand when he claims he placed the Wiretap. It wasn’t in the office back then. The Receipt will be updated in your Court Record, and you will go back to the courtroom.

Present the Receipt against any of White's statements. White falls apart and the end is in sight. However, Edgeworth objects and asks for another day to investigate further. Object to this. Mia will hand you a note. She tells you to read it aloud in court. Present Mia's Memo. As it is read, White asks you to stop and confesses to the murder. So much for the "bling". 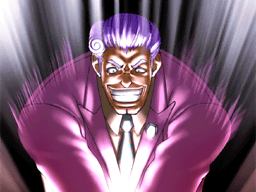 About 15 years ago, a case known as the "DL-6 Incident" involved the police using a spirit medium to identify a murderer. The suspect was found innocent, however. The medium's involvement was somehow leaked to the papers, and so she was considered a fraud and was ridiculed by the nation, forcing her to disappear from the public eye.

Years later, Mia Fey, the medium's daughter, became interested in the case and left her mountain home to investigate. She eventually learned from Marvin Grossberg, her mentor, that it was Redd White, founder and CEO of Bluecorp, that had leaked the case to the press. Mia started to investigate Redd.

Eventually, Redd White himself became suspicious of Mia, so he devised a plan with one of his employees, April May, to place a wiretap in Mia's office to see if he was right. They both then moved to the Gatewater Hotel, so April could place the wiretap in the office, which was across the street. The window of the rented room had a clear view of the room of Mia's office.

One week later, a phone call confirmed White's suspicion — Mia was trying to put him behind bars! So at 9:00 PM, he went to the Fey & Co. Law Offices to take the evidence from Mia. White grabbed "The Thinker", where the evidence was hidden, and slammed Mia's head with it, killing her, believing that death was the only way to shut Mia up forever. White broke the glass light stand (which was bought the day before) in the process of the murder, but not before recognizing it. White then wrote Maya's name on the receipt for the light stand with Mia's blood (he learned Maya's name from the phone call) and left the office with the evidence.

Back in the Gatewater Hotel, April ordered two ice coffees around the same time as the murder. Once Maya and Phoenix arrived, she then called the police, volunteering to pin the blame on Maya, Mia's sister.

Mia asks you to come to the office later that evening. When you arrive at the law offices, you will find Maya waiting for you. She tells you that Mia left her a note that tells her to "take care of Phoenix". The office now becomes Wright & Co. Law Offices, and Maya will stay on to help you out.

Mia then appears (in spirit) and tells you she will be watching you.

The next case involving fiction verse reality will test your mettle against the good guys and the bad guys.