At the office, Mia's spirit leaves Maya, who asks what happened. You tell her that he needs a motive for why Jack would drug Will Powers, steal his Steel Samurai costume and why he was killed. Talk to Maya about what happened while she was absent, then move to the Detention Center.

It's also perhaps a good chance to learn about this court system. This system would allow you, to have up to three days under this game's "Initial trial". You tell Maya that about three years ago, the judicial system has so many cases that they decided to speed up the process. That also means stepping up investigations and finding clues before each court case trial.

So unlike real life, cases will wrap up more frequently then say an average of a week to a month, depending on the circumstances of the investigation. In this case, the more important the trial goes, the more the judge will allow you to investigate but up to the limit of three days before the trial starts.

Will thanks you for doing so well. Talk to him:

Move to the Studio — Main Gate.

Oldbag seems very quiet. Maya suspects she let her guard down, but she still won't let you near those donuts. Talk to her:

Producer Vasquez: Everyone loves her but she was told not to reveal more about her.

Director Manella: He was "treated like dirt" by Vasquez, and he seemed to enjoy it.

Mr. Hammer: She gets fired up and blames you for portraying her favorite star in a dark light in court yesterday.

Move to the Employee Area.

Maya wonders if there are any more clues, since you found the bottle here. However, Gumshoe will stop you before you start searching. It turns out he's looking at the plate for traces of the pills. Talk to Gumshoe:

Move to the Dressing Room.

When you enter, you'll face Penny, who is cleaning up the room since Will Powers won't be needing it anymore, as this week's episode of The Steel Samurai, much to Maya's shock, will be the last. Talk to Penny:

Present the Path to Glory to Penny for proof. Penny will change her mind, but doesn't know what to do about the incident five years ago.

Note: There is an issue where Penny will not show up in the dressing room. Simply, you have to go through all available dialogues mentioned above prior to moving into this place with exception to talking to Maya in your office. If you got here early, it's just a conversation between you and Maya.

Choose "I have proof", then present to her the Steak Plate. She'll believe Will Powers put it there himself. Prove her wrong by presenting the Sleeping Pill Bottle. After seeing the fingerprints, she'll finally confess about the accident. Alternatively, you can show Sleeping Pill Bottle first, follow by Steak Plate to get the same result. She'll calm down and says that she's tired of holding it all in.

When Hammer killed a man, a paparazzi took the picture and tried to send it to the press. However, Vasquez, who is revealed to have ties to the Mafia, was able to silence him. Since then, no one at the studios dares to defy her. Ms. Oldbag will give you the paparazzi's photo of the incident, showing that Hammer pushed the other actor onto the fence of a flowerbed while fighting on the stairs at Studio Two. The actor was punctured by the metal pointed fence and died. The Five-Year-Old Photo will be added to your Court Record.

Move to Outside Studio Two. Along the way, Maya wonders: if Hammer put Will to sleep and stole his costume, then why did he go to Studio Two? And who called him? The producer, or the director?

Once you're here, you'll see Vasquez. Talk to her if you want, but all she cares about is the clouds in the sky. Present to her the Five-Year-Old Photo. She used the photo to control Hammer. She wants to discuss it inside the Trailer, so move there.

Inside, Vasquez opens up about the incident five years ago. It seems she used the photo to blackmail Hammer, and forced him to do her bidding in return for her silence about the "accident". Vasquez will reveal to you a little surprise: Hammer didn't kill the other actor by accident, rather he did it on purpose! Vasquez then says that there's no way she could have blackmailed Hammer if he hadn't done it on purpose. Oldbag said it was an accident, because she was a big fan, as she claimed a few days ago. 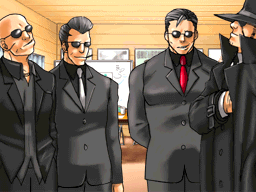 Oldbag ended up with the photo by assaulting the reporter who brought it into the studios. It now remains the only copy in existence, and Vasquez wants the photo. However, Phoenix refuses to give it to her, so she calls her boys to "erase" them, so they won't go to court with this new information. Don't worry though, as Gumshoe will save you at the last moment. Hearing every word, he arrests Vasquez, who says the contest will be decided tomorrow at trial. It looks like you'll get the final chance to cross examine her the next day in court.