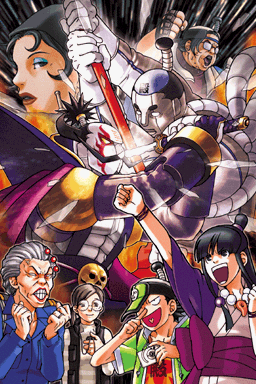 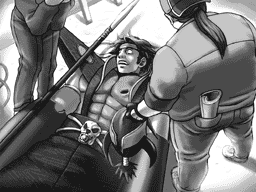 Phoenix doesn't really know about The Steel Samurai at all. This is his first case since he acquired the offices.

Will Powers is an actor. He plays the Steel Samurai in a popular kids' TV show. Will has been accused of killing his on-screen nemesis, the "Evil Magistrate" at Global Studios where the show is filmed. Will is very apologetic and can be pessimistic.

Jack Hammer played the role of the Evil Magistrate on the popular show The Steel Samurai and is the victim in this case.

He became a prosecutor at the age of 20. He has a profound hatred for crime and criminals. Many rumors surround Edgeworth, and his willingness to do anything to achieve a Guilty verdict. Many believe he is a genius, many think he is corrupt.

Wendy Oldbag is a cranky, loud and short-tempered old woman. She is the security guard at Global Studios. She has a soft spot for handsome men and people with authority. She's also Jack Hammer's biggest fan, and doesn’t like whippersnapper young lawyers.

Cody Hackins is a massive fan of The Steel Samurai. He was at Global Studios on the day of the murder.

Maya is Phoenix's helpful assistant. She is also a huge fan of The Steel Samurai.

Phoenix's former boss and mentor, who was a murder victim of the last case. Though dead, she is still able to contact or aid Phoenix thanks to Maya's spiritual powers. She isn't as big a fan of The Steel Samurai as her younger sister.

Gumshoe is absent-minded and can be short-tempered at times. Mostly he is a friendly and helpful character. He has great respect for Miles Edgeworth.

Penny is a friendly woman and an assistant at Global Studios. She collects trading cards and believes that Will is innocent.

Sal Manella is the director of The Steel Samurai. He is a nervous, sweaty man that speaks mostly in internet "leet" speak.

Dee Vasquez is a producer at Global Studios. She is a mysterious woman that doesn’t really speak much. Apparently, she saved Global Studios from closing down completely a few years ago.