From StrategyWiki, the video game walkthrough and strategy guide wiki
< Pokémon Black and White 2
Jump to navigation Jump to search

Welcome to Aspertia City! Larger than any other hometown in the Pokémon series, Aspertia City is home to Pokémon Center, a Trainer's School, and even a Gym, which is the first that you will challenge in your long and arduous journey. You'll also receive your first Pokémon here from a character you'll be pretty familiar with if you've played Black and White. Let the journey begin!

Mom
Your kind, caring mother, who once worked as a Pokémon Center Nurse. You can call her on the Xtransceiver to receive information about the location you are currently in.

The game starts off with a short cutscene showcasing your home town of Aspertia City. You will see your mom walk home and receive a call on her Xtransceiver from Professor Juniper agreeing to give you a Pokémon and a Pokédex. She walks in and announces to you that she is home, so walk over to her and she will tell you the good news. Answer yes to all of her questions, and she will tell you to look around the city for Bianca, Professor Juniper's assistant, who is wearing a "big, green hat." She will then ask you if you know how to operate your Xtransceiver. If you don't know, say no and she will explain it to you. Either way, she will then tell you again to look for Bianca, so go ahead and leave the house.

Making the right choice
Oshawott is considered to be the best starter for beginners, learning a variety of decent attacks further into the game, while Snivy is a good choice for veterans looking for a challenge, being at disadvantage against the second and third Gyms, having many weaknesses, and not learning many good attacks later on. If you want an intermediate level of difficulty, go for Tepig, which has a fairly solid moveset.

As you head north, you will be stopped by your rival, Hugh, and his little sister. They will inform you that Bianca is at the lookout towards the north of town. As you go northwards Hugh will follow you. Behind the houses and the Pokemon Center is a flight of steps. As you climb the steps Hugh will decide to let you talk to her first. When you talk to her she'll ask if you're you, so just answer yes. She will then ask you if you want a Pokedex. Answer yes to that as well. 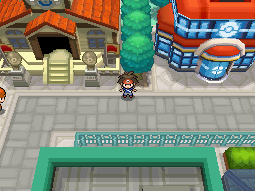 The Aspertia Gym (left) and Pokémon Center (right).
The Aspertia Gym
You can visit the Aspertia Gym now if you want, but it will be closed. However, you can explore the rest of Trainer's school to brush up on some of the basics of the game, such as status conditions and type matchups. You'll have to be patient and wait for a little while before you're able to challenge the Gym Leader. Don't worry, it won't take too long.

Once you're done with that, head southwards. Hugh will stop you and challenge you to a battle, conveniently using the starter that has an advantage against yours. At this point, this makes no difference as it doesn't know any moves of its own type yet. If you just hit him with your damaging attack you should win pretty quickly. You can choose to use whichever status move you have, but it won't do much good, and may cause you to lose. Even if this is the case there's no worry, as all you'll miss out on is a little bit of money and some EXP, and the outcome of the battle has no effect on the following events.

Following the battle, Bianca will give you a tour of the local Pokemon Center. She will show you how to heal your Pokémon, use your PC Box, and buy stuff from the Poké Mart. As a parting gift, she will give you 10 Poké Balls to get started, which is pretty useful as you are about to explore your first route. You can stock up on potions and other things at the Poké Mart if you want, but it won't be necessary until a little later on. When you leave the Pokémon Center your mother and Hugh's sister will show up, giving you running shoes and a town map, respectively. The former allows you to run at any time if you hold down

, while the latter lets you look at a map of the Unova region. You'll be given an additional town map for Hugh too. After you're finished here head northwards towards Route 19. As you pass through the gate, the gatekeeper will give you a free potion.