From StrategyWiki, the video game walkthrough and strategy guide wiki
< Pokémon FireRed and LeafGreen
Jump to navigation Jump to search

It turns out that Silph Co. is being forced to produce advanced technology for Team Rocket. You must reach the top floor and free the company president from Giovanni's clutches. If you roust Giovanni, you won't have to defeat the rest of Team Rocket's agents individually. When you need to heal your Pokémon, look for a woman at the bottom-left corner of the ninth floor. 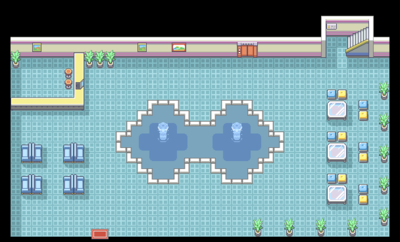 This 11 level building, with 31 trainer battles, only seems difficult. If you know where to go, you can make it to the top and save the President quickly and easily. Then, after scaring Team Rocket away, you can get the items without opposition. You will need the card to open the door for a warping panel that leads to the Rocket boss. While the warping panels are annoying, the items are well worth it!

The first floor lobby is eerily empty, so just advance to the stairs in the back. Note that the guard blocking the entrance to the building won't stand aside to let you in until you've cleared Pokémon Tower.

Note that the red circles on this map indicate the warp points that connect two teleportation tiles with the same letter to one another. Also, Silph Co. is one of the very few buildings that you can use your running shoes in.

Finally, while it is not recommended, you can skip most fights by following the instructions detailed in the Fifth Floor section. 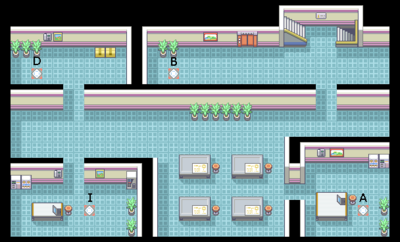 A Move Tutor lady in the northwest office next to the boxes will teach Thunder Wave. 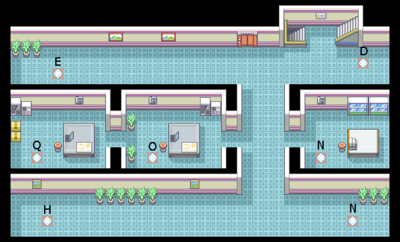 If you need combat experience, don't hesitate to seek out every Team Rocket agent and challenge him or her to duel.

However, if you want a quick end to this situation, follow the instructions from Fifth Floor so you can grab the Card Key, which will open every electronic door in the building. Then come to the Third Floor, and use warp tile O to reach the 7th floor, then step on warp tile P to reach the hallway outside of the president's office.

Read the info in Seventh Floor for information on the the challenges and rewards that await you on that Floor and beyond! 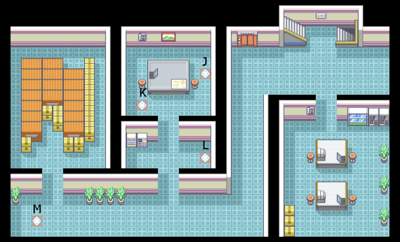 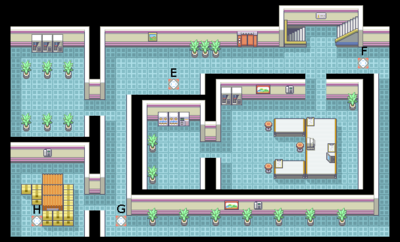 Don't be confused by all the teleporters: The elevator will take you to any floor you want, and you only need to use one series of teleporters to get to the right part of Floor 11.

First take warp tile G, then come back though the same warp tile, and follow the path to the right and you'll find the Card Key. With that you can open any of the locked doors! Check the info in Floor 3 to make your way up to the top!

Be wary of the bald guy on this floor, for he's the one of the only ones to use Psychic-types Kadabra and Mr. Mime. If there's a Pokémon on your front line with low HP, it'll be quickly knocked out, so be sure to put a strong Pokémon on top before entering battle. 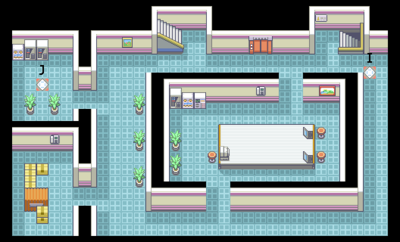 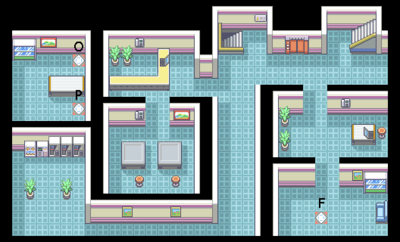 Even if you can best the Rocket members and Scientists here, you'll still be in for a tough fight with Blue. Before stepping out of pad O, make sure to bring a wide variety of Pokémon types to exploit his party's weaknesses and ensure that your Pokémon are at least level 35 or above.

After defeating your rival, go back and heal at either the Pokémon Center, or on the beds located in the Ninth Floor. You only have tougher fights ahead.

Also, this is where you can receive a level 25 Lapras from the person standing at the other side of the room. Lapras can be an excellent addition to your team, especially if you did not choose Squirtle as your starter, as it is a very powerful Water/Ice Pokémon. Step on pad P and head to the Eleventh Floor and your next challenge! 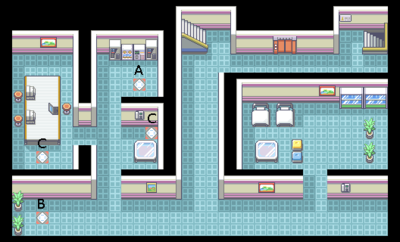 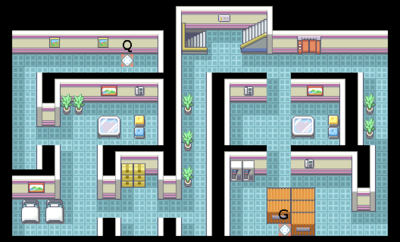 By the time you reach the Ninth Floor, your team is bound to be a bit worse for the wear. Visit the woman between the beds in the lower-left corner of the floor to fully recover your Pokémon's HP and PP. 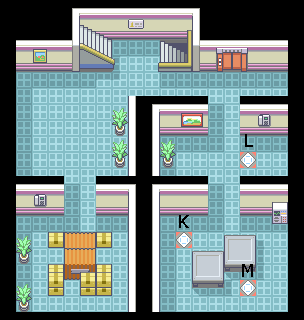 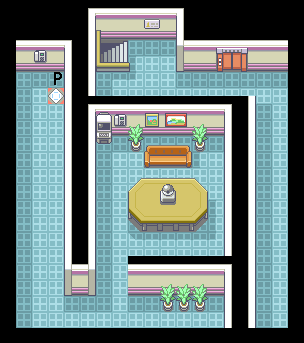 The teleporter right past Gary (P) takes you directly to the Eleventh floor, where players will have to deal with two more Rockets before approaching their boss.

Then there's Giovanni, the leader of Rocket. After you busted up his racket in Celadon City, Giovanni moved his base to Saffron City. It's too bad for him you arrived in time to short-circuit his new scheme. Defeat Giovanni's Nidorino, Rhyhorn, Nidoqueen, and Kangaskhan to rescue the Silph Co. president.

He's not any tougher than Gary, but you'll definitely need to be in peak condition to stand a chance. Before engaging Giovanni, use Dig to warp back to the Pokémon Center, or retrace your steps and take the elevator up to the Ninth Floor, where the girl by the beds will heal you.

Giovanni is tough, but easily beatable if you make use of type advantages. Nidorino is weak to ground, so Dig will make quick work of him here. Rhyhorn is a ground/rock type, so Metal Claw or Water moves work well here. Use a high power attack on Kangaskhan that KOs it in one or two hits. Nidoqueen is a Poison/Ground Pokémon that is weak against Water, Ground, Psychic, and Ice.

When you've sent Giovanni running, the president of Silph Co. will be ecstatic that you interrupted his "meeting" with Giovanni. To reward you for breaking Team Rocket's hold on his company, he'll hook you up with the incredible Master Ball. This technological wonder will catch any Pokémon without fail, but this is the only one you'll get in the entire game, so be sure to save it for a special occasion (such as the Legendary beasts). When you're finished, you can collect the items in the now Rocket-free lower floors.

The next destination on this guide is Fuchsia City, since we jumped ahead to Saffron, as following the game's order Fuchsia City should have been taken on before Saffron City. For example, you can check the order of your Trainer Card badges. Your Pokémon are going to be overleveled, making things even easier. There, you'll get the HM's Surf and Strength.

There are two major routes that you can take: You can head south of Lavender Town, or you can head west from Celadon City. The latter path is quicker (and you can pick up HM 02 Fly, on the way), so it is covered first. But eventually you'll also need to take the other route to get the Super Rod.