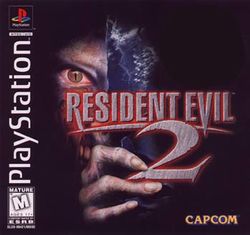 Resident Evil 2 (called Biohazard 2 in Japan) is a survival horror video game released by Capcom on January 21, 1998 (in North America) for the PlayStation. It is the sequel to the highly popular Resident Evil and was later ported to Windows, Nintendo 64, Sega Dreamcast, GameCube, and Game.com (a Dual Shock version was also released for the PlayStation). The player still has the ability to play as two different characters (Leon S. Kennedy and Claire Redfield, who have two completely different scenarios). There is also another added scenario after the player has beaten the game with one character, which must be beaten in order to find the true ending of the game. There are, however, differences from the original: both characters have eight inventory slots each, as well as the ability to show physical damage (such as a character limping when hurt). The player can also quickly push away enemies when grabbed, leading to a much easier title than the first.

Originally Capcom showed the game at Tokyo Game Show 1996, which featured many differences from the current release. The game was supposed to have Leon S. Kennedy and Elza Walker, a college student and motorcyclist (who was eventually replaced by Claire Redfield) and take place in a larger urban setting. Capcom was nearly seventy percent through the development process, but scrapped the entire project in 1997 as they were dissatisfied with the game. They then began to re-work the game and Resident Evil 2 was released a year later.

Claire Redfield: the sister of Chris Redfield and female protagonist of RE2

The game takes place on September 29, 1998, two months and one day after the events in the original Resident Evil. Zombies have now made their way across Raccoon City, as the T-virus has been released in the sewer system and been digested by rats, which then spread the virus to the city's population, animals as well as humans. As the outbreak begins, two figures make their way into Raccoon City: Leon S. Kennedy, a rookie police officer on his first day, and Claire Redfield, a college student looking for her brother, Chris, of the S.T.A.R.S. unit. Leon and Claire quickly find themselves fighting for their lives against massive hordes of zombies in the search for a way out of city. But there's a creature much more powerful than a zombie lurking in the shadows, watching and waiting for the two survivors as they make their escape...