Build a large and utopian city where citizens dutifully fall into line and do not question the government's authority.

There are those who were born to serve and obey. You were born to rule and command. Upon this land, let us establish your base of power, a utopia of loyal and dutiful subjects.

Baselton can be quite easy or hard depending on how you tackle it, also there is more than one way to beat this scenario and several building combinations that work well, but keep in mind the basics of strategic mode: plan ahead and watch the budget. 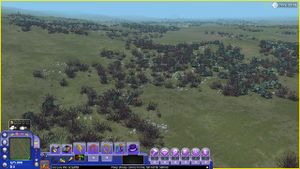 A bit hilly, but very dry.

Baselton scenario landscape is quite rough, but it has no water. It has a lot of bushes, but that isn't important. Try to choose a big flat spot for building your city. Luckily, this scenario can be beaten with a relatively small city so space won't be a major issue. 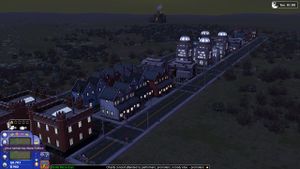 A small science town, the ideal start for taking over the world.

Start by building row houses. These take up a bit more room and the overhead is more expensive, but state housing has a negative effect on your sims and also makes the nearby buildings less effective due the eyesore effect.

Workplaces should be steered well clear of anything that can produce slum lords: they increase the capacity of your houses at the cost to sims health and increase the risk of fires. Concentrate on buildings that neutralise sims moods (those with the green/white swirl in the info card). A town hall or a bureaucracy office with nearby behavioral labs are a great way to start making a bit of money and also give you the mood device ability, which gives any chosen home a light conditioning effect. Also, it's a good idea that you build some departments of public works and also to keep a working on building a fire station.

Venues are a bit tricky at the start. Avoid anything that produces too much happiness. You'll need military schools for the knowledge & authority points, but these venues will not be visited by many sims during the week days. Strip malls are fine but distribution centres are very good as they condition your sims.

Healthcare: beware! Creating a society of ill sims will be disastrous! Working sims will only visit the hospital at the weekend, unless they work 7 days a week, in which case they will probably end up dying from their illness. A sick sim is more likely to become furious and start shutting down buildings.

The benefits of a deficit economy: playing with the budget[edit]

A nice trick is to reduce your spending in all departments to about 65%. Each day some buildings will become inoperable due to poor maintenance, but fear not, the department of public works will be producing work crew 7 days a week and they will soon scurry off to repair the damaged buildings. As long as you have a little buffer zone in your societal values, most buildings will be up and running again by lunchtime. Keep an eye on this. If you see many workers standing around doing nothing, reduce your spending further. If it is taking a while for damaged buildings to be repaired, increase your spending.

Only expand your city with proper planning. Start by choosing a workplace. Take a note of the construction costs, running costs and workforce required. Then take into account the cost to build the housing for your new workers. Also, ensure you have enough venue capacity to cope with a larger population, and if not, choose a new venue that you plan to construct. You may also need another power plant and possibly more decorations for societal points. All these things will need to be built at the same time: there's no point building a workplace if there is no workforce available!

Once you're confident of the final price of construction, ensure that you have that money available at around 3AM of a Monday morning. This should be the point when your treasury is at it's lowest point (after a weekend of businesses being closed). You must maximise the chances that you budget will recover from this spending spree by the following weekend or you risk running out of cash. If that happens, the city will rapidly decline into disrepair beyond the point that your workcrew will no longer be able to keep up. Pause the game and build everything in your plans. Unpause and watch as your income (hopefully) accelerates throughout the week.

Keep up this routine with a focus on authority and you soon will achieve all the scenario goals!

The party line: the power of policies[edit] 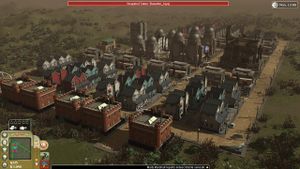 There are some useful policies for the authoritarian cities: planned economy, indoctrination, but an absolute must have is patriotism. It enhances the conditioning of all buildings. If you've been using mood devices in all the housing and workplaces (the workplace mood device is in the behavioral science center, not in the lab) the general city mood will soon fall into the needed parameters. 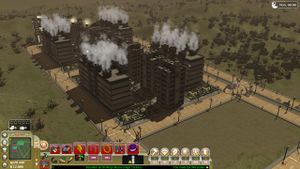 The drone production quarter, the most heavily populated section and one of the most profitable of the city. Note the spacing from the rest of the city and the sad gardens and fences which allow it work properly.

You can beat the scenario with only row housing, military schools, behavioral labs, redistribution centers and the liberal use of iron fences, but a there are ways to speed up the quinquenal plan! The drone factories mix wonderfully with state housing blocks and their advanced versions (the Drone nexus with the State housing project) mix even better to the point where you don't need venues at all! However, all of these buildings are really, really expensive so only try it when you have a strong budget that is able to cope with the hit of building a drone factory and two state housing blocks. If the budget can handle the initial investment soon it will skyrocket due to the gigantic profit made by the drone factory and the production drive ability. If you can try to replace the factory and the blocks by the nexus and the projects as one, the projects won't attract crime and the profits will be even bigger. The biggest disadvantage is the drone buildings and the state housing are huge eyesores and the sims will flood your venues even when they don't need them due the heavy conditioning of the housing and their work.