From StrategyWiki, the video game walkthrough and strategy guide wiki
< Trials of Mana
Jump to navigation Jump to search

Damn. Bucca Island is one of the hardest places in the entire game. Why, we may never know. If you have a lot of difficulty on the monsters here, you may want to take some time to level up. By the time you finally leave the island, you might be level 17 or 18. At level 18 you can Class Change, which will make you much stronger.

Anyway, head left along the beach to see a rather large turtle with a snorkel. This is Booskaboo. You'll see him later. Head back along the beach all the way to the right. The first exit north leads to a Gold Statue. The second exit leads to enemies and the rest of the island.

Keep heading north and you'll eventually hit a river. After defeating the enemies, go along the bridge to the right, and go northeast. Travel through one blank screen and you'll reach the Village of Dark Priests. These Dark Priests are very friendly, and will sell you brand-new armor and weaponry. Buy and equip it, you'll need it in a second. Also, fill up on items. Make sure you have at least 10 or so spare Pakkun Chocolates, Magic Walnuts (if Angela is in your group), and Angel Grails; the fight to leave the island is long and arduous. Finally, talk to all of the NPCs to learn a bit of philosophy and also about the Sea Dweller and his cave. Don't worry about it being sealed; we'll fix that in a few. Before you leave, talk to the totem pole in the center of the village. It's like a Gold Statue.

Now, leave the village and go to the stairs heading north on the northern bank of the river. The enemies here are Cockatrices and occasionally Goblin Lords. Cockatrices will eventually hatch into Cockabirds. The Cockatrices are paradoxically weak to Air. They can also Petrify you. Use a Puipui Grass to heal it immediately, because a Petrified character otherwise does not heal until all other enemies are dead. The Cockabirds can also Petrify. The Goblin Lords are very strong, and will hurt you very badly if you did not buy new armor. If you find the Cockabirds to be very difficult to beat, don't worry too much - some players find that the monsters up ahead are actually easier than these birds.

Follow the path west. At the end of the path, there is a very cool ledge with a nice shot of the island below. There is also a dark rock that looks like the uncarved version of those stone gargoyles. Talk to it and use Gnome. The Cave awaits.

The Seaside Cave is really two parts. The first part is a nice, calm jaunt through a series of caves. The second part is a walkway maze through the innards of Bucca Volcano. You will have a map for this maze, because it is incredibly hard otherwise. 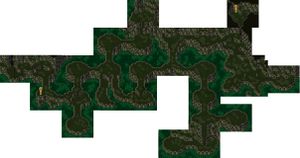 The enemies here are myriad and plenty. The Potos are Light. They can and will cast Heal Light on all enemies on the screen, healing about 120 damage each time. If you have Angela, you can chain-cast Evil Gate. My suggestion is to either focus on the Potos first, or to ignore him until all other enemies are dead, because he'll stop healing when his own health is full. Pakkun Babies hatch into Pakkun Lizards. Sometimes, they'll eat one of your characters. Don't panic; usually this means they're running low on life. Smack it a few times and it'll die, letting you go.