Trials of Mana/Part 7: The Quest for Jinn

From StrategyWiki, the video game walkthrough and strategy guide wiki
< Trials of Mana
Jump to navigation Jump to search

Take off for Palo. It's currently occupied by Navarre ninjas, but pay them no mind — they're hypnotized, so they don't attack you like the beastmen in Jad or the Altenians in Forcena. If you have Hawk, he'll try to talk to Nikita when you see him. Go to the bar located in the middle of Palo. It's literally a hole in the wall. Go upstairs and talk to Eliza. If you have Lise, she'll give you very good directions. If not, you'll see Lise and Eliza whispering, and you can overhear what they're saying. Anyway, keep that flower garden in mind.

Stock up on supplies, and then rest and save. There are new weapons, armors, and helmets to buy here. If you don't have enough money to get all of them make sure you get the weapons first, the armors second, and the helmets last. This next part can be confusing to some. We need to find Jinn, the wind spirit. However, Jinn is inside the Corridor of Wind, which is blocked off at the moment by high-velocity winds. We need to do a handful of things to open up the corridor. 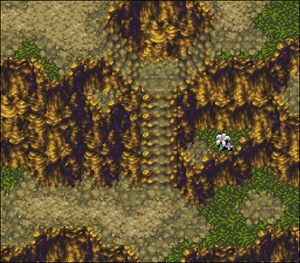 The junction on the Path to the Heavens.

Go ahead and leave Palo on the Path to the Heavens. This dramatically-named climb is actually not so bad. Kill Chibi Demons quickly or they might shrink one of your party members (a very annoying status effect). In general, the way up the mountain to the east is the correct direction. There will be one screen where the path diverges. One way goes north up a staircase, and one way goes east. The northern route leads to the Corridor of Wind, and eventually to Rolante. The eastern route leads to our real destination. Follow that eastern path, and eventually you will come to a meadow. Use the banekujako if you want, and continue on the path until you find a place to rest.

When you come to, you will find yourself at the secret Amazon hideout. Lise will be there if she's not already in your party. Walk around a bit and go into the impromptu war room. The elder will talk with Lise, and eventually he'll suggest that you go visit Don Perignon. However, you need to be able to get into the Corobokkle village, which means you need the amazing, all-in-one, bakes, cooks, and cleans without leaving streaks, Chibikko Hammer! It's in Byzel, in the Black Market. Time to go find it!

Leave the hideout, but instead of going down the mountain, head back to the meadow. There's an Amazon waiting for you. Her name is Merci, and she's yet another relative of Bon Jour. Clearly, he wasn't kidding when he said he was shipping cannons to everyone he knows! Anyway, she'll send you halfway around the world back to Byzel. In Byzel, go to the Black Market, and talk to the new woman there. She'll give you the Chibikko Hammer. Now, catch a boat to Jad.

When you get to Jad, you may want to visit the armor shop and buy the new accessories (and new helmets if you couldn't afford them when you were in Palo). From there, head south into the Rabite Forest. Now, use your memory. There is a gargoyle statue near Astoria, on the path where you first found the Fairy. Go there. If you can't remember where it was, head south to Astoria, and then retrace the path that you took to find the Fairy. When you find the statue, talk to it to open a path, then use the Chibikko Hammer on everyone (it's faster if you target everyone with it simultaneously and use it once) to shrink yourselves. Now, enter the village.

An older Corobokkle will greet you and tell you to look for Don Perignon. Go into all five treehouses and ask for him. After you finish, go back outside and talk to the Corobokkle. He'll reveal himself, and tell you what to do next. After he's finished, it's time to go to the Corridor of Wind and get Jinn.

Go back to Jad, take the boat to Palo, and then go back up the Path to the Heavens until you reach that staircase junction. Go north this time and continue on the path. The Corridor of Wind, like Don Perignon showed you, is a hole in the wall on the left side of a bridge. Go inside.

The Corridor of Wind is pretty straightforward. The green switches rotate all wind god statues a quarter turn. Most of the side rooms are just small turnarounds full of enemies. Fight them if you want. Target Armor Knights first - their Whirlwind Sword attack is painful to your whole party. When you reach an outside platform in the shape of a crescent, there will be three doors: one at the top, one on the right, and one at the bottom. You enter through the one on the top. Go to the bottom door first; it has a Gold Statue. The door to the right holds the Wind Mana Stone and Jinn.

Of course, there's a boss fight. After you see the Mana Stone, pull out your Molebear's Claws and Earth Coins. Go to the right, and confront the Darkshine Knight. After he leaves, you get to fight...

Some people find this boss very difficult to hit with physical attacks. However, if you use the Claws and Coins you purchased for this fight, you should be able to defeat her very quickly (especially if you have Kevin and it's nighttime). Use the Claws on your team for Diamond Saber. Sabers add an element to your attacks and Level 1 (but not Level 2 or Level 3) Techs. You'll find that you do much more damage when Sabered. Take control of your best physical attacker (Kevin if you have him, Duran or Hawk if you don't, Lise if your party is all girls) and do your best to hit her as much as possible. Also, use the Earth Coins and/or Diamond Missile on her. Remember that the Earth Coins will do more damage if you have your character with the highest Intelligence throw them. She knows a lot of Wind spells, including Speed Up, Air Blast, and Air Slasher. She also can pick up and throw members of the team. When she does this, they will fall asleep. Use Puipui grass to cure this, or use the Chibikko hammer on them twice in a row.

After the battle, you gain Jinn. The Fairy will heal him, and he will go with you. Now, it's time to take back Rolante!