After travelling south from Ruto Town, you will encounter a cave that Link must travel through in order to reach the southern portion of West Hyrule. In order to succeed in this endeavor, Link must know the spell of Jump. Once he arrives on the other side, he will arrive on the south side of the cave (label a on the map) 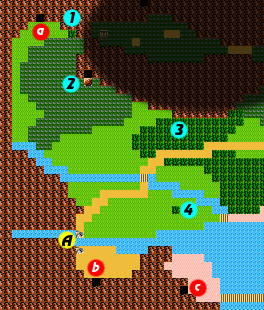 When you exit the cave, you may notice a patch of forest to the right (label 1 on the map). Enter the woods to discover a fairy which you can touch to have your health restored.

Walking through marshlands causes Link to travel at half his normal speed. Ideally, you should travel down the west side of the marsh, where the grass will allow Link to walk at normal speed. However, if you explore the area to the left of the boulder which blocks the cave (in the vicinity of label 2), you will chance upon a screen where Link can collect one 1-Up Doll

, which is worth any amount of effort to reach.

The closest town in this region of Hyrule is Saria Town. It is reached by first crossing a bridge. When crossing this bridge, you will switch to a side view. The bridge itself is rather plain and ordinary. However, the inhabitants under the bridge are anything but. The Bagubagu are piranha-like fish that jump out of the water in search of food. When they land on the bridge, they can actually slither along the surface in pursuit of their next meal. Link must be careful to stay out of their trajectory or path, as these ferocious fish can be quite harmful.

Once on the other side, Saria Town is within reach. However, by taking a small detour to the patch of woods (label 4 on the map), Link can find a 100 point bag waiting for someone to claim it. Watch out for the bouncing Megmats that guard it, however. From there, head to Saria Town.

Saria Town appears peaceful like all other towns. However, it probably won't take long before Link begins to notice something fishy about its citizens. Every now and then, after chatting with one of them, they will suddenly transform into a bat, capable of attacking Link! The dark curse of Ganon appears to be spreading. Speak carefully with the townsfolk. (Here is a general rule of thumb. Townsfolk with no information—women in red with hats, women in blue without hats, and walking adult men—are the ones that may turn into bats. Anyone with anything important to say to you, such as a healer, is always safe.)

In front of the second house of the first segment of town, you may notice a woman pacing back and forth in front of her house. She will complain about having lost her mirror. Further on, in the second segment of town, you may notice a small house with an open door. Inside, the house will appear deserted. However, if you take the time to examine the space below the table, you will discover the lost mirror. Take the mirror back to the woman, and she will be so grateful, she will invite you into her home. Inside you will meet the Wizard of Saria Town who can teach you one of the most valuable spells in the entire game, the spell of Life . It will be expensive to use at first, but this invaluable spell can spare you from the jaws of death.

At the far edge of town, you will encounter a strange feature; the opposite exit of the town is only accessible on the other side of a river, and the man who guards the drawbridge will not lower the bridge without the proper credentials. In town you may have also discovered a sleeping Bot in an otherwise empty home. Talking to the Bot will be fruitless the first few times, but he will eventually wake up. Quite annoyed at you, he will tell you to leave him alone, and that his master can be found in the woods north of the River.

Exit the town and cross back over the bridge, dodging the Bagubagu fish once more. If you explore the wooded region to the north of the bridge, you may notice that walking on several tiles will automatically draw you in to a side scrolling view where teams of Megmats hop back and forth between tree stumps. Continued exploration in this region is necessary, however, since you are in search of the master of the Bot from Saria Town. Eventually, you will stumble upon a particular tile in the woods (label 3 on the map) where a house can be found.

Enter the house to find the man named Bagu who can provide you with a letter to show the drawbridge guard in Saria Town. Return to the guard and present the letter to him, and the bridge will appear over the water, allowing you to cross to the opposite side, and exit from the south portion of town on the map. Now you must enter Saria Cave (label b on the map) to reach the start of Death Mountain. 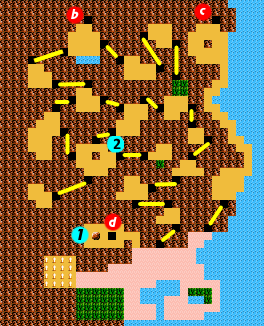 Dare to compare
If you examine the southernmost tip of West Hyrule, you may notice a portion of the land looks a little familiar. The cemetery, the lakes, and Spectacle Rock are all arranged in roughly the same places they were found in the original Legend of Zelda. 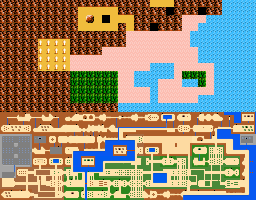 Death Mountain is composed of a series of interlocking cavernous tunnels that span the extent of the region. There are a few dead ends, and the tunnels are infested with some of the strongest enemies that you will encounter in West Hyrule, including the boomerang-tossing Goriya, and the ax-wielding Dairas! As a result of the threat level found around the mountain, it is important to try to traverse through as few dangerous tunnels as possible in your attempt to reach Spectacle Rock below.

From your arrival from Saria Cave, as a general rule, you should always travel to the right, or travel down when right is not possible. This will lead you to the proper cave that places Link to the right of Spectacle Rock. Specifically, you must travel right, right, right (don't use the elevator), right, right, down, down, down. You will still encounter a number of strong enemies, so make good use of your magic spells; Life and Shield especially. When you encounter a Red Daira, remember to jump over the axes that it throws at you, as you cannot guard against them with your shield.

For those who prefer to explore, note that the elevator is labeled "2" on the map. This is actually a single cave with 4 entrances/exits.

Do not be discouraged if your first attempts at Death Mountain seem futile. Continue gathering experience points. Once you reach 1,000 points, your strength level will increase, making it easier to complete Death Mountain.

Once you arrive at the southern region of Death Mountain, you need only travel west a short distance to reach Spectacle Rock. An open cave is available on the right (label d on the map). Right off the bat, you will be greeted by a Red Daira. Defeat it and move on. You will reach an elevator. There is nothing beyond it except enemies, so head down to the floor below.

On the next floor, you will find a Red Daira and some Myus. The Myus cannot be defeated until you learn the Downward Thrust technique. All you will find to the left is a red potion. However, you can use it to restore your health by casting Life just before picking up the red potion. Another Red Daira awaits to the right of the elevator. Defeat it and move on to the next screen.

You must carefully jump over the lava-filled gaps. Be careful of the single Myu that occupies the middle platform. Continue on to the other side, and exit to the next room. You will encounter an orange Daira followed by an red Daira. Defeat them both and collect the item that you've been searching for all along: the Hammer

. Once you have it, you must retreat to the entrance of the cave and return to the outside.

When you return to the outside with the Hammer, try it out on the rock to the left. Step onto the rock's remains and you will fall through a pit, where you will discover a second Magic Container

Note: If you are having trouble reaching the Hammer alive, you may need to spend more time boosting your vitality and power levels. You can also go directly from Spectacle Rock to Mido Town and learn the Downward Thrust technique from the soldier that lives there and return with your new attack method, which generally keeps Link out of harm's way.

You could return to Saria Town the way that you came, but it is far quicker and more useful to return through Mido Cave (label C on the map). Pass through the cave on the far right (occupied by a group of stationary red Octoroks), and wander up the east side of Death Mountain. Pass through Mido Cave to be deposited in front of a long bridge that crosses to the East. Beyond the bridge, you will be able to reach Mido Town.