After shoving off from the dock in West Hyrule, you will float across the water to the dock on East Hyrule. The challenge is greater here, and you will encounter many enemies who are much more difficult to hit, and even harder to kill. Wizards in the towns of East Hyrule require Link to have a minimum number of magic containers before they award him with their spells. Should you meet them without having collected the minimum requirements (i.e. magic containers), the wizards will tell Link to come back when he's ready. 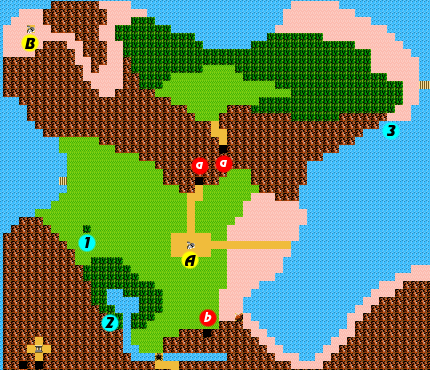 Your first destination should be the town directly to your east. However, it's not such a long detour to visit the Secret Forest (label 1 on the map) and collect the 200 point bag that is contained within. It's very far out of the way, but if you happen to find yourself on the left side of the lake below, you can find the home of a fairy (label 2 on the map) who can restore your health.

The towns in the east are not so different from the towns in the west. You will pick up quite a bit of information here, but the most important tip is to visit a man in Darunia before you travel to the palace. You will come across a woman who complains of thirst. Ironically, her house is situated right next door to a fountain. Since she won't help herself, you'll have to help her out. Walk over to the fountain and investigate it to collect the water, then return to her. She will invite you in to talk to her father. Inside, you will meet a Wizard who will teach you Fire , a spell which allows your sword to fire a ball of flame at any level of health (provided you collected at least one magic container). You'll need it against certain tougher opponents in this land.

There's not much else to do in Nabooru except get healed, so you may as well be on your way. Before we head to Darunia, there's a cave to the south that's worth checking out. Head due south from the town and you'll see a cave to the right of the river devil which blocks your entry to the southern regions of the continent. Head inside the cave, and prepare to cast Fire  if you wish to defeat the two Tektites that live within. In the next segment is a Skettlar which you can only hurt when its eye is open. However, you can use the Downward Thrust against this creature at those moments, making it a little easier to defeat. It's guarding a 500 point bag in the back. Collect it at all costs!

Now head north of Nabooru Town to the Nabooru cave. In this cave, a couple of Achemen will swoop down from the ceiling in an effort to attack you. Defeat them and advance until you see the Basilisk. This is another enemy which can only be defeated by employing the spell of Fire . Once you're through the cave, head west to reach Darunia. As you travel through the desert area, you will be forced into a side-scrolling view of a rising slope occupied by Blue Octoroks. They should present little trouble for you. However, immediately beyond that is a repeat scenario, only there are deadly bubbles rising throughout the screen as well. Do your best to avoid them.

Darunia Town appears to be stricken with the same curse as Saria Town, which converts its citizens into bats after you talk to some of them. Be very careful when talking to the wandering townsfolk. There are two lessons to learn in this town. One is from the second soldier who can teach you a new attack technique. Like the first soldier in Mido Town, this soldier is hiding out from Ganon's forces, and you'll need to figure out how to locate him.

In the second segment, you may notice a low-lying building with a solid roof that you can't jump through. If you cast the spell of Jump , you can get on top of it and advance to the right on top of the roofs. Eventually, you will return to the first house, with a chimney. Jump on to the chimney and squat down, and you will drop into the house below. There you will find the soldier, who will teach you the technique of the Upward Thrust (hold

while jumping). This will be helpful against floating enemies such as Moas.

The second lesson is from the town's Wizard, but the only citizen who appears to need help is an old lady in the third segment of town who asks you to rescue the kidnapped child who has been taken to "the island." The island in question here is Maze Island, far to the east. When you are prepared, leave town and make your way back to Nabooru Cave, and onward to the long bridge that leads to Maze Island. Along the way, if you search the edge of the beach (label 3 on the map), you will discover an extra 1-Up Doll

In an unusual twist for the game, the trip across the long bridge to Maze Island is instantaneous. Just set foot on the bridge, and you will find that you have arrived. 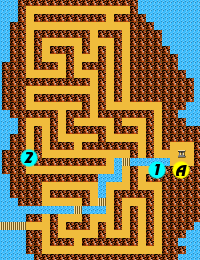 Your first step should be to rescue the child, which is actually quite simple. Take the southernmost route to the east side of the island. Continue along the bottom and travel up the right side and into a dead-end, and you will fall into a pit. The pit is occupied by a single orange Lizardman, probably the first you have ever encountered. Fight him exactly as you would an Ironknuckle. He is guarding the kidnapped child, so defeat the Lizardman and walk to the right to collect the Lost Child

. Now you must return to Darunia Town and return the child to the old lady in the third segment. She will invite you into her home, where you can meet the Wizard who will teach you the sixth spell of Reflect , a spell which is required for the completion of the fourth palace. Link must have collected at least two magic containers to receive this spell.

Once you have the spell of Reflect, return to Maze Island and embark on your quest to reach the palace. You will have to travel through various pathways of the island. Along the way, you will be forced into several side-scrolling encounters. Be prepared to fight against Octoroks, Tektites, and Basilisks. To make the trip worthwhile, be sure to visit the area labeled 2 on the map. If you do, you will fall into a pit and find a Magic Container

, raising your magic meter from six bars to seven. 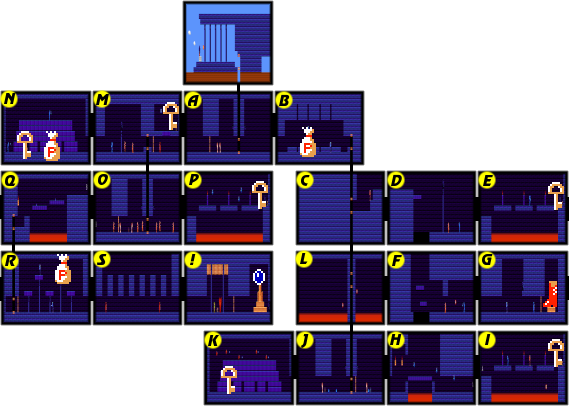 Now that you've obtained the boots, you may notice that you can shortcut the entire island by merely walking along the river. Use this ability to return to the bridge and make it back to Nabooru Town, in preparation for the next palace.