Minera Prison Island is a bit longer than some dungeons. Anyways as you go to the next room. You are brought to a warp point. Not only that, but there's a boss door too (If you haven't saved yet, do so now.) Once you are ready, open the door and head in. 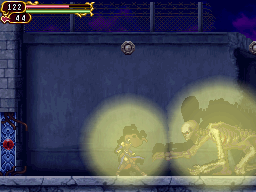 The next boss is a bit harder, but nothing too hard. Ascia and Macir works best here. Try not to get behind him. He'll just stretch back and try to hit you with his arms. If you are getting too close to the wall, use the Magnes glyph and stay there. The Boss will move back, allowing you to repeat this again. Keep on doing this and he'll die.

Once he's gone. Feel free to return to Wygol Village and save (So you don't have to fight that boss again. Now continue onwards. You'll reach a hallway with searchlights around the hall rooms. If you get caught, don't worry, you don't have to fight a Giant Skeleton again. Instead you'll fight a Evil Force. Not really hard. Take him down for some good exp.

Also there are enemies that can drop glyphs when defeated. The Spear Guard drops the Hasta Glyph, a lance attack. Good range for a melee weapon. And the Bone Archer drops the Arcus glyph, a bow glyph. Weak, but can attack from a distance.

Secret Room
In the middle left of the room, attack the wall three times to break the wall open. Head inside and open the chest for a Priestess Ring.

After getting through two of those hallways. You'll be in a room where you can jump on the stairs. To the middle right is a save point. Save and go down the stairs. You'll see a Blue money bag worth 500 gold. Get it and head right. Another hallway with Spear Guards and Bone Archers. There are two red chests in here. The one at the end holds a MP Max Up and the one near the entrance has a Cabriolet. Now leave the room and head all the way up and take a right. Go through the long room and go to the next room. Head down the stairs.

Go right two times. At the next room should be platforms going up. Go up the platforms to the next room, open the chest for a Anti Venom. Also keep note of this room. You can't go up because you don't have double jumping yet. But you'll have to go there to save a villager. Go back down and continue down the stairs. Take a left. The background has changed now. So continue going left. At the end is a chest with a HP Max Up. Go down to the next room and go to the left for a warp point. Continue right, avoiding the trap by getting close to it and moving back. 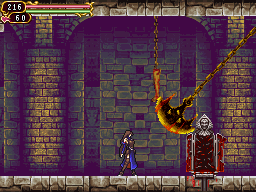 Jump over the iron maiden while avoiding the axe pendulum

The next room you'll find Albus. Scene. Absorb the Dominus Hatred glyph. Although very strong, but it drains your hp. Not recommended to use much. Finish watching the scene and continue right. Be very careful in this room. There are Iron maidens and Pendulums in here. If you get caught in the Iron Maidens, game over. but the Pendulums won't kill you in one hit. So time your jumps right to avoid being hit. After that, continue right.

Heading into the right room. You'll notice a man frozen in a large crystal with the torpor glyph. As always, absorb it to free him. After saving him. Leave the room and go up. Be careful of the creature. It's tough. Defeat him and head left to the next room. Go up to the top and go right two times. Go up to the middle room and use Magnes to reach the top. Open the chest for a Hearts Max Up. Also drop down to the middle level and head right for a save point. Save and use Magnes to reach the top again. Head right. On your way through the long hallway, there's a cat in the upper platform that needs saving. Go up and save the cat. Now go right towards the next room and go down the stairs. Head left for a warp point. Go down to see another statue with a aura coming out of it. Destroy it and absorb the Falcis glyph, a Scythe attack. Good range and damage. Head left to the next room.

Getting the Vol Fulgur Glyph[edit] 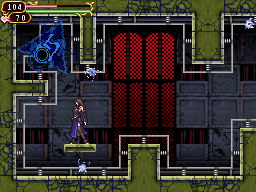 In the next room. You'll see wires with balls of electricity. You'll have to time your jumps right so you jump over the electric ball on the ground and avoid hitting the electric ball from above. At the end lies the Vol Fulgur glyph. Jump on the platform and absorb it. Once it's absorbed. The electric balls will not respawn from the end, allowing easy walking back to the previous room. Exit the room. Now head back to the middle level and head right. Avoid the searchlights as always. But if you're caught. Instead of a Evil Force, it's a tinman. It's very tough. Use glpyh union to defeat it's first phase. After that, it gets easier in its second phase. Get close and duck down to avoid his guns. Keep whacking at him to kill it. Once you defeat it. A chest will appear. Open it for a Strength Ring. Increases Strength. Very good Accessory. Go to the next room. The exit is there. Plus there's a yellow chest there too. Open it for a Glyph Sleeve. This relic allows you to have 3 different slots for using glyph. Example you can have one slot with weapon glyphs and another for magic glyphs. VERY useful relic. Once you got it. exit the dungeon.

At the travel map, the lighthouse is unlocked. Head back to Wygol Village and save. Buy some stuff and head towards the lighthouse.