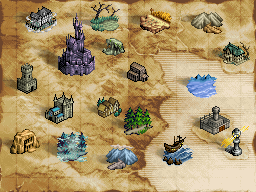 Order of Ecclesia has a linear path from map to map. However, all maps can be revisited. Some maps have areas that are inaccessible until a certain relic or glyph is obtained. Each map has various colored areas. Red rooms are save rooms, blue rooms can warp Shanoa to other blue rooms, and orange rooms are entrances. If there are more than one orange room, then one of the rooms can be picked as the starting point.

Wygol Village acts as a home area. It has a save statue and a jar that refills hearts. After rescuing Jacob, he will open a shop. Finishing quests will unlock more items in the shop. Magical tickets can be used to immediately warp Shanoa back to Wygol Village.

Saving often is important especially before boss battles. Stocking up on magical tickets is a good idea to cut down on travel time when revisiting areas or to quickly get out of a dangerous situation.