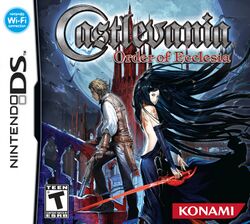 Castlevania: Order of Ecclesia is the third Nintendo DS game in the Castlevania series and was released in North America on October 21, 2008 and in Japan on October 23, 2008. It was developed by the same team that made Castlevania: Portrait of Ruin. It returned to the Gothic art style instead of the anime art style found in Castlevania: Dawn of Sorrow and Castlevania: Portrait of Ruin. Players take on the role of Shanoa, a member of the Order of Ecclesia. The Belmont clan has vanished and Ecclesia is one of several clans that have continued the fight against Dracula.

Returning to life time and again since the ancient middle ages, the evil lord Dracula has driven people to terror. Each time Dracula returned from the dead, the Belmont clan fought him in shadows, wielding the holy whip.

But early in the 19th century, having lost their ability to resist the darkness, those in positions of power at the time began to search for new ways to counter Dracula.

Our organization, Ecclesia, was born then as one of those countermeasures.

Many organizations were established with the same goal, and day after day they conducted their studies diligently, but each was dissolved when they failed to produce satisfactory results.

But that was when Barlowe, the leader of Ecclesia, finally made a surprising breakthrough that could stand up against Dracula.