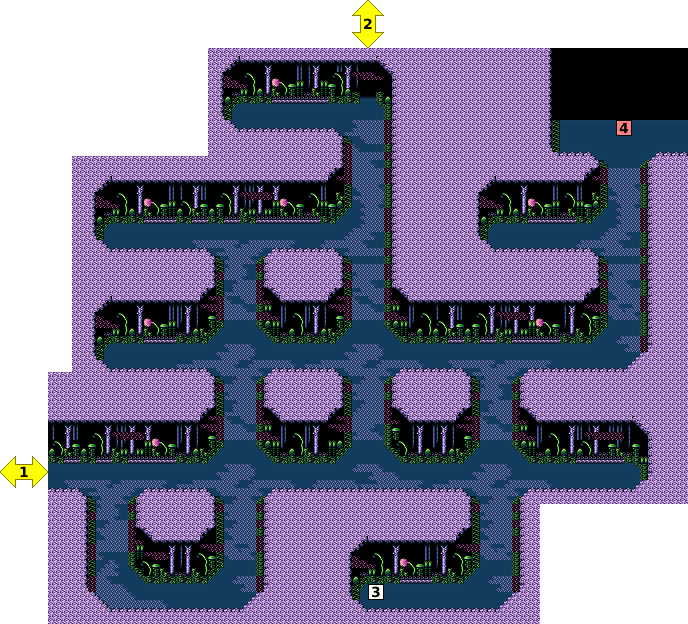 The Poison Forest is aptly named. A noxious miasma covers the forest and will damage you constantly (and more quickly on the GBC version) unless you put on the Gas Mask. Furthermore, it's covered with insects and spore-spewing plants. Head to the north until you reach the village of Oak. Here you will find that no one wants to talk to you. Leave the forest and return to the Cordel Plains, heading to the far north, to the training school northeast of Brynmear.

At the training school
The fact is, according to this post, the first training with Stom is not coded unbeatable. It is just that his movement is so frequent that human players are unlikely to win before Stom is nerfed from third attempt, but a tool-assisted play can go beyond the limit of human skills.

The training school is the home of Tornel, the second Elder, and he will test you by making you spar against his pupil, Stom. This button-mashing competition requires you to press the button to attack as often as possible to push him back to the wall. You are unlikely to win on the first two spars, with you being told that you should return when stronger. This is incorrect; the correct procedure is to fail the first two spars, and win on the third (although there's no harm in spending time to level up.) When you defeat Stom, Tornel will teach you the Telepathy spell, which allows you to speak with animals, and to contact elders at a distance. He will then say he will offer another spell if you can find the Tornado Bracelet. You will do this later, at Mt. Sabre.

You should have everything to return to the Poison Forest and to Oak. 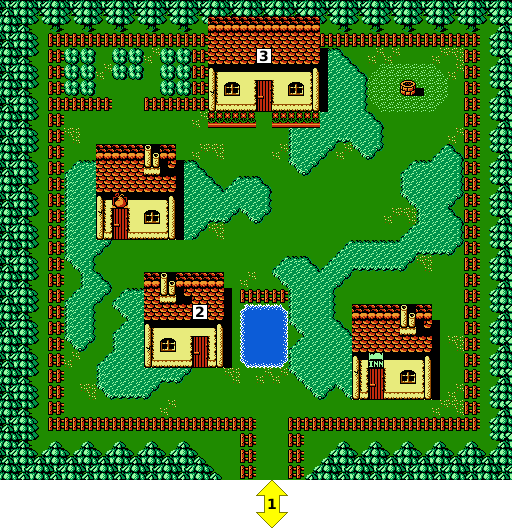 Oak is a small town to the north of the Poison Forest inhabited by dwarves. The first time you came here, everyone just told you to go. Once you gain Telepathy, you find the residents of Oak aren't friendly to humans. However, there is one that needs help. Enter the southwest building, and speak with the dwarf there. She mentions that her son is lost since exploring the forest, and needs to be brought back.

To find him, exit Oak, and head for the southeast corner. Talk to the child and he will follow you. Retrace your steps back to the village (or use Warp Boots). Once back in Oak the child will return to his mother. Return to her house and she will reward you by giving you the Insect Flute.

Rescuing the child earns you the trust of the village, and the other villagers will now permit you to visit their homes and shops. This includes the Elder's House to the north. He will challenge you to defeat the Giant Insect that torments them. To help you with that, he will give you the Sword of Fire, the second elemental sword. You need this to attack the Giant Insect, and it will allow you to attack additional enemies as well. 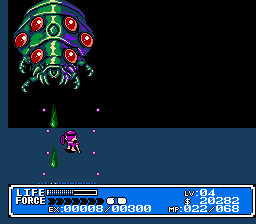 The Giant Instect is located back in the Poison Forest. You need to have the Sword of Fire, and be level 4. It is summoned when you use the Insect Flute just below the large black area at the northeast corner of the forest.

The insect itself is not much of a threat, and will fall with sustained ranged attacks. It's only weapon is a straight downward shot signaled when it stops moving. The shot is narrow, allowing you to attack the giant insect while it is parked.

The battle varies slightly depending on which version of the game you are playing. On the NES version, a green flying swamp insect will fly in and shoot some shots towards you. In the GBC version, there is no swamp insect, but the shots move along with the Giant Insect, requiring you to attack only when it moves. Defeating the Giant Insect awards you the Ball of Fire. Now your Sword of Fire can power up to level 2 and melt ice walls. With this, you are now properly equipped to explore Mt. Sabre. 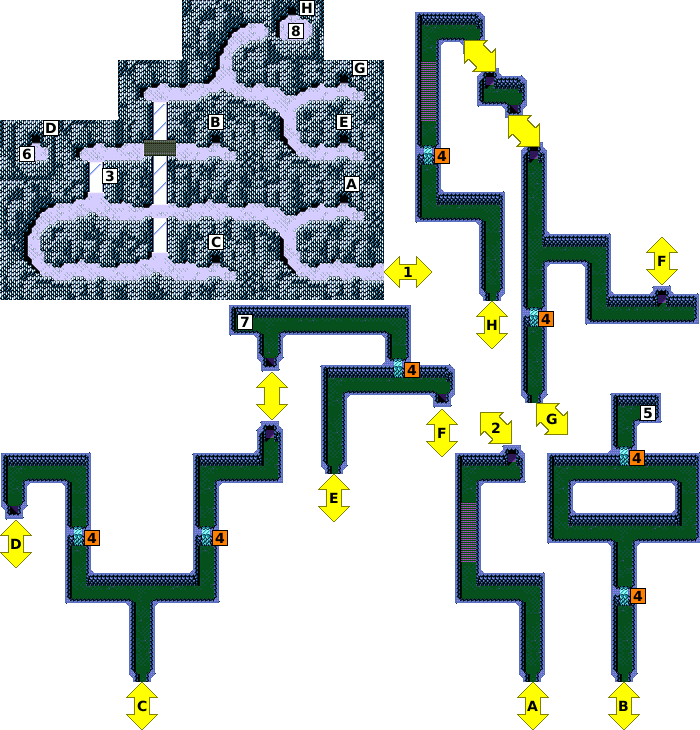 There are two areas of Mt. Sabre. You'll be taking the west path at this time, as the north path is too dangerous for you, and Tornel will prevent you going that way if you try. The entrance to the west peak is in the southwest corner of the Cordel Plains.

The first item to find is the Tornado Bracelet. When you enter the mountain, take the left path, and walk past the first ice cliff. Proceed north after the first cliff; on the NES version, this is another cliff, while the GBC version has a cave. If it is an ice cliff, you need to equip Rabbit Boots to climb up. Regardless of which version you use, you will eventually approach a bridge which you will cross. The cave behind the bridge leads to the Tornado Bracelet. Note that while you're in the caves you'll find yourself having to switch between Fire and Wind to deal with the different enemies inside.

This new item permits you to make Lv. 3 wind attacks. This will cost 8MP when you make the attacks, but inflicts more damage on targets.

You will now need to meet Tornel at the top of the mountain. To get to him, retrace your steps back to the previous cave entrance or ice slope. Continue left and follow the path as it turns downward, and enter the cave at the end.

The fastest route to Tornel is to take the first right branch, followed by a right on the second branch, then turning north. You should arrive outside, where you can meet with Tornel to learn Teleport. On the NES version, you will also find a Magic Ring, which can replenish mana if you somehow used it all; on the GBC version, you need to backtrack to get warp boots (available from the left branch from the lower cave).

At this time, warp to Leaf. You can also travel there, as one of the caves in this area (the one nearest the exit back to the Cordel Plains) is connected to Zebu's cave and blocked by an ice wall you can now melt. Upon arrival, look for clues to where the population was taken, The only living thing left is a rabbit hiding in the woodshed next to the Elder's house, who gives you this information. After that, head to the north peak of Mount Sabre, which is in the northeast corner of the Cordel Plains, north of the entrance to the Poison Forest. Now that you've learned Teleport, Tornel will not prevent you going there anymore, but Zebu will stop you if you have not asked the rabbit.