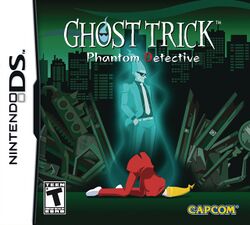 Ghost Trick: Phantom Detective (Japanese: Ghost Trick (ゴースト トリック - Gōsuto Torikku) is an puzzle adventure game released by Capcom for the Nintendo DS in 2010 for Japan, before it was released worldwide the year after. It is made by Shu Takumi, a Capcom writer and game director who also created the famed Ace Attorney series. An iOS version was also released in Japan in late 2010, followed by a worldwide release in 2012. The iOS version, although free for download, has only the first two chapters of the game available as a trial demo, and the following chapters must be bought in order to play them.

This game allows the player to take control of the newly dead protagonist named Sissel on a dark night, who is on a journey to seek out the mystery of who he is and why he was murdered before dawn reaches, where he will 'cease to exist'. To do so, he learns of "ghost tricks", which are special powers of the dead which allow him to possess and manipulate objects, travel over phone lines and even go back four minutes in time to reverse a person's death (that is not his own), which will aid him as he progresses within his adventure to rediscover his lost fate.