After some incredibly lengthy cut scenes, you will find yourself outside Vale, and you have been tasked with retrieving the three Elemental Stars that Saturos and Menardi have stolen, in order to save the world.

First of all, equip the catch beads to Isaac or Garet – this gives you the Catch psynergy. Catch allows you to grab items, usually from trees. If you see a nut (or other object) in a tree, don’t hesitate to try Catch.

Head south along the path until you meet the Venus Djinni, Flint. Flint will demonstrate the basics of using Djinn in and out of battle. 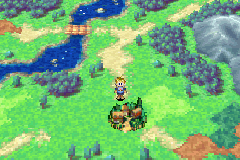 The town of Vault.

Now that that has finished, follow the road along until you reach a junction, and then head south, until you find the town of Vault. Try to enter, and you will be treated to a cut scene of a group of wagons, lead by Master Hammet attempting to travel south, to Kalay. However, the bridge is out, so they head north, to Lunpa.

Once this is over, you now end up in Vault. If you need to heal or regain PP, use your coins to pay for a night at the inn. However, this does not revive your characters, cure poisons or remove curses. To do that, you must visit the town sanctum.

Vault, like every other town, has a weapon and armor shop, and a restorative item shop. If you have collected enough gold coins, visit the shop to upgrade your weapons and armor. This is something you should get into the habit of doing at every town you come across. 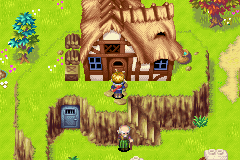 Once you have bought any items you need, head to the mayor’s house, and go inside. Go right to the back, and talk to the boy with blond hair. You will discover that this is Ivan, another Adept. He can read minds, and has far stronger psynergy than you currently do. Agree to help him find his master’s rod, and Ivan will join your party.

To get started on finding the rod, head to the inn, and go up the stairs to the top floor. Go to talk to the two people you find in the room. When they run away, go to leave. You will now try to surround one of the thieves. 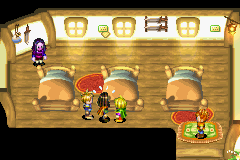 Once you have surrounded one, Ivan will read their mind, and discover that they hid the items somewhere in the inn. Go outside, and head up the ladder on the outside of the inn, and go into the hole. Use your Move psynergy to move the large crate to the left, then jump across the hole in the floor, and go right. You will discover a boy who has been tied up. Go and talk to him to free him, but just then, the three thieves walk in.

After a brief discussion, they will attack! 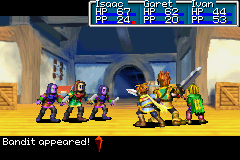 The start of the battle.

This is your first boss battle of Golden Sun, and a fairly easy one. These enemies do not have any particular strengths or weaknesses you can exploit.

Make sure that Ivan attacks every turn with Ray, Garet can use Flare (Fire if you already have it) or normal attacks, while Isaac should use normal attacks, Quake (or Earthquake if you are already level 4), Flint and the Venus summon, or Cure to heal your party. Make sure to concentrate your attacks on the central bandit, as he is the strongest.

Once you win this battle, you will receive the Bandit’s Sword. It is weaker than a Long Sword, but it has a special ability – a weapon unleash called Rapid Smash. It can either be sold for a considerable sum (for this point in the game), given to a character, or kept to be given out later.

After the battle, Ivan will collect the Shaman’s Rod and leave Vault for Lunpa, to attempt to find his master. 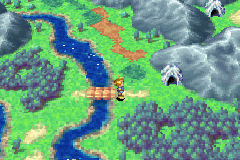 Leave Vault, and head right. Cross the bridge, and keep going right, following the road, until you see a cave entrance. This is the entrance to Goma Cave.

After getting Reveal and successfully crossing the Lamakan Desert, you will emerge near Kalay. The bridge that connects Kalay to Vault was destroyed earlier on, which forced Master Hammet's group to head north, but it is now repaired. Walk north back to Vault. Once you're back in the town, go up near the mayor's house, climb the stairs and walk along the upper level until you reach 4 gravestones and a dog. Jump across to where a man is standing, cross the bridge and go north up to the watch tower. After climbing up the tower, hit the bell up top to scare a Venus Djinni out of the tree. The Djinn will run over to a formerly unreachable area. Walk back south to the area near the dog and use Reveal. Climb down the new ladder to enter the cave.

Inside, you can see a treasure chest, which is actually a mimic. Ignore or engage it, then move on down the left path. In the next room, head right and go through another door downstairs. On this level, you will have to Move a flaming pillar onto a button with a flame on it. This will open a locked door and allow you to progress. Pass through and in here, you will see many puddles on the floor to Frost, as well as a leafy area that needs to have Whirlwind used on it. After clearing the leaves, enter and open the chest to get the Vambrace. Go back out, climb down the ladder, and Frost the puddles. Climb back up, walk to the left and jump across the pillars, then enter the door. Go left, ignoring the door in front of you, then south. Go through that door, and in this room just walk a few steps over and up some stairs. Press a button on the wall to drain the water here, then go back down. Head south and you'll find a set of stairs that descend even deeper. Go through these, and then through the next door.

This will lead you to a puzzle area with more flaming pillars. There are also water drops falling from the ceiling; if these hit the flame, it will go out and moving it onto the button will have no effect. Exit the room if this happens and start the puzzle again. First, move the unlit pillar out of the way by pushing it forward twice. Next, slide the lit one a single space forward; wait until a drop falls on the right side of it, then quickly slide it two pushes to the right. Move it one more to the right and then two north. Move it two left now, and wait for a drop to fall on the left side of it. Once this happens, quickly slide it two to the left, just like before. Push it south once, then around the edge of the boundary just like on the right side. When you stop, it should be resting two spaces away from where the unlit one started. Wait until the drop falls on the right side of it and quickly push it two to the right. Finally, slide it on to the button and go through the newly unlocked door.

This will return you through the door you ignored earlier. The route you took to go down before is now flooded. Walk left and go up the stairs, then south through to the next room. In here, climb down the ladder and go through the door that all the water passed through. Jump across, climb up a ladder and walk right. Go up these stairs and out the door.

Now, you are back in Vault. Go up the stairs and collect Sap, the Djinni you just worked so hard for. Walk back into the door and use Retreat to end up back at the entrance of the cave. You may want to now return to Vale and finish up some loose ends there.