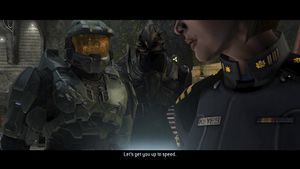 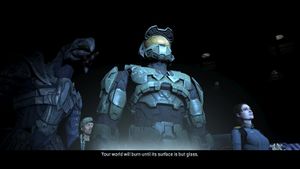 The Prophet of Truth addresses the humans.

In the first cutscene of this level, Master Chief visits Crow's Nest, an old base. After a discussion of the situation with Commander Keyes and the Arbiter, the Prophet of Truth tells us that it's going to get attacked by Covenant. Our mission is to get everyone out of here, including us! 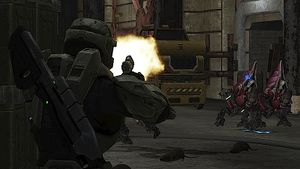 Kill Grunts with headshots from your Magnum.

Walk forward and down the steps. Walk through this room, to the caged box on the other side. You'll pick up an Assault Rifle there. Press the button to open the door, and continue on. When you walk through the next door, you'll pick up a Magnum, and witness a Warthog exploding. Use your Magnum and get headshots on the Grunts that are here, then grab one of their Plasma Pistols.

Push forward, using all the cover available to you. When you encounter the Brute, use a charged shot from the Plasma Pistol to get rid of its armor, then finish it off with a Human weapon or a melee. Once you've beaten everybody here, head through the open door on the left. Push through this hallway. If you want, there is a Battle Rifle here, as well as some Carbines, and an Assault Rifle. 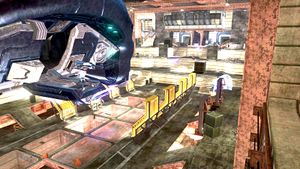 This is the hangar in which you fight.

This next room, a hangar, sends in wave after wave of Covenant. Take them out from afar, using your Battle Rifle, grenades, and the turrets on either side. When you've beaten enough of them, run through and clean up the rest, then fall back and wait for the next wave.

After you beat everyone, a Pelican dropship will be able to launch. When that happens, head back the way you came. Go through the deck in the back, then back through the hallway, and back towards the ops center where you started. You'll be stopped, however, by a swarm of Drones. Use your Battle Rifle or Carbine to take out a few of them, then duck behind cover until your shields recover, then go back at it. There's also a turret on the left side of the room which is useful. Head back through the door to the Ops Center. 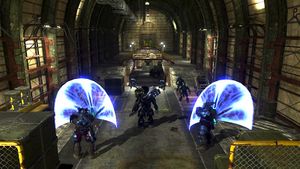 A gang of Brutes is waiting for you!

Looks like there's a bomb being prepared for the Covenant. It's going to go off, so we should get out of here. Head to the door opposite this area and grab one of the Shotguns on the left. Go on through this door to a fiesta of Brutes.

These guys will likely take several tries, so don't feel bad if you die a hundred times. There's a Brute Chieftain with a Gravity Hammer, who you should beat last. Kill the others by Shotgun-meleeing them as they come around corners. If you should be pursued by the Chieftain, run away from him as fast as you can and kill the rest of the Brutes before you deal with him. 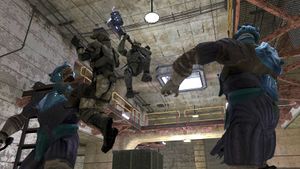 Use your hammer and rain death!

Once you're ready, just start firing shots into the Chieftain. If he uses his Invincibility, just run away until it wears off. You can't stick him, but use ample grenades and any Regenerators you might pick up. If he gets far away, great, and empty your Battle Rifle into him.

When you finally win here, you can swap the Gravity Hammer for your Shotgun (I'd recommend it), head through the open door at the other end of the room. Fall down the pit to begin another Cortana flashback, then walk down this tube-hall-thing and drop down. Ignore the Drones here. Drop down to where the Arbiter is (if you're playing 1-player) and go through the door on the left.

This part is full of Brutes, in every corner. Keep the high ground (use ladders) until you've cleared most of them out, then use your Gravity Hammer to beat the rest of the Brutes. Repeat this process for the entirety of these hallways.