As well as melee weapons such as fiber wire, Hitman: Blood Money features many firearms. Five customizable firearms are in the inventory from the start, but many others can be found in the field; on guards, civilians and targets, in weapons racks, or just lying around. The five customizable weapons are the Silverballer, the SMG Tactical, the SP12 Shotgun, the M4 and the W2000 Sniper Rifle. These weapons are 47's own and leaving them in the field at the end of a mission incurs a fee for their recovery. As mentioned, they can be modified with many different accessories, or upgrades, that can be purchased between missions. Upgrades are organized into five levels for each weapon, with each level of upgrade becoming available as the player progresses through the game, and upgrade costs being tied to the level. The cost of fully upgrading all weapons is $7,075,000. 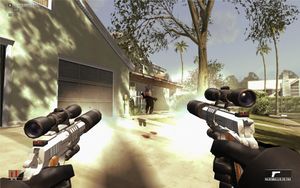 Fully upgraded, dual-wielded Silverballers are lethal, if not overkill to some extent.

The one must-have firearm. While the other weapons in 47's arsenal do have their uses, few are as versatile and practical as the Silverballer, especially considering that most of your kills will take place at close range. If you plan to play in a stealthy fashion, as opposed to shooting your way through every level, you should invest in upgrades that make your pistol quieter and more accurate, so acquire silencers and aim stabilizers as soon as the upgrades become available. 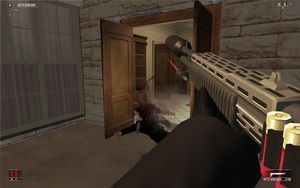 While not exactly discreet, the SP 12 shotgun is a powerful weapon.

The shotgun is an extremely powerful weapon, capable of blasting people halfway across the room. It has two rather big disadvantages, though.

Firstly, it cannot be concealed without using the detonator glitch, and you'll have to pick it up from the ICA crate placed in the level after you arrive. Generally these crates are somewhere near your starting location, but as soon as you pick it up, you'll be fired upon by any guard that sees you running around.

Secondly, the M4 is a much better assault weapon than the SP 12. A fully upgraded M4 is capable of killing people at longer distances, while the SP 12 is only effective at close range and even then can't always be depended on to hit the target. The M4 can also hold much more ammo (one hundred rounds) when upgraded, making the SP 12 somewhat of a marginal weapon. 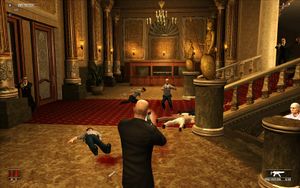 Not very practical for a stealthy approach, the SMG is a helpful means of getting out of sticky situations.

This is a fine weapon, capable of dishing out fully-automatic fire that will drop plenty of people. The main weakness here is that its ammunition capacity is quickly exhausted by the high rate of fire; even after upgrading, you'll have a hard time killing more than a few targets without needing to reload. Still, a plus here is that the SMG can be concealed in your clothes (unlike the SP 12 and M4), making it a good backup if you think you'll need more firepower than your Silverballer can provide. In a pinch, you can also single-fire it at distant targets that are a little too far to be hit with the Silverballer. 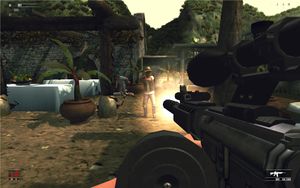 An upgraded M4 is quite the force to be reckoned with.

Like the SP 12, the M4 is non-concealable, meaning that it will be placed in an ICA crate at the beginning of the level. Unlike the SP 12, the M4 is an excellent combat weapon. Decent accuracy, moderate recoil, high power, and large magazine capacity and ammo reserves. If you intend to go through Blood Money as a FPS and not a stealth game, then this is the gun for you. 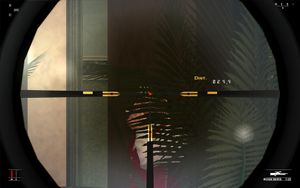 This rifle is going to be useful for a few game missions. It'll allow you to take down a target from an extremely long distance, unnoticed (if you've silenced it properly, of course). An added benefit is that it can be carried in a customized rifle case, to be assembled/disassembled for use wherever you wish. This is much less conspicuous than running around with a huge rifle in your hands. That said, care is needed when constructing the rifle, as being seen in the act will raise the alarm. Generally, a single shot to the body is enough to kill most targets.