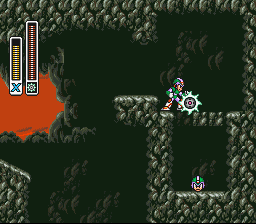 Bubble Crab is a real cool guy. He lives in a deep-sea base and it's up to you to put a stop to whatever it is he's doing down there.

Head into the cave and dispatch the bats. If you have the Spin Wheel, you can drop it on the rocks to the right to grab a 1-up. If not, take the plunge down the hole into the deep. 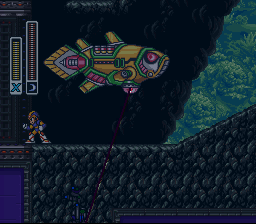 These fish move erratically, so hit them with charge shots to ensure a hit before diving deeper. In this large room, you'll be following a huge fish robot. It shines a spotlight back and forth, and if it catches you it'll fire a laser. You can destroy it by shooting each piece of it, but it doesn't make a difference unless there's an X-hunter you want to fight in this stage, in which case destroy it. If you have the arms upgrade, a fully charged Sonic Slicer or two will decimate it. 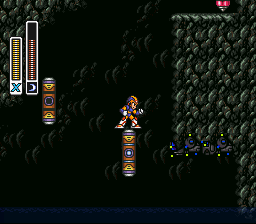 As the rock path heads downward, the large fish robot will open a large horizontal gate. Instead of heading into the large hole, dash jump over the hole and onto the far right wall. Continue to jump up the wall and at the top, you'll find a small alcove with a life pickup one level up in the cave. To get the Heart tank, drop back down to the alcove, stop just before the edge of the wall you jumped up prior. Drop down the ledge to wall cling, and then dash-jump from the very top of the cliff all the way to the left. Hold down the jump to get maximum airtime. You should see one a vertically moving hover platform. If you are lucky you will get it when it is at a low point and be able to grab on by wall-jumping, otherwise just try again. Jump on top of the platform and climb up the second little alcove to find the heart. Continue back down.

As you fall down the hole, immediately hug the left wall to find a hidden room with blue walls. Fully charge a Silk Shot here to get tons of free life energy; nice if you want to fill your Sub Tanks. 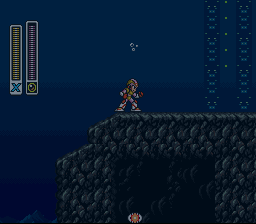 The big fish will continue lumbering on here, and there are jellyfish to deal with now, too. The first pit actually conceals an energy capsule in an alcove.

You will eventually find a different-colored platform, one that looks black and rocky. Go to the center of this platform and fully charge a Bubble Splash. This will make a barrier that allows you to jump higher in water. Jump as high as possible to find yourself a Sub-Tank on the surface. Wait... Bubble Splash? Is that Bubble Crab's weapon? Yes, you will have to come back to this stage after defeating Crab to get the Sub-Tank.

You can get it without the Bubble Splash by grabbing onto the left wall and mashing jump to stay on the surface of the water, but it is tricky.

Back on the sea bottom, did you notice the energy capsule in a locked-up room below your feet? The hidden entrance is from th right. Try a charged-up Silk Shot there. 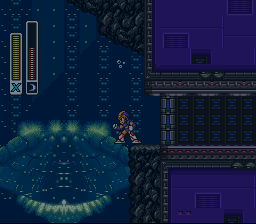 Fork in the path: go left/up for the X-Hunter, go to the right for the Maverick.

Continue on, being wary of the floating platforms and jellyfish.

If there is an X-hunter in the stage, either outrun the fish robot or destroy it and go all the way up the right wall to find the optional boss door where the fish would have docked. For more info on the X-hunter system click here.

If you do not care, head through the passage on the right wall. Turrets and screw enemies will line this hallway leading to Bubble Crab. If you have it, use the Sonic Slicer in the shaft going straight up to deal with the wall hugging enemies. 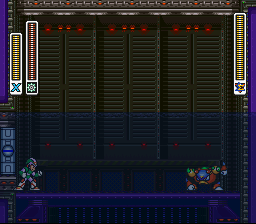 Bubble Crab! It is slow but powerful and it has a bubble shield. It is not the most maneuverable boss. For the most part, it crawls across the bottom of the stage. If you are above it, it will stop, lower its shield, and jump up into you. Every once in a while it will shoot a bubble ring at you, so watch it.

It has another attack that will send a series of bubbles to the top of the room. Inside the bubbles are some smaller crabs in them. If you pop them, the little crab inside will home in on you and blow up.

On the other hand, if you do have its weakness Spin Wheel... release the wheels! It will pop its bubble shield and cause major damage to Bubble Crab.

Bubble Crab gives you the Bubble Splash, that shoots projectiles in an upwards arc trajectory. More interesting, press and hold the shoot button for rapid fire. The charged-up version of the weapon creates a barrier around Mega Man X, and it also allows to float in water.

Bosses weak against this weapon
The Bubble Splash is very effective against Flame Stag and the X-Hunter Violen.