After telling your client that you have amnesia, Maggey decides to help you jog your memory. She recalls that you decided to help her a few days back. She gave you a business card that contains your phone number. Phoenix's Business Card will be added to the Court Record. She then starts to talk to you about the case.

It was before 6 PM. Maggey and Dustin were walking through the local park, when Maggey found a lost phone, which suddenly rang. Apparently, the caller lost the phone in question sometime earlier. He and Maggey agreed to meet up at 6 PM, so Maggey could return the phone. You ask where the phone is now. Maggey tells you she gave it to you yesterday. As soon as she did so, your eyes "lit up". What does she mean by "lit up"?

All of a sudden, a girl barges in. She looks very mad at you, as she tried to call you many times, but didn't get an answer. The conversation reveals her name to be Maya Fey, who gives you a list of people you supposedly asked her to get. According to Maya, it is actually a list of con artists. The Names List will be added to the Court Record.

However, before Maggey can inform Maya that you have amnesia, the court bailiff calls you back to the Court Room.

Payne calls the witness to the stand, but warns that the witness can be a bit smug and overly direct.

The witness introduces himself as Richard Wellington, a first-class University student. Payne has Wellington testify about what he saw.

If you want to describe Richard Wellington, he can be a chatterbox and likes to turn people off with his overly sarcastic remarks.

Wellington's Testimony: What I Saw That Day[edit]

Wellington's Testimony
- What I Saw That Day -

The Judge says that what Wellington just said was "decisive". You need to prove that he isn't.

What I Saw That Day: Cross-examination[edit]

Wellington saw a banana? Present the Baseball Glove on his sixth statement. Compare this to a bunch of bananas. You also admit that you're making fun of Wellington. If you look at it in a certain way, you'll see they both resemble each other. After presenting it, Wellington will mistake the glove for the bananas. When given a choice, choose that Wellington has bad eyesight. Choosing he likes bananas or he knows nothing about baseball leaves the court dead silent because of those silly remarks but lucky for you, you won't be penalized.

Wellington will admit that his eyes are both 20/200. If so, then why didn't he bring his glasses? He says he lost them recently. Did Wellington have his glasses with him when he saw the crime? Judging by his reaction, he probably didn't, and if he claims to have saw Maggey, then it may be possible that he wrongly identified her.

The Judge has Wellington testify further about the crime.

Wellington's Testimony
- What Happened Next -

Present Dustin's Autopsy Report on his second or third statement (Must choose third for PS4). The murder happened at 6:28 PM. It took Wellington 15 minutes to reach the phone. Why did it take him so long to make the call? Wellington says he was searching for a phone booth because he lost his cell phone. Lost his cell phone? Does this sound familiar? Question further and Wellington will say he found it just recently. When asked if there are any more questions you want to ask, choose there is something. Why did he take so long to find the phone booth then? When asked to present the evidence that proves that he didn't have to, Present Crime Photo 1.

Text correction: In actuality, it would take 17 minutes to make the call. Simply a text error that has been overlooked.

If you look closely, there is a phone booth just about a few steps away from the crime. Why didn't he use that phone? Remember the cell phone you are holding. He probably killed Dustin to get his phone back. But why? If he didn't call immediately, then he could have been looking for something. When prompted, choose Yes, I have an idea, then Present the Glasses. Wellington accidentally says that the glasses are his. The glasses were found under the victim's body, so Dustin must have grabbed his glasses when he fell. If that is true, then Wellington could be the killer!

Phoenix wants to know if there is a reason why he is wrong. Wellington recalls the victim's name. You remind him that the name apparently written by the victim was spelled incorrectly. Wellington must have written it, but Payne reminds you that Wellington did not know Maggey when he witnessed the murder. But there has to be some way that Wellington knew of the name. You are given a choice. Choose There was a way. You need to prove how Wellington knew the name. Present the Cell Phone. Remember, Maggey found his phone and told him her name when he called.

Note: Choosing there is nothing would implicate Maggey as a murderer but you'll humorously correct that decision on the first paragraph. Same with No, I have no idea and There was no way. But don't worry, everyone makes mistakes.

Also, pressing the third statement will get detective Gumshoe barking mad when Wellington makes fun of him. This is optional if you find this humorous.

It looks like you have caught Wellington, but Payne asks for one more thing: a motive. What reason did Wellington have to kill Dustin? When asked to present something, present the Names List. The list contains phone numbers taken from the memory of Wellington's phone. The people on this list are actually con artists and assassins! (Assassins for PS4 only.) When asked what Wellington's connection was, answer that Wellington is a member of that group. Since his phone contained such an incriminating list of contacts, he feared Maggey or Dustin would look into the number list. Not a victim of the group or he is looking into the group. Those two choices will give you a penalty.

That is a very explainable motive, but Payne objects. He reminds you that Wellington was promised his phone back, so why get it back in such an unfriendly matter? Try thinking outside the box - was there something Wellington saw that made him commit the murder? When asked what he saw, present Dustin Prince's Profile. Dustin was wearing his police uniform when the murder occurred. When Wellington saw Dustin, he might have thought that Maggey had checked the list of numbers, and brought a police officer with her to ask Wellington questions about the list. Thinking they ran a check, he panicked and killed Dustin to keep him quiet. If that is true, then Wellington killed Dustin because of his uniform!

You have proven Wellington's motive, but Wellington goes berserk. He wants you to prove whose Cell Phone it belongs to. When asked how to prove who the Cell Phone belongs to, choose Fingerprints on the phone?. Not The phone's stored numbers? as it really proves nothing. Maya, however, lets you know you wiped the phone, probably taking the prints with it because of all the sand around it. Wellington reminds you he has his own phone right in his hand and that there aren't any numbers on that cell phone.

You ask him where he got the phone, but suddenly recall something. Just before the trial, Wellington knocked you out with a fire extinguisher. You were holding his cell phone before that happened. So Wellington must have attacked you to get his phone back.

The Judge decides to set Wellington free from the stand. Raise an objection. Or not as Phoenix usually corrects himself. You tell the court you have evidence that proves everything. The Judge decides to give you a chance to present the correct evidence. Present Phoenix's Business Card. The Judge will give you his business card. The Judge's Business Card is added to the Court Record. When asked what makes it an important piece of evidence, choose the back of the card. If you choose the front of the card, you will get a penalty, and if you are playing on the iOS port, you will get the What’s Important Here? achievement as a consolation prize. The back of your card has your phone number and you asked Maya to call it. A phone rings, but the one that is ringing is in Wellington's hand! The ringtone is obviously the "Steel Samurai" theme song!

It looks like when Wellington went to retrieve his phone, he took yours instead!

Congratulations, you have won the first case of the game! 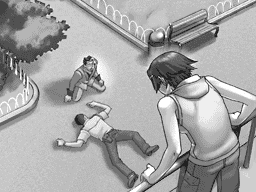 Richard Wellington claimed to be a first-class university student and a "Drifting Virtuoso", but he was actually part of a con group whose names were listed on his phone. One day he lost his cell phone at Exposé Park.

Meanwhile, Maggey Byrde and Dustin Prince, a couple who are both police officers, went for a walk at exactly the same park, where Maggey gave Dustin a birthday present, a yellow baseball glove made to suit, Dustin being left-handed. As they were strolling, they saw a lost cell phone on the ground and decided to pick it up.

Wellington eventually called his phone in order to try and find it. Maggey answered it, and promised him that she would give his phone back at 6:00 PM.

When Wellington met Maggey, he also saw Dustin, still in his uniform. Wellington instantly went into a panic, fearing that Maggey had talked with a police officer and ran a check through his contacts list.

Wellington fought Dustin on a high balcony, with Wellington the victor. Dustin was pushed off the balcony. As he fell to his death, he grabbed Wellington's glasses and took them with him. Dustin snapped his neck after falling 9 feet to the concrete floor below, dying almost instantly. He landed on top of Wellington's glasses, crushing them. As he fell, Wellington saw the baseball glove, which he mistook for a bunch of bananas, thanks to his poor eyesight, and the fact that the glove was yellow.

Maggey ran off, taking Wellington's phone with her. Wellington climbed down to the corpse and spent fifteen minutes looking for his glasses. He eventually gave up and called the police, implicating Maggey for the murder. He then used Dustin's pointer finger on his right hand to write "Maggie" in the sand, unaware that he misspelled the name and that Dustin was left-handed.

Though Maggey is now innocent, Maggey still partly blames herself for Dustin's death. She blames her terrible luck. Throughout her lifetime, Maggey has been plagued with nothing but bad luck and misfortune (failing every single test, prone to hit and run, losing every single game of tic-tac-toe she has ever played, etc.). Her luck, she believes, is probably what caused Dustin's death.

However, Maggey always remained strong and starting now, she will once again try to change everything.

You suddenly remember almost everything in your life - Maya, Gumshoe, The Judge... everyone except for Winston Payne.

You and Maya were reunited about two months ago. The reunion wasn't quite pleasant, though...

As for your cell phone? Wellington erased all the numbers which means you have to get everyone's number all over again! But that's not the issue. You'll slowly recover from the rest of your amnesia until the end of the game.